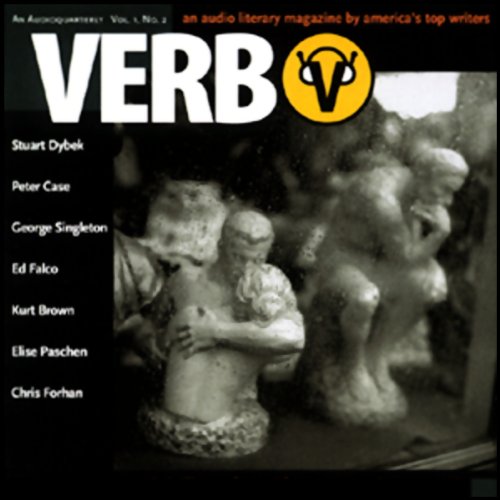 Fiction, poetry, and music come together to create something new: Verb. Original stories and poems you won't find anywhere else, by the best writers in the country, brought to you in an innovative format. Verb is the ancient oral tradition and the venerable literary magazine combined into a fresh new package: the audioquarterly.

This issue contains the following pieces:

"Places, Please" by Ed Falco
What makes smart teenagers do really stupid things? Alice and Carl find out when the clothes start coming off.

"Bomblight Prayer Vigil" by Peter Case
A six-part cycle of "spoken songs" from Americana and blues-rock great Peter Case. He calls this his own "form of jazz".

"Blight" by Stuart Dybek
Ruin, unrequited love, and winos are on display as Ziggy, Pepper, Deejo, and David take a walking tour through their Chicago as the White Sox win the 1959 pennant.

"Shirts and Skins" by George Singleton
Flannery O'Connor once said that the reason Southern writers wrote about freaks is because they could still recognize them. To make it easier for the rest of us, George Singleton groups them all onto one church league basketball team.

Four Poems by Kurt Brown from Sincerest Flatteries: A Little Book of Imitations.

All pieces are read or performed by their respective authors and artists.