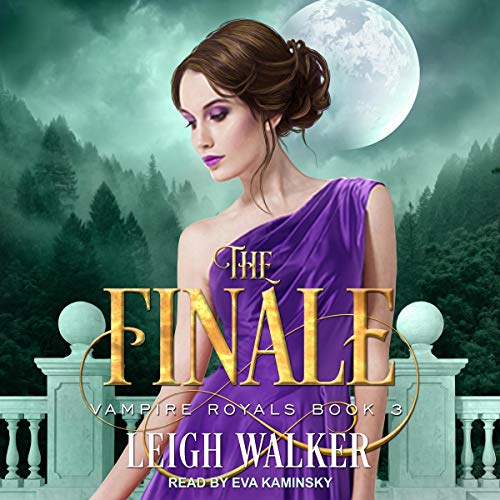 A royal wedding is coming.... But which contestant will be the bride?

Gwyneth West's a finalist in The Pageant, the dating competition that's gripping the settlements. Down to the final week, the dashing Prince Dallas Black will choose one young woman as his fiancee. One small issue: Gwyneth's a human and the prince is a vampire. What's worse? Gwyneth's family are sworn rebels, out to take back the settlements and overthrow the crown. What's worse than that? Gwyn's own rebel brother is a prisoner in the castle dungeons, but the king and queen don't know his true identity.

Gwyneth and Dallas want to show the settlements that vampires and humans can live together in peace. But as their differences threaten to tear them apart, Gwyneth discovers her love puts the prince at risk. How do you choose between love and duty?

I was so happy that I found this series because it's not the very best in regards to this vampire genre but it is pretty great. I am always enjoying listening to this series and really am glad to see the author writing about my favorite story lines and even more so to continue the orginal story line throughout this series unlike other authors who make a wash and repeat series which usually gets your attention in the first book but is so upserring by book 2. Great job Ms Leigh Walker and excellent narration by Eva Kaminsky!;)

While it is highly reminiscent of the Selection series, the vampire twist on this story gives it pizazz and it’s own measure of anticipation. I thoroughly enjoyed the series. Looking forward to reading more in the continuation of the story involved little bro, Austin

I'm an older woman and I do like some young adult fiction but this was really hard to get through at points. it seemed like the narrator was actually rolling her eyes at the dialogue. I think it is good for a preteen though.

Disappointing finish. The story was not good enough to stretch over 3 books. The story continued but not on audio.