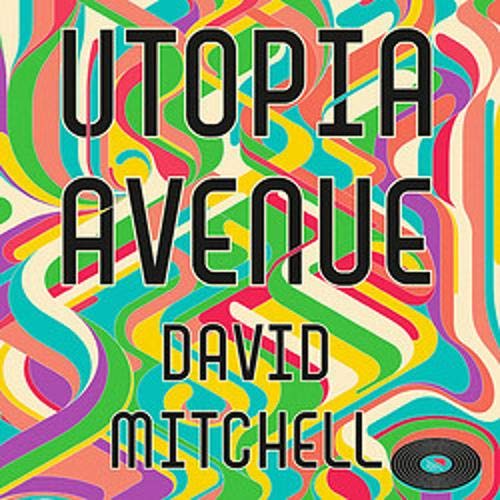 "One of the most brilliantly inventive writers of this, or any country." (Independent)

Utopia Avenue might be the most curious British band you've never heard of.

This is the story of Utopia Avenue's brief, blazing journey from Soho clubs and draughty ballrooms to the promised land of America, just when the Summer of Love was receding into something much darker - a multi-faceted tale of dreams, drugs, love, sexuality, madness and grief; of stardom's wobbly ladder and fame's Faustian pact and of the collision between youthful idealism and jaded reality as the '60s drew to a close.

Above all, this bewitching novel celebrates the power of music to connect across divides, define an era and thrill the soul.

Told from various points of view left me unable to engage with the characters, Elf was the most interesting, Jasper the least.

Great book, even if 60's rock is not your thing

For someone who does not see himself as a music fan, I was first dubious about the setting of the book. After listening to the audio book, I can say that it was surprisingly entertaining and moving, on the same level as my favorite books by Mitchell. The structure is well suited for audio. Most chapters are small stories in their own, connected by the overarching story of the band, so it is easy to listen to. The narration by Wincotts is superb, I especially like his impersonations of Dean and Levon. The Bone Clocks story is kept to mostly one chapter, about which I am glad, because that was not my favorite part.

Bland On The Run

For me, every book by David Mitchell is an event. I love his writing and the worlds he creates, and I really didn’t want to be writing a negative review today. Over the years all I’ve found in Mitchell’s works are positives. I disagreed entirely with the professional critics who found fault in the supernatural elements of Bone Clocks, personally I found the strange alternate existence he conjured, quite brilliant, and I was happy to read that Utopia Avenue would continue with these Atemporal parallel lives. News that he’d chosen to set Utopia Avenue in the mid to late 60s and to focus on the brief life of a band that almost made it, had me genuinely excited for this book. I preordered the hard back (it’s still not arrived), but I wasn’t too miffed, because I had a credit, so I got the audiobook too. And I listened. Almost immediately I was aware that the choice of performer was a problem. He’s a very decent performer, but for me he delivered a tone that gave the characters and situations within the novel , a ‘young adult fiction’ style, cartoon like quality, and I think this was one of the reasons I found it difficult to ever feel there were multidimensional characters peopling this book. That’s the real magic that great fiction can give us, the belief that something exists where there is absolutely nothing, but sometimes the spell gets broken.
He also read very slowly. About two thirds in, I actually chose to speed the book up, and that helped a little.

A song without a hook

So that’s 25 hours that I will never get back. Save for a brief detour down a rabbit hole into one character's mind, 20-odd hours in, this really is just a straight narrative about a made up band.
They have unremarkable encounters with everyone from Bowie and Bolan to Jimi and Janis, yet giving voice to these legendary folk is rather like watching Val Kilmer pretend to be Jim Morrison in Oliver Stone’s film.
And the nods and winks to the author's previous works are equally gauche.
Considerable time is spent repeating made up song lyrics and describing melodies in prose - but unless you understand what a blues riff A G F back to A sounds like then these passages are in turn toe-curling and dull.
Having eventually finished the book, what’s strange is that there’s no real narrative arc. It’s essentially just a litany of events, some good and some bad, but without the insight given by a truthful account or the satirical chops of Spinal Tap.
And while the narration isn't awful, it is rather hammy in places.
One character suggests that “a song’s only as good as its hook” however Utopia Avenue is a book which lacks this vital spark.

Not your usual D Mitch

I came into this book in a very excited state expecting a repeat from David’s usual psych bending storyline. So I was disappointed when it was a story of a band in the late 60s as advertised with all the extras of mind altering substances accompanied by stars of the day with no sign of ghosts past. At times I felt like abandoning the book and maybe get my credit back from Audible for the fluctuating level of my appraisal. But I stuck with it hoping it would go all Mitch, which happily it did. I’m glad I carried on with it because apart from the fact that he is my favourite author after Murakami and Eco, the book brought back so many memories on a personal level of appreciation of the music of the day and it had me reaching for Amazon Music to find solace in my search. For the die-hard DM fans, some might be disappointed as I was at first, but for the story value itself it deserves 5 stars and the narration deserves 5+ as it was a good all round listen.

I've read / listened to all David Mitchell's work over many years, and loved most of it, but this I had to quit. An author resting on some really rather disheveled laurels. Spare yourself!

Sadly it looks like one of the literary world's most original and fertile imaginations has run out of ideas here. Were it not for the Marinus thread I would be genuinely asking if this was written by someone else. The characters are wooden and the events banal. If this were to be made into a TV show it would surely be on ITV on a Sunday night with Nick Berry playing Dean and some ex Corrie star as Elf. Fictional encounters with real life rock stars punctuate the story, and yet every one is no more than a dull stereotype of their famous persona. At one point Dean takes an acid trip with Jerry Garcia, which should have been memorable, but it was actually so dull and pointlessly obscure that it sent me reaching for the 30 seconds fast forward button. Mercifully that was near the end, or I may have just abandoned ship. I'm tempted to say it's worth listening to just for the tantalising horology thread, but it really isn't.

What happened to David Mitchell?

Having read a good many novels by David Mitchell, I was looking forward to the latest. And when I had listened to the first couple of chapters I was still waiting for it to move into gear. With dismay, I realised it was not going to improve. The number of real life characters from the period (early Beatles, Stones, Small Faces etc) who make cameo appearances stretched my credulity to breaking point. Sorry to say it, Andrew Wincott, but your narration was not pleasing to the ear. I abandoned it around a third of the way in. Dreary.

Maybe it needs a remix?

Plenty of good stuff, it's well written, narration is decent enough. But... I didn't find Dean or Elf interesting as characters so sometimes it was a slog and some sections (e.g. Bruce) felt like padding. Too many celebrity cameos too.

Maybe a shorter work, solely from Jasper's perspective, would have worked better and tied in more neatly to the wider DM universe.

If you're a fan it's definitely worth listening/reading, just don't expect a classic.

Doesn’t get hold of you. Definitely not a page turner. I tried but gave up half way.

a novel or biography?

David Mitchell brings a band to life and gives life to each of its members. it is believable enough to be a biography, it certainly records the attitudes of the time I do wish he'd explored the managers life as well as the band members, as a Queer then, he'd be just another gay man now.
I loved the way he reused characters from his previous books, I need to re-read his earlier creations, but will I get the same out of them now, as I did then?
To me, DM, is the Dickens of now.

David Mitchell can do no wrong. He keeps subtly expanding his universe with more beautifully imagined characters and nice references to his other books and to music history. I loved it. Nicely narrated.

Andrew Wincott's narration is odd at times, but he does such a great job with the dialogue that it eventually slips into the background.

As for the book itself, there is enough here for fans of David Mitchell. The fantastical elements in his work should mean you are already tuned for enough suspension of disbelief to accept the truly absurd regularity of famous names. It should also be obvious to anyone who has that Mitchell has never been in a band, or actually had any personal experience of the drugs he writes about. Otherwise, the only other minor gripe is silly overuse of voices that 'detonate'...

It's not his best work, but I can't say I didn't enjoy it.


A road trip of a story with stunning narration

Very much a novel exploring the UK and US music scene of 1967-1968. it will therefore interest some, but might bore others. The signature magical realism of David Mitchell is only playing a tangential role in this novel. The narration by Andrew Wincott is truly outstanding and brings all characters to life.

This is story that is going nowhere with characters who are tedious. Blah blah shit.

I really enjoyed it from start to finish. His view of the mind is extraordinary.

As many have noted, even for fans of David Mitchell's writing this was a hard one. What went wrong? Was it that the narrator, brave and flexible, couldn't , and maybe shouldn't be expected to, conjure up with any authenticity the voices of the familiar- Bolan, Bowie, Brian Jones, Keith Moon, Mick Jagger and Jimmy Hendrix - or fictional - the typical reader of the Daily Telegraph and an Italian promoter? Was it that the integration of the cast of sixties characters became such a cliche that the out dated attitudes of the times appeared clunky rather than cool.
Utopia Avenue attempts to build on something cleverly creative, but aside from it being quite obvious that David Mitchell has never been in a band, its main failing seems to be that it is a clumsy recreation of an era of which has been said "If you remember the Sixties, you weren't there" by an author who having been born in 1969, clearly wasn't there at all. Oops I wrote this review before I had finished the book, I wasn't even going to finish it, but something compelled me to go down the self absorbed slippery slope into the finale which frankly was too much for even a fan of his previous work.. I began to feel like I was absorbing something akin to the madness of one of the characters, we have the appropriation of Indigenous Australian culture and dialogue in German and French. as the story literally shatters through a glass darkly.

As good as any of Ken Follett historical novels. Simply fantastic. Love the characters, the time, the music. Wonderful narration transported me. Thank You David Mitchell.