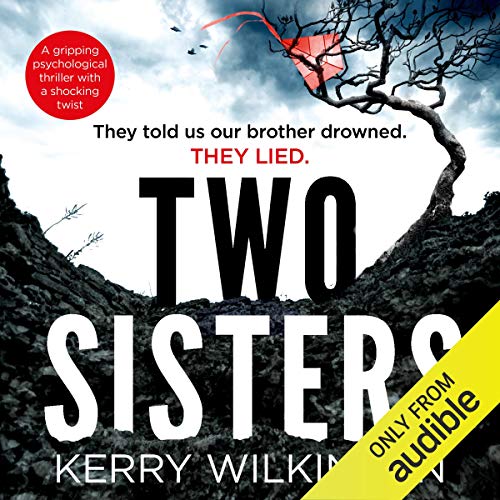 They told us he had been missing for nearly two days, that he probably drowned. They told us a lie.

Megan was 10 years old when her older brother, Zac, went missing among the cliffs, caves, and beaches that surround the small seaside town of Whitecliff.

A decade later, a car crash has claimed the lives of her parents.

Megan and her younger sister, Chloe, return to Whitecliff one summer for the first time since their brother's disappearance. Megan says it's to get her parents' affairs in order. There are boxes to pack, junk to clear, a run-down cottage to sell. But that's not the real reason.

Megan has come to confront her family's past after receiving a postcard on the day of her parents' funeral. It had a photograph of Whitecliff on the front and a single letter on the back.

A totally gripping psychological thriller that will have fans of Louise Jensen, Sue Fortin, and The Silent Child absolutely hooked.

I very rarely rate a book less than 3 stars. This is only the 3rd 2 star rating I've ever given after over 300 audiobooks over the years (I was listening to audiobooks when cassette tapes were the in thing). The narrator is the only thing that saves this book & the only reason I was able to even finish. The story is extremely bland. There are way too many side subjects that never really go anywhere. I'm left quite disappointed.

Last ten chapters were the best

This was OK certainly not a psychological thriller. Wasn't an edge of your seat read

A lot going on, it's simply was not a well thought out novel. The ending was a let down due to the prologue. I found this Audiobook simply unlikabe.
DeAnn DeVille Review

listened from start to finish...struggle. Got really tired of Megan and her food issues. liked Chloe alot

this is the second book I've purchased by this author and the same narrator. hopefully, there is a third one! this is a very exciting book to read full of suspense and deception.

I hate leaving negative reviews …. But the book isn’t what I expected. This isn’t a physiological thriller by any means. Just a mystery that was seriously drug out. I really was not impressed.

Like what about this Ethan ? He’s so crucial to the story but he’s not given a lot of text to develop him as a character. And the rest of the characters were just too many too confusing it focused in the wrong elements

Took awhile getting into the story, but once in enjoyed it. This is my first book I have read bu this author, but will definetely be reading more. The narration was good.

This was a first read for me for this author. The story synopsis intrigued me so I took a chance. Well worth it! The story had some excellent twists, wasn't predictable, and the characters were well-written and held true throughout.
And the narration was beautifully done!
Thumbs up to both author and narrator, I'll be looking for more from both!

I did enjoy the read, but felt like many parts were a little far fetched. Not as conecttable as many I have listened to lately.

The plot was excellent. My only complaint is the fine line that Meghan walked between determined and obnoxious. The narration was ok, but something in the cadence was off - like emphasizing words for no reason. Still, I do like her voice. Overall 3.5.

This book was hard work, i can usually go through a book in a few days but this one seemed to go on forever, I am not saying its a bad book its just not one of the best. it just didn't grab my attention

Would you ever listen to anything by Kerry Wilkinson again?

I love Kerry's Jessica Daniel Series they are amazing so yes defo, and i would read another stand alone book

Have you listened to any of Alison Campbell’s other performances? How does this one compare?

I like Alison's narration on all the books she has read, she has an easy to listen to voice

Was Two Sisters worth the listening time?

Tough question, it was quite predictable and i guessed who the 'baddie' was pretty much straight away so reading it right through and finding i was right was a bit disappointing. but yes, give it a read

The story was quite unrealistic and it would of been good to get to know the characters a bit more, to see them develop to delve more in to Megans eating disorder and her relationship with her mother and the obviouus chemistry between her and Van

The two sisters both have such different personalities but their shared tragedies produce a symbiotic relationship. Exciting, fast paced with a lot of guessing right up to the end. Great narration too.

didnt like the narrator. monotonous. allthough good story. like kerry wilkinson work look forward to next one

The most boring thing I've heard

The narrator is boring. The story is boring. Didn't get past the fourth chapter becaause the plot was BORING...!
Disappointing because I have and love Kerry's Detective stories but then the narrator on those, Becky Hindley, is amazing.
I have sympathy with Alison though - I think even Becky wouldn't have saved this.....

its not often I don't finish a book but just had to give up on this half way through. Not the usual Kerry Wilkinson that Im so fond of.

I expect that this is a good book but, the narrator was very annoying....I made it to chapter 9 and couldn't listen any more. I had to return!

Could have been a Good read,was interesting but the eating disorder and calorie counting got a little annoying at times we new there was a problem and to be honest it was a little whine ,maybe its for a younger reader .the narrator did a good job 😝😝😕😕

The narration was monotone and the story too long for the disappointing ending. Will not listen to other books by this author or narrator

What would have made Two Sisters better?

Would you ever listen to anything by Kerry Wilkinson again?

She just didn't grab my attention like other narrators usually do. And considering 95% of the cast is apparently Cornish, you'd never know it from the voices she gives them.

As the title says, I ploughed through this just to find out what happened with Zac. With the exception of a bit of a twist at the end it was fairly predictable throughout. I would probably have given up on it had he not left revealing the truth about Zac until the last half hour.
Unfortunately I will be returning this for a credit refund.

I’m a bit of a sucker for sister mysteries – there are so many interesting dynamics in sibling relationships that it provides the perfect base for an emotionally charged book. And whilst the plot of Wilkinson’s latest novel is based more around the disappearance of Megan and Chloe’s brother Zac ten years ago, the relationship between the sisters was certainly intriguing and drove much of the storyline.

Despite Megan’s prickly and damaged character, I felt that she was well portrayed and I couldn’t help feeling for her. She is so determined to find out what happened to Zac and get justice for him, and is not easily discouraged, despite the many demons she is battling. Chloe, on the surface the more balanced of the two sisters, seems almost too blasé about Zac’s disappearance, and it is obvious that their parents’ absence during the children’s formative years has done some damage to both of the girls. I loved Wilkinson’t portrayal of these two broken young women, and the undercurrent of something sinister that shadows their time in Whitecliff. There is an ever-present tension underlying the storyline, and I was never sure whose account of events I could trust. Is Megan really a reliable storyteller? Has her anorexia and addiction to prescription drugs from her mother’s stash destroyed her ability to think clearly, distorting her memories and her reality? Or is Chloe the one who is hiding things?

As the events in Whitecliff slowly spiralled out of control, the danger to the girls felt ever more real – but was it? Wilkinson did a great job of messing with my mind and making me question everything I read, and I just love it when a book does that. Despite the picturesque setting of the seaside town of Whitecliff, there was always an air of menace present, and some of the villagers were downright scary. Without giving any more away, tension built as Megan started asking more and more questions about her brother’s last year in Whitecliff, with the villagers closing ranks against her. What were they hiding? And how did their parents fit into all this? There were so many questions and possibilities that my mind was spinning as I tried to follow the trail of breadcrumbs to unravel the mystery. And whilst for me there were a few plot-holes that didn’t quite add up, the portrayal of the small town and the building tension made up for it and on the hole provided a satisfying and intriguing read. Two Sisters was my first book by the author but it certainly won’t be my last!

Has Two Sisters put you off other books in this genre?

Her voice was really annoying as was her delivery