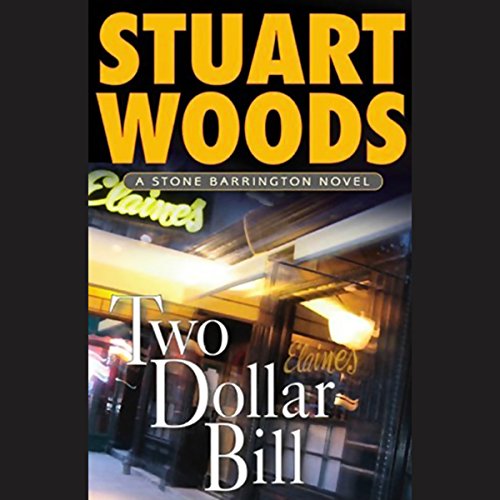 Two-Dollar Bill delivers all the storytelling twists and whip-smart banter readers have come to love in Stuart Woods's thrillers. In this latest, Stone Barrington, the suave Manhattan cop-turned-lawyer, is back on his home turf facing down a brilliant Southern flimflam man.

The fun, and action, begins with what Stone believes will be a quiet dinner with his ex-partner, Dino, but they are interrupted by Billy Bob, a filthy rich, smooth-talkin' Texan, who strolls in and parks himself at their table. He's in town "to make money", he says, unwrapping his wad of rare two-dollar bills, and in need of an attorney, namely, Stone, though he won't say why or when such representation will be necessary. As they leave the restaurant, however, an unknown assailant shoots at Stone and his cohorts, and the wily Southerner has spread his two-dollar bills around to everyone like confetti.

Against his better judgment, Stone offers Billy Bob a safe haven for the night but almost immediately begins to suspect that he's made several precipitous misjudgments, for the slippery out-of-towner has gone missing and someone has been found dead, in Stone's townhouse no less. Stone is now caught between a beautiful federal prosecutor and a love from his past, a con man with more aliases than hairs on his head, and a murder investigation that could ruin them all.

I have been waiting for some time for Audible to carry one of Stuart Woods' books. It has been well worth the wait. This book holds your attention from the beginning to the end. The characters are well defined and since the author has interwoven characters from his other books, they are brought in as an enhancement to his regular readers but they are also incorporated into the story in such a way that new readers aren't left out. I hope Audible will continue to provide more books by this author.
The major difficulty I had with the book was the narration. I like Tony Roberts as an actor and I have thoroughly enjoyed him before when he read non fiction. However, his reading of this piece of fiction was deplorable. He attempts to do voices that all come out the same.A reader needs to do voices only if they are capable to doing them or just read the book without embellishments. Jonathan Marosz, who is usually chosen to read books by Stuart Woods does such a much better job.

Yes! Lots of fun and action...and it gets better as it goes on to the great ending. Yes, it has its unlikely moments, but you don't really notice, as it rolls along well....it's a Stuart Woods book, and one of his better ones. Enjoyable.

It was hard ti get through the story mainly because of the narrator. Mr. Roberts' own voice is not as annoying as when he uses different voices. They all sound the same and are whinny and , well... annoying. I will try to stay away from stories read by this narrator, if only we had more unabridged mystery titles to choose from.

Cliched and (dare I say it?) sexist!

Yuck! There's an interesting plot in here somewhere amidst all the predictable thriller conceits and the "fantastic" womens' bodies. I guess this book would be fun for 16-year-old boys. Otherwise - foggedaboudit!!!

Don't waste your time or money

This is a typical good cop/detective/bad-guy suspense thriller. There was nothing outstanding in the plot or characters. What made the listening almost intolerable was the reading by Tony Roberts. Mr. Roberts reading, well to be blunt, was awful. Most of the characters sound the same, as if from some B-grade mobster movie. The voices for the female characters sounded like something from Gone With the Wind. In some cases a character would start speaking with one voice and end up in another. I wanted to stop in the first five minutes, but kept listening hoping the plot would overcome the reading, it didn't.

I really enjoyed this Barrington Series installment. Stuart Woods keeps me laughing and anticipating throughout each Barrington novel. I love all of the characters and feel as if I know them. I particularly enjoyed the action in this one, and was VERY satisfied with the ending !!!!! .....looking forward to the next one.......

2 Dollar Bill was one of Woods’ most exciting books in the Stone Barrington series! It had a bit of romance, suspense, and a story with more twists and turns than a Disneyland ride. Fortunately ....and as usual....it had a mostly happy ending but with the ever alluring Arrington still out of reach. However, Stone at least.....after 6 years...,:finally got his answer about Peter. ( I would still prefer less use of the F word, however).

Another great story by Stuart Woods. His writing from story to story is fantastic. Can't wait for his next one.

The story held my interest and was overall enjoyable. I am making my way through the Stone Barrington series and I'm noticing the formula so some of the story becomes predictable. I have to agree with previous reviews that the narration can be tough to bare. Characters lose their original voice as the story goes on and Dino's voice is the worst of all in my opinion.

Outstanding! Very good story .. Suspenseful..Great characters were introduced in this novel hopefully Woods will continue with them in is next novel.