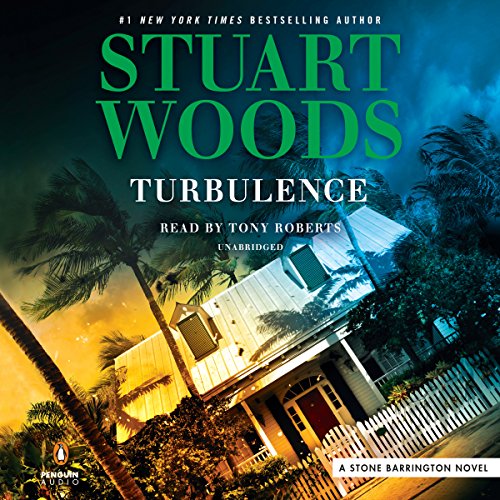 In the electrifying new thriller from number one New York Times best-selling author Stuart Woods, Stone Barrington finds himself pitted against both man and nature.

Stone Barrington and several friends are vacationing in Florida when an extreme weather event puts a damper on their trip. Even worse, the hurricane-force winds blow a powerful, noxious politician straight onto Stone's doorstep. Though they part ways before long, Stone soon learns that he hasn't seen the last of his new acquaintance. It turns out that this official has some shady associates who may have destructive plans afoot, and Stone needs an entree to the inside to figure out their scheme.

With the fate of nations at stake, Stone must summon all of his fearless daring to put an end to the audacious plot...but this time he may be in over his head.

"A world-class mystery writer... I try to put Woods’s books down, and I can’t.” (Houston Chronicle)

“Mr. Woods, like his characters, has an appealing way of making things nice and clear.” (The New York Times)

A total waste of time

Implausible plot, with much too much time spent on fluff instead of the story. The voice of Dino was annoying at best. Time to retire.

I think there is an impostor sitting in Mr. Woods chair. His books have gone from exciting page turners to disappointing and waste of money. Seems that in each book Stone is desperately seeking a reason to globe trot and educate the readers on airplanes, cars and how the super rich live. I returned the previous book, then against my better judgement purchased this one.
This book is my last purchase.

Couldn't even finish it.

I kept reading and was thinking "it HAS to get better!" It did not. I couldn't tell what the plot was. He goes on and on and on and on about things that go nowhere in the story. Worst book I have ever read by this author.

I normally don’t write reviews, but felt compelled to after listening to this book. As a long time Woods fan I found the book wordy, plotless and totally predictable. From the beginning the characters made foolish decisions yet made it through dire circumstances in both, totally unrelated, sub stories in the book. The Barrington character has long left the realm of believability and left the plots of recent books wanting. Goodbye, Stuart, it used to be entertaining.

I've always liked the Stone Barrington books - but for the last several years they have gotten boring, with minimal plots, more outrageous, and so much like a "formula". There was so much in this book that makes so little sense that I don't know where to start. For one thing, Stone has apparently gotten to be one of the richest people on the planet and now owns homes, cars, planes, boats, and countless employees to watch over his "stuff" all over the globe! I realize this is fiction and that all of us enjoy a little fantasy about our favorite characters once in a while - but this is ridiculous. The new characters in the book are not well developed and the old characters seem to be there for...fluff. Tony Roberts is a good narrator, for sure, but all of the books sound the same...and after a while it gets boring. Save your money and listen to something else. I doubt I will ever get another Stone Barrington book... As they say - "That's eight hours of my life that is forever lost...".

I have been a fan of Stuart Woods for years. But I must say his last couple of books have been a disappointment. The Russian storylines are getting old and too far fetched. This book plot was allover the place. I do love Tony Roberts narration of the series.

This was the worse Stone Barrington story I've ever read. Stop or have Stone wake up from a coma and make the last 10 books be a dream.

Very excited for the next where was I at storyline is not very good, is it’s time to stop Stone Barrington Series?

I have read all of Woods books. This one was not as good as most. Story line is weak.

Not one of Stuart Wood's best

I love to listen to Tony Roberts, so I select these novels. This is not consistent with his past stories and has a very short plot that is extended. Why not give Tony Roberts something better to read? Love his voice!