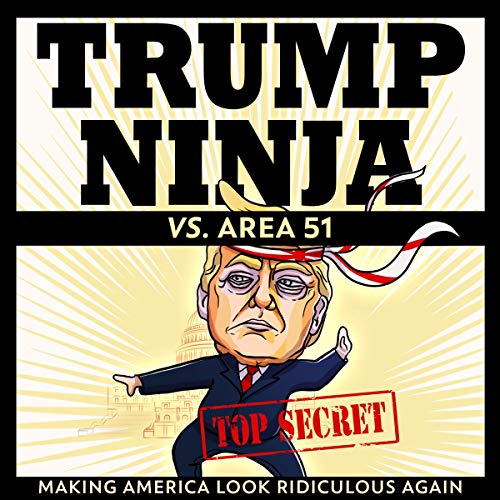 When he’s not making America great again, Trump Ninja fights to save the world from S.N.O.W.F.L.A.K.E., the conspiracy behind the conspiracies.

Trump Ninja. My secret identity. Cat's out of the bag.

I have all the best stories. You want to hear about the time I took down the Eiffel Tower? Flappity-crack. Spider kick. Pam. They never saw it coming.

But this audiobook is about the time I took on Area 51. You've heard of it. Famous. Almost as famous as me. Crawling with aliens.

Build a wall. Keep 'em out.

I’m not even going to build this audiobook up. Usually, I like to sell them a little. What can I say? I’m a terrific salesman. Some people say I'm the best.

But this story is - well, some people tell me it’s being nominated for an award. Maybe a lot of awards.

You’re going to want to start listening to this one right away.

Trump Ninja spin-kicks his way to the best seller list with the super secret history of the most tremendous and best presidency America has ever seen.

Trump Ninja vs. Area 51: Laugh at Him While It’s Still Legalに寄せられたリスナーの声