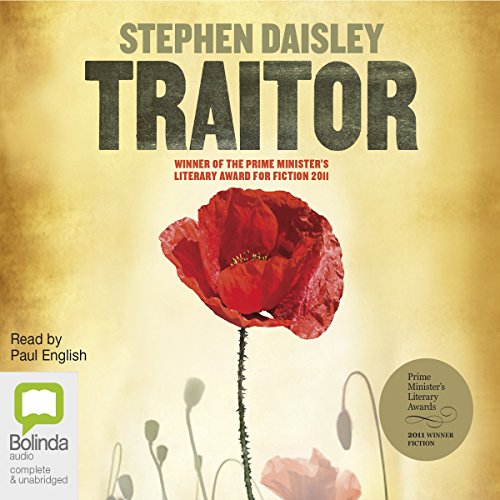 "Daisley’s Traitor is suffused with love, beauty and loneliness. The creation and development of the character of David Monroe is masterful, not least because he is a man of so few words." ( Australian Literary Review)
"Stephen Daisley’s Traitor is one of the finest debut novels I have read. Indeed it’s one of the best novels I have read in recent years." ( The Australian)

Stephen Daisley’s astonishing debut novel is a story of war and of love - how each changes everything, forever. Traitor is that rarest of things: a work of fiction that will transport the listener, heart and soul, into another realm.

What would make a soldier betray his country?

In the battle-smoke and chaos of Gallipoli, a young New Zealand soldier helps a Turkish doctor fighting to save a boy’s life. Then a shell bursts nearby; the blast that should have killed them both consigns them instead to the same military hospital.

Mahmoud is a Sufi. A whirling dervish, he says, of the Mevlevi order. He tells David stories. Of arriving in London with a pocketful of dried apricots. Of Majnun, the man mad for love, and of the saint who flew to paradise on a lion skin. You are God, we are all gods, Mahmoud tells David; and a bond grows between them.

A bond so strong that David will betray his country for his friend.