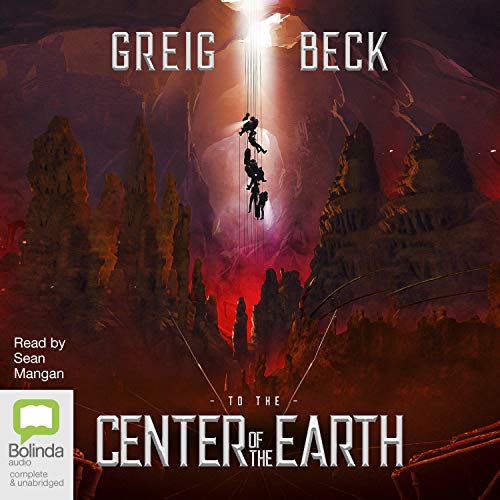 To the Center of the Earth

Down there, beyond the deepest caves, below the crust and the mantle, there is another world. An old woman locked away in a Russian asylum has a secret - knowledge of a 500-year-old manuscript written by a long-dead alchemist that will show a passage to the mythical centre of the Earth.

She knows it’s real because 50 years ago, she and a team travelled there. And only she made it back.

Today, caving specialist Mike Monroe leads a crew into the world’s deepest cave in the former Soviet Union. He’s following the path of a mad woman and the words of an ancient Russian alchemist that were the basis of the fantastical tale by Jules Verne. But what horrifying things he finds will tear at his sanity and change everything we know about evolution and the world, forever.

To the Center of the Earthに寄せられたリスナーの声

I had pre-ordered this book. I can’t even get through the first part because the narration is so awful. Please stop letting this person read books. Please?

To the CENTER of the EARTH
by Greig Beck

Greig Beck is a brilliant writer.

This book finally fulfilled my wish that a good writer would take the concept from the excellent comic book, “Xenozoic Tales", issue number 11; "Primeval", and tell a full length story about it.

This book has also solved several questions I’ve had about Edgar Rice Burroughs' “Savage Pellucidar”. Mysteries I have pondered since I was 14 years old.

Greig Beck has done it. Wonderfully .

The narrator actually pronounces the word naked "nekked." I kid you not. Sorry, no.

Authors and publishers, please screen narrators beyond a paragraph of random text.

So-So, the ending was non existent.

The story was just okay, not really my type. I loved Jules Verne's classic so this digressed way too far. I guess the concept was good however.... What really is a problem for me is that towards the end of the book Beck got in such a rush to end it that all of the character development created was just dropped. There was no resolution to the group or if they even got the prize at the end which had started the journey to begin with.. I guess that once the action ended for Beck he just lost interest. I have lost interest in reading more of his books as well.

The author again revisits a classic story from the past and adds to it. The story here is quite good and, personally, I think more inviting to modern readers, than the original. The characters had some depth and individuality. The threats were unique and genuinely threatening. I enjoyed this quite a bit.

My only criticism is with the narration. It seems somewhat monotone in its delivery. It may be just me but it seems to suck some of the energy right out of the story.

All in all a good book and worth the time and cost. Recommended.

Solid entry from G.B, but not my favorite.

I've been an avid Greig Beck reader for about 6 years now. Stumbled onto the first Alex Hunter novel by accident and have consumed as much of his work as possible since then. I have been VERY impatiently waiting for this book to release and while I wasn't disappointed, it didn't knock my socks off either.

There were several instances throughout the book that made me think of the early Alex Hunter novels. Some of the situations/creatures specifically. At the time I felt it was a little "eh" because it wasn't an Alex Hunter novel. Then there was mention of a certain character (won't spoil it) in a "blink and you'll miss it" bit of dialogue, that might connect this story to the Alex Hunter/Matt Kearns series' . The novel never confirms or denies this connection, so it may just be an "Easter Egg".

Regardless, the book is good. a little long winded in its payoff. Some of it is a little bit of a stretch for me (you'll see when they reach the "swamp"), even for a plot like this. worth your audible credit or $20.

Another excellent book by Greig Beck. when he comes out with a new book I just buy it and start listening. At this point I don't even read the description because every book he puts out is amazing.

I hope there is a sequel. This book was exceptionally good. Very intelligently written and believable science fiction. Notwithstanding it's science fiction and the great danger involved, I found myself wishing to explore the world at the center of the earth described by the book.

Grieg Beck always comes through. Kept me riveted all the way through. Only criticism is there are a few lines of dialog that are a little lame for the characters and the narrator's pronunciation of some words is a little irritating but those are minutia.

A group of cave divers find out about a cave that could go to the center of the earth, they get warned not to as it's hell. They go and (pikachu surprised face) are surprised that it turns out to be hell.

I really like Greig as a horror writer more for his creature creations and details of deaths and destruction. However, the man wrote some of the most boring characters I've ever read in this book. I honestly lost track of who was still around at the end as they were all boring idiots.

Read for the creatures, monsters, and world-building. Slightly hate it for the dumbshit people who go there

Firstly, the performance isn't bad, although it's sometimes hard to follow who is speaking, which I was frustrated with at initially, however it soon became clear this was a function of the writing.

The story is Jules Vernes Journey to the Centre of the Earth except with stupid protagonists. These people really have no clue. Even now I've finished listening, I'm still annoyed at how idiotic they are.

Character development? No, not really. A couple of team members die, and they are barely referenced again.

I've not read or listened to any of the authors other books, although they seem to have good reviews, hopefully this was just a bad day at the office.

MY GOD THE READER WOULD MAKE WORLD WAR 3 SOUND BORING.
THIA STORYLINE HAS BEEN USED SO MANY TIMES

Another excellent story as from Greig Beck, well read by Sean Mangan. From the start to finish there is lots of action. Very enjoyable, well recommended.

exciting story even the scary parts
looking forward to the next book .
I like his style of writing, he keeps me entertained.

Not bad, but lazy writing

I kept going with this book despite it being derivative, repetitive and lacking even basic research. The narrator doesn't have a bad voice but doesn't differentiate between the characters with his voice - which gets a bit confusing at times. He also occasionally sounds like he's had one drink too many before starting to narrate. I've noticed this on other titles too.

The earth has a diameter of almost 8,000 miles so descending to 7,000 miles to the centre is a bit difficult. The repetition of this error throughout the story became a bit irritating.

Still, it passed some time for me.

sh!t the bed that was creepy. good and creepy can't wait for next book.
good story and a new take on an old idea.

Fine enough. Can't grumble about the performance at all. Story is good and enjoyable. Journey to the centre of the earth? It's a classic. My only hang up is how daft some of the characters' decisions are - BUT! Maybe that's just me being conservative

How to lose yourself for a few hours

Really good, especially if you like to suspend reality. Going on to book 2.

Jules Verne wrote the great novel, and this travels in its shadow. While initially interesting and entertaining in the details about caving, the story wilts in the last third, and the narrator wilts with it, making it a hard slog to the inevitable end. Not sure I can listen to any sequels.

this is a great story. looking forward to the next book, thanks to the author

loved it, creatures were were easy to imagine, the world was wonderfully descriptive read

I listened to this non stop over two days as usual Grieg Beck and Sean Mangan (narrator) have outdone themselves.
Grieg is my favourite Author.

I enjoyed the creativity of how the lifeforms and mechanics of the inner earth worked. The characters seemed a little underdeveloped, especially secondary ones, and I felt some of the nuances in personality and intent didn't have plot pay-off. Generally a solid read, and I would recommend.

Loved this one, keep writing Greig. Always an exciting time when a new book is released!
Sean, always a pleasure listening to you. No one compares...

This was fantastic from start to finish. It was so descriptive and the characters were really fleshed out and engaging. The narrator was great, and I finished this book in only a couple of days because I couldn’t stop listening. I’ve just preordered book 2!

To the centre of the earth

I was a little disappointed with this book to be honest. I found the Story was very similar to the Primordia books.
Characters were rather shallow. Not up to the authors usual standard.

i love the team of Grieg and Sean and i really enjoyed this story...unbelievable but terrifyingly real! my only issue is (and please don't hate on me) i found Sean's narrative to be quite boreing...i love Sean..he was the first narrator i listened to but there just wasn't enough "oomph" for this book. i am really looking forward to the second book though 😁

Was unsure if I would enjoy this, but was pleasantly surprised the mix of a new take on an old theme. Paid homage to all past literary attempts, this gave it a air of authenticity, without being a mere copy of past efforts of Jules Verne, Charles Darwin and the many cinematic portrayals.
Narration enhanced the story telling. The sign of a good story where although complete, leaves you wanting more.