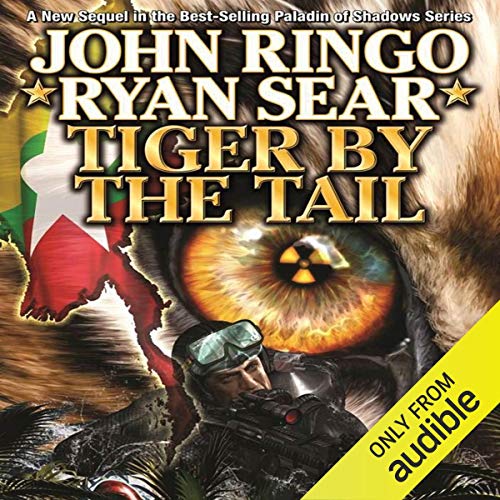 Tiger by the Tail

A new addition to the Kildar military adventure series created by John Ringo. Sequel to Ghost, Kildar, Choosers of the Slain and Unto the Breach.

After saving America from Middle Eastern terrorists, even Mike Harmon and the Keldara could use a vacation. Of course, the Kildar's idea of a vacation includes taking down pirates in the Singapore Straits. But when he finds computer chips designed to run nuclear reactors in the pirate booty, Harmon has a new mission thrust upon him - discover how bottom-feeding thieves got their hands on top-secret technology.

The chips are headed for newly democratic Myanmar, a country vital to American interests in the region. Now Harmon finds himself in a desperate race to learn who stole the chips and why.

From glittering Hong Kong to the slums of Thailand to the swamps of Myanmar, Harmon and his Keldara team follow a trail of death and deceit across the glittering underbelly of Southeast Asia. And as the path winds through dark jungle and slave labor camps to the heart of newborn democracy, Harmon must devise a way to prevent the nasty overthrow of a nation's capital by totalitarian tyrants. But if there's one thing Mike and the Keldara specialize in, it's doing what it takes to give freedom a chance.

Not as good as the first 5 books

Performance of the story is terrific, however ,the basis of the story line does not seem plausible to me. Going all the way to Asia to train commandos in underwater activity and counteracting piracy? The book has a lot of errors (typo's?)..like a several hundred foot yacht that can only handle 20 people?
The story characters are as good as usual, and the narrator is excellent. I hope the next book holds together as good as the first 5 did.

Not remotely part of the series

As others have said, this book was written by Ryan Sear just using John Ringo's characters.

Apart from being a horrible writer, Mr. Sear doesn't seem to "get" the series. The Keldara characters are all flat and interchangeable, where they actually had interesting personalities in the books John RIngo actually wrote.

In the first 5 books, the "bad guys" were terrorist groups. In this one, the "bad guys" are Asian organized crime. How interesting do you think an action book about US special forces vs mafia hitmen would be? This one is worse. A team of elite soldiers takes on an organized crime family's headquarters..now there's a one-sided fight that's not worth the listen.

In between the short and boring action sequences, the author tries to convince us he's actually read the first 5 books. He does this in the from of Grandpa Simpson style style stories interjected at random places that sound like senile ramblings.

The story itself meanders in a similar way, there's no flow to it and no real story. Just a bunch of random stuff happens for no real reason, some of it is loosely related, the Kildar is there for some of it, and the characters do weird things totally out of character.

Even Jeremy Arthur who did a fantastic job narrating the first 5 books sounds like he's having a hard time not falling asleep as he's reading this crap. I can sympathize with him, he really earned his paycheck this time around.

One of the best series I have enjoyed!

The only problem that I might have with the story/series is that there are no more Kildar adventures to enjoy!

I really wish the author would would revisit the storyline!

I love this series

Do not know how I missed this. Great series wish Mr. Ringo had continued it

Time to let it go

A stellar performance. One of the best narrators I've listened to. As for the story, Ringo has lost the edge. His earlier Ghost books were much better; they had a well defined plot, not simply an apparently rambling conglomeration of sex and violence. Ringo now appears to be writing for money, not his fans. It is time to let Ghost go back to Georgia and retire.

Good, but not Ringo's best

This installment of the Paladine of Shadows series seemed to call short of the previous books high standards. It is obvious that Ringo played a supporting told in this novel leaving Sear to attempt to do the majority of the narrative, something Sear was not quite up to. A good nove!, But definitely not up to Ringo's standards.

Loved it. John Ringo does it again. Can't wait for the next one. Bravo Zulu

This is a great book..but with the adult content..be careful on who listens to it

action action action. the author comes up with scenarios that are plausible and implausible at the same time. what they are is entertaining. the action is Non-Stop. beautiful women espionage saving the world good endings. what more could you want.

A great story by a master author

John Ringo is a favorite author. He should write more books and publish more often.

Would you listen to Tiger by the Tail again? Why?

like I said above, it is such a great story line, I cried, and laughed, and wished I had such a talent.

What was one of the most memorable moments of Tiger by the Tail?

The battles, and the way in which they were described, by a very realistic orator? If I spelt that correctly.

Which character – as performed by Jeremy Arthur – was your favourite?

A very difficult question, as I became so involved in the book.

Yes the death of certain characters, who I had wanted to live, but then that is true to life.

keep writing, you have changed the quality of my life, I suffered an industrial injury in 1975, 9 days after I married, I lost my wife, my job and my home,and then in 1999 a drunk drove his car into me, so my life was a bit of a mess, incredibly you lifted that, and brought laughter and tears back into my life, and in simple truth, Life is a gift, to be enjoyed, keep writing.

Just as good as the earlier books in the series

If you could sum up Tiger by the Tail in three words, what would they be?

Continues on from the previous 5 books in the series, so if you enjoyed those then you will like this one also.

But start at the beginning as Paladin of Shadows is a fantastic series and the books and characters do follow on, a must read for any John Ringo fans.

While not hard Science fiction when compared to his other books, this series introduces many of the themes and big ideas that he develops in other books like the Troy Rising series, Legacy of the Aldenata and in The Last Centurion.