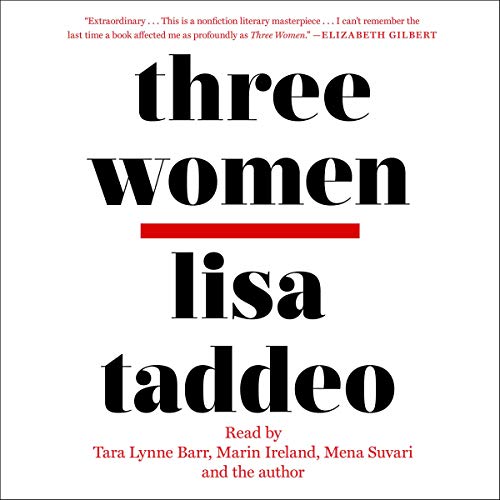 Number one Indie Next pick

Named a Best Book of the Year:

“A breathtaking and important book.... What a fine thing it is to be enthralled by another writer’s sentences. To be stunned by her intellect and heart.” (Cheryl Strayed)

“Extraordinary.... This is a nonfiction literary masterpiece.... I can't remember the last time a book affected me as profoundly as Three Women.” (Elizabeth Gilbert)

“A revolutionary look at women's desire, this feat of journalism reveals three women who are carnal, brave, and beautifully flawed.” (People, Book of the Week)

A riveting true story about the sex lives of three real American women, based on nearly a decade of reporting.

Lina, a young mother in suburban Indiana whose marriage has lost its passion, reconnects with an old flame through social media and embarks on an affair that quickly becomes all-consuming. Maggie, a 17-year-old high school student in North Dakota, allegedly engages in a relationship with her married English teacher; the ensuing criminal trial turns their quiet community upside down. Sloane, a successful restaurant owner in an exclusive enclave of the Northeast, is happily married to a man who likes to watch her have sex with other men and women.

Hailed as “a dazzling achievement” (Los Angeles Times) and “a riveting page-turner that explores desire, heartbreak, and infatuation in all its messy, complicated nuance” (The Washington Post), Lisa Taddeo’s Three Women has captivated audiences, booksellers, and critics - and topped best seller lists - worldwide. Based on eight years of immersive research, it is “an astonishing work of literary reportage” (The Atlantic) that introduces us to three unforgettable women - and one remarkable writer - whose experiences remind us that we are not alone.

This book is a nonfiction account of the lives of — surprise! — three women. It is their accounts of their struggles to find romantic love (mostly heterosexual) and how that affects the trajectory of their lives, for better and worse. It is not a story of their struggles with career, school, family, etc. It’s an interior struggle that plays out with the key men (and a few women) in their lives.

While focusing on the particular, the book becomes universal. By the end, you are left with the impression that all of us have romantic triumphs and wounds that shape who we are. Even for this male reader.

One small complaint: the arbitrary switching among the stories of the three women. I think I would have preferred to hear one story, start to finish, before moving on to the next. When the next switch came, I was left hanging on to the previous story and needed to take time to reacquaint myself with the woman’s story I was rejoining.

I am impressed with the level of immersive reporting that went into this book. It’s obvious this author spent years on this project. Well worth the effort to produce something as well done as this.

Not what it’s portrayed and not worth your time

This book is marketed as a nonfiction book that looks into lives, relationships, and desires of three women over a period of eight years.

Based on that description and raving reviews it sounds interesting right?

Well that might be the case if that’s what the book was but unfortunately it reads more like a fiction fantasy novel you find at your local drugstore. There is no in depth information unless your reading/listening to the sex scenes which the author feels the needs to go into extreme detail about. Whether this is to make the book “sexier” or what I’m not sure.

This is stories about 3 white women and their sex lives (from underage teach relations, a swinger couple, and a woman having an affair with an old boyfriend). It is boring - misleading and I couldn’t finish it.

Packaged as one thing, but it’s really another

My main problem with this book is that it’s supposed to be a study about female desire, and very early on I realized that this was just the marketing angle, and instead it’s a compilation of three women, one of which already has a story covered by the media, and two additional random stories.

There are so many things wrong with this novel but I will start here. The author claims this study took her 8 years to complete. The pool was 3 white women (who I suppose represent all of us...)and the story is about how these women engage in controversial sex w a teacher, an old lover, or by swinging w their partner.

The author not only picked 3 white women, but she also makes a terrible reference to a Cuban lover one of the women had, and talked about how her friends teased her for being with a dirty greasy spic. Just really awfully framed from a crafts perspective.

Lastly, the author demoralizes women as a whole gender by telling the story of her mothers death-bed advice “don’t let them see you happy, specially other women.” The author goes on to says she learned that lesson a long time ago.

Lisa Taddeo has single handedly regressed all the work women have done in the last 20 years to meet their sisters and help one another by writing this book. Women longing for sex and being sexual is something that is no longer a topic to raise awareness on. We burned our bras a long time ago. How is this news? This book should’ve have been written in 1945, I wonder if the author knows, or has the maturity to understand how far women have already come.

The fact that that she wrote this “sex sells” book and packaged it as a non fiction around women and female desire, is really a testament to how she views her readership. “They they will buy anything in the self help section, specially if there’s sex scenes too.”


Maybe Taddeo is right, maybe women should not trust other women, because she has sure left me feeling like I’ve been taken for a ride.

I will not only be returning this book, but outing this author.

Elizabeth Gilbert! How much did you get paid for the sponsor quote?

Great book with fair handling of a difficult subject. The themes in the three wildly different stories are expertly drawn together. Difficult to read without feeling both the thrill and pain of the three protagonists.

Don’t listen to the haters, this is a pretty good book, although quite pessimistic. It’s non-fiction written in a literary style, which, at first, irritated me because I wanted the facts, but it’s very well written so you adapt to the prose.

The author presented three unique scenarios through three women Lina, Maggie and Sloane. Even though each woman’s tale is singular, these are universal struggles. If a woman reading this can’t identify herself somewhere in each of these women, she either hasn’t done much living or hasn’t done much personal excavation.

It’s always uncomfortable to listen to stories about people who are abusing themselves. Most women are by proxy - through their husbands, or children, or mothers, or bosses. That’s the conclusion I failed to see the end of this book, or the end of any of modern feminist literature. That the victim and the victimizer are the same person.

Still, the book is on trend (very metoo). And psychologically probing. It’s worth your time.

I just couldn't do the author's lisp. Mena Suvari's narration was a relief. Stories were interesting. Provocative. The writing captured much of the complexity of human emotions. Although I would not reread or listen again, I would be interested in the author's future works.

a series of unresolved stories of regret

This book has a series of short stories about several different women's struggles with life, love, sexuality, relationship, but it fails to get to the point in a meaningful way and leaves you wondering is that all? What was the point??

As an avid reader/listener of nonfiction, I've been moved and taught by many books (Evicted and No Visible Bruises come to mind). No book has affected me like Three Women. The cliché "brutally honest" is the best explanation I can muster. I cannot wait to listen again so I can delve deeper into the lives and the intricacies of the three women (all women, all people) Mrs. Taddeo examines. Stunning.

Ooof. This. Was. Terrible.

I have so many problems with this book. I was really looking forward to after after reading a few early reviews. What those reviewers described was nothing close to what I read.

I was immediately set off from the prologue. The author reads this herself. With a pronounced lisp. - it might just be me, but listening to a lisp is like fingernails on a chalkboard.

The women. Maggie. Maggie sounds like a spoiled child. She had a crush on a teacher and was rebuffed so she decided to get back at him any way she could. He was acquitted of all charges. Her story wasn’t believable.

Lena. Her story was hard to listen to. She’s in a sexless marriage with boring, reliable Ed, who seems rather uninterested in his wife, so Lena looks up Aaron, an old high school - now married - boyfriend, on FB. They rekindle their physical relationship and this woman thinks it’s love because she finds a guy to French kiss her and after hearing it about a thousand times, we learn that french kissing is all she wants from poor old Ed. Aaron sounds like a dolt. Calls her kid, treats her like shit , has sex with her now and literally bolts as soon as they are done. There is nothing redeeming about Aaron, yet Lena thinks the sun rises and sets on his head. It’s hard to listen to just how desperate Lena is, pining for this painfully less than man, dropping anything and everything (kids included) if Aaron decides he’s got five minutes for a blow job.

Sloane. We’re supposed to believe she’s got everything. Looks, brains, a rich husband and career. Her husband fancies watching his wife have sex with other people and Sloane goes along for the ride. She initiates an encounter with an employee which turns into an ongoing affair which ultimately blows up in her face when the employees wife finds out. Yet somehow Sloane is still the victim. She’s ALWAYS the victim.
I didn’t care what happened to any of these entirely pathetic women.
This book isn’t “groundbreaking”. This isn’t a look into women’s desires. This book took EIGHT YEARS to write? Find a better way to utilize your time then, because this could have been written in quick weekend.
Three desperate, lonely women make bad choices and have sex to please men who don’t treat them with respect.
There. I’ve written this book.

Save your money. This was just awful.