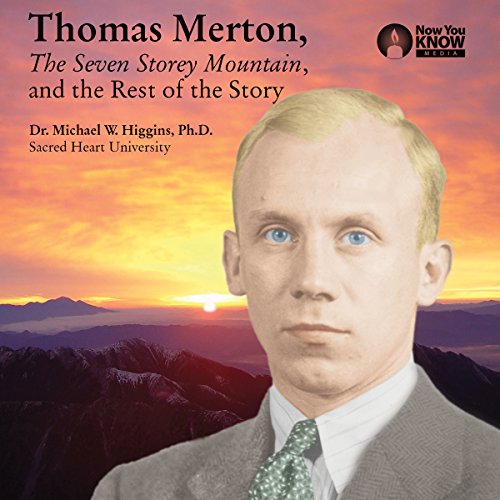 When Thomas Merton published The Seven Storey Mountain in 1948, no one could have expected it to become an international sensation. An autobiography of his conversion to Catholicism, it became a wildly popular best seller, propelling this humble Trappist monk to literary fame. Today, it is widely regarded as a spiritual classic.

While it remains his most famous work, The Seven Storey Mountain is only the tip of the iceberg in Merton's rich, multi-layered oeuvre. In Thomas Merton, The Seven Storey Mountain, and the Rest of the Story, you will join award-winning professor and speaker Michael W. Higgins in exploring Merton's compelling autobiographical literature. As you examine his journals, letters, novels, and poetry, you will encounter a brilliant portrait of the premier Catholic spiritual figure of the twentieth century.

Although The Seven Storey Mountain cemented Thomas Merton as a prominent writer, he also felt that it presented a limited portrait of him. Indeed, his later autobiographical works, such as Conjectures of a Guilty Bystander and The Asian Journal, show a more mature and fully realized vision. The Seven Storey Mountain would establish many of Merton's most powerful themes - his later works brought these themes to their apex.

In this course, you will examine the writings of this modern and post-modern chronicler of the soul's unfolding. Encounter Thomas Merton - the man, monk, and mystic - today.

Thomas Merton, The Seven Storey Mountain, and the Rest of the Storyに寄せられたリスナーの声

I didn't realize this was a lecture about Merton, instead of a reading of The Seven Story Mountain.

Not really about The Seven Storey Mountain

This is a lecture series about Thomas Merton and his life. It barely eludes to the book it purports to be about. Although there is interesting information about the man the lecturer drones on about minutiae and repeats information to the point of boredom.

Especially well done with author’s own voice. Brief but very perceptive in catching the “essence” of Merton’s life, thought and spiritual legacy.

I was hoping for something more of Merton's philosophy and theological commentary. Instead i got a dryly delivered discussion of Merton's life with none/very little of the philosophy. There may be some later but I only made it half way through.

Like many, I first encountered Thomas Merton through The Seven Storey Mountain. My new college roommate had finished a summer retreat at Gethsemani abbey, where Merton lived and wrote. As powerful as it is, I realized the Seven Story Mountain was only a small part of Merton's life story.

This new series, by Merton biographer Michael Higgins, mines the riches of Merton's many books, journal entries, poems, etc. written over a productive lifetime to paint a vivid, surprising, and spiritually edifying picture of one of the greatest spiritual masters of our times. Higgins' presentations are erudite and exciting. A great story teller with a deep understanding of his subject, Higgins makes Merton accessible. I highly recommend this series to anyone interested in understanding the broader life context for the great themes of Merton's writings. I hope that you are inspired as I was.

A must listen for Merton devotees...

Beautifully and insightfully presented, Merton's life and work are explained and illuminated. Professor Higgins himself sheds grace and clarity in his lectures.

The narrator Higgins was awful. This reading was not about the subject. It was about the narrator. I was looking for The Seven Story Mountain and got something else.

Despite Michael’s knowledge of Merton I still do not get why he is significant.
In the history of Christian spirituality he is a lightweight! Am I missing something!