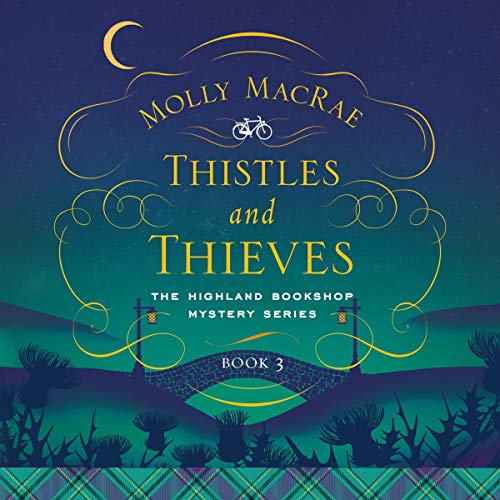 Out for a bicycle ride in the hills beyond Inversgail, Janet Marsh discovers the body of Dr. Malcolm Murray. The elderly Murray and his own bicycle went off the road and down a steep slope - he’s sprawled in the burn at the bottom, his damaged bike in a patch of thistles on the bank. Tire tracks at the side of the narrow road suggest a vehicle might have been involved. But who would want the well-loved retired doctor dead?

A few days after the death, a box of vintage first editions is left on the doorstep of Yon Bonnie Books with a note: “Please look after these books. Thank you.” Janet and her crew at the shop are at first delighted, and then mystified - what exactly does “look after” mean? Are they free to sell them? And what are the odd notes penciled in the margins?

With a little digging, the women decide the books might belong to Malcolm Murray or his reclusive brother, Gerald. When Janet and Christine call at Malcolm’s house, they find his confused, angry sister and evidence of a burglary. When they go to Gerald’s modest croft house, they find the door ajar and Gerald dead inside, stabbed with a regimental dagger. While the police try to determine if the Murray brothers’ deaths are connected and who’s responsible, Janet and the bookshop owners try to find out how and why the box of books ended up on their doorstep. The police are interested in those questions, too, and they’re more than a little suspicious. Are the Yon Bonnie women as good with burglar tools as they are with books - and at finding bodies?

because it has an interesting sounding plot and characters -- but the characters' eccentricities are so exaggerated they are inane! I couldn't listen to the whole thing. I LIKE cozies and I had every expectation of liking this one but this was . . . embarrassingly dumb.

Thistles and Thieves is a pretty good cozy mystery with engaging characters and a well written plot. I look forward to the next one in this series