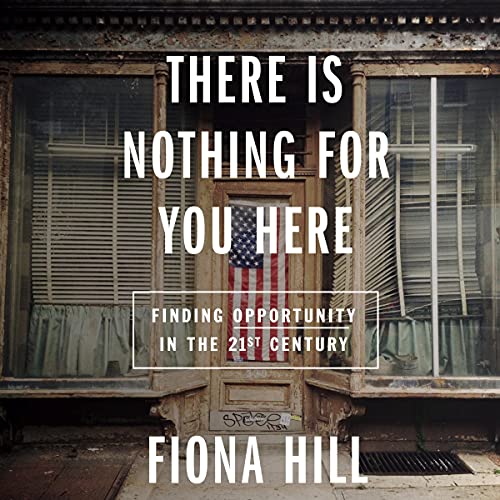 There Is Nothing For You Here

"As a memoir this is hard to put down; if you are seeking a better American future you should pick it up.” (Timothy Snyder, New York Times best-selling author of On Tyranny)

A celebrated foreign-policy expert and key impeachment witness reveals how declining opportunity has set America on the grim path of modern Russia - and draws on her personal journey out of poverty, and her unique perspectives as a historian and policy maker, to show how we can return hope to our forgotten places.

Fiona Hill grew up in a world of terminal decay. The last of the local mines had closed, businesses were shuttering, and despair was etched in the faces around her. Her father urged her to get out of their blighted corner of Northern England: “There is nothing for you here, pet,” he said.

The coal-miner’s daughter managed to go further than he ever could have dreamed. She studied in Moscow and at Harvard, became an American citizen, and served three US presidents. But in the heartlands of both Russia and the United States, she saw troubling reflections of her hometown and similar populist impulses. By the time she offered her brave testimony in the first impeachment inquiry of President Trump, Hill knew that the desperation of forgotten people was driving American politics over the brink - and that we were running out of time to save ourselves from Russia’s fate. In this powerful, deeply personal account, she shares what she has learned and shows why expanding opportunity is the only long-term hope for our democracy.

There Is Nothing For You Hereに寄せられたリスナーの声

Excellent book on populism, Putin, Trump and us

Ms. Hill's experiences are an engaging read, and her insights into the malaise threatening the stability of developed nations around the world are sharp and illuminating. I learned a lot about the forces that brought Brexit to bear and the rise of Putin. Her reading of the book is also superb. This is one of the best non-fiction books I've read in a long time. I highly recommend it! I couldn't stop listening!

I'd give this book ten stars if I could...I was blown away by Dr. Hill's thesis and the lifetime of formal and real world education into political economy in the UK, US, and Russia upon which it is based. I think every American should read this book.... as all of us can see threads of our own individual lives reflected in Hill's analysis. We had better listen and follow through with the policy recommendations, foreign and domestic, that Dr. Hill has provided.

Timely, intelligent worth the time

I enjoyed this book very much. It tells the story of how societies effect the individual. She is a brilliant person. I wish I could spend one morning a week having coffee with her just so I could hear her thoughts. This book gives hope at a time when it is needed. Thank Fiona for taking the time to write this book.

Dr. Hill shares her unique but common upbringing that shaped her work experiences in and out of government. She offers suggestions to make a difference in the direction of society from the ground up, no matter where each of us fits in the socio-economic fabric of our communities. Important and heartfelt story.

Expertly researched and written! This book is a true joy on every level. This first hand account, read by the author, is insightful and enlightening. Added to my favorites so I can listen again and again.

Audio Book Is Worth It!

When an author does an audiobook is can be better--or worse--than the text itself. This is certainly the former. Emphasis, as well as dead pan humor, really come to the fore with this recording. The author's accent, insight, and love of home come to life in a way few audio books (especially those on politics) can.

Life stories like this really come to life when spoken by "the voice", almost as if directly to the reader. Emphasis in stories, emotion, and wit; can't ask for more.

The accent that limited opportunity in their early life is no impediment in this reading. As even President Trump said, "nice accent."

A wonderful and insightful book

Fiona Hill elucidates the concept of "infrastructure of opportunity" with her own life story, brilliantly weaving together post-1980's history in the UK, Russia, and the US, into an effective explanatory framework for the rise of authoritarianism. She also includes many policy prescriptions by describing what worked in the past, along with her ideas for what might work in the future. It is a bit long-winded in parts, and I found myself upping the narration speed for some passages, but the insights are well worth it, particularly in the early chapters.

Fiona Hill is a woman of impact. I was so impressed with her during her Congressional testimony and now I am even more impressed. While she covers many topics besides herself, it all relates to her personal observations and experiences. she is a shining example of why women should run the world instead of the petty, arrogant and ignorant men who have destroyed democracy. 'Nuff said.

An in depth look at a remarkable woman

From the first five minutes, she captured my interest. Ever since her strong and honest demeanor while testifying at the impeachment trial, I wanted to know more about her and her rise under George Bush, Barack Obama and Donald Trump.

She understands the disappointment of the middle class American and their anger at the ethical ambiguity of the 21st century. Much of what is happening in America, with political unrest, has plagued other countries and she clearly defines the comparisons. Her analysis of the behavior of powerful people gives great insight.

She shows young people, struggling to make a success in their careers and in life, to make good choices. Those of us who have experienced quality of life in the past decades, find this century to be far more chaotic, dishonest and financially difficult.

I highly encourage people who want to understand the serious need to address middle class prosperity, to read her book and experience her great wisdom. Thank you, Ms. Hill.

Looking at Opportunity in the US, Russia, and UK

I repeat-listened to much of this book several times. There's so much here that people need to know. Especially interesting is the description (much of it first-hand) of how the US, UK, and Russia limit class and gender mobility and how their leaders talk a certain kind of talk.

The book traces Dr. Hill's upbringing from a coal-miner's daughter in northern England and her trajectory to a think-tank in the US - to an expert on Fox News - to a National Security Council expert on Russia in the Trump administration. She talks a lot about the Trump White House which is fascinating and very concerning - especially what kicked off the first impeachment.

There were a few things I felt were left out - for example she doesn't talk about Michael Flynn's (who she worked with) arrest and really nothing about her testimony at the impeachment - just how she felt she had to dress for it.

I feel that everyone needs to read this book.

Brilliant book, a wealth of insight

I really enjoyed this book, it’s so insightful in so many areas and there are solutions too. A great read!

This bookMay save the world

This should be required listening (must be heard in Fiona’s wonderful voice) for every legislator in the US and UK. Maybe every person…..

Very well done as always hard to address the UK and US markets simultaneously. Terminology may be different but structural issues the same. The depressing lack of political will to fix things is well highlighted. Slightly lost you towards the end but very enjoyable and chimed with my own life experiences.

A well thought through analysis of wht populism gets people into power but then fails them. At points I was wishing she'd come back to the UK and go into politics herself.

Fiona Hill’s life story is riveting. In telling it, she brilliantly and expertly sums up all that needs fixing in 21st century politics and how to fix it.

Having escaped England’s deprived North East, Fiona found herself at the centre of politics in Trump’s White House. Appalled by his populism and narcissism, she was not surprised that so many Americans supported him. This book should be compulsory reading for politicians and anyone in a position of authority.

Lots for you here

An inspirational and fascinating insight into how FIona overcame the odds to make it to the highest levels of government. I was attracted to the book by her Russia work but the portrayal of links between society’s was really interesting.

I really enjoyed this except the last few chapters which felt a bit like she needed to pad the book out.