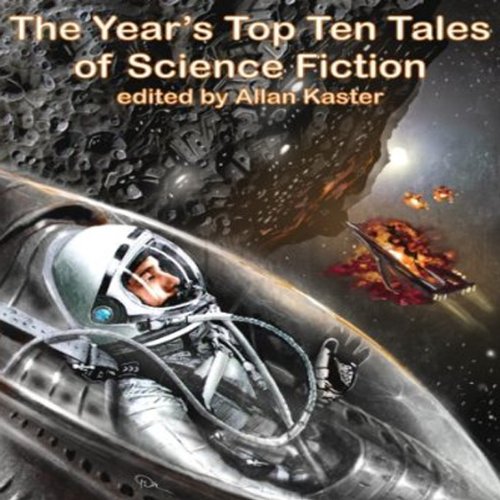 This is an unabridged audio collection of the "best of the best" science-fiction prose, originally written in 2008 by current and emerging masters of the genre and as narrated by top voice talents.

"Exhalation", by Ted Chiang, tells the story of a world totally unlike Earth where mechanical men use the gas argon as air, replacing their lung tanks daily from an underground well. "Exhalation" won both the 2009 British Science Fiction Association Award for best story and the 2009 Locus Award for the best short story.
"The Ray-Gun: A Love Story", by James Alan Gardner, tells the story of a boy who discovers a ray-gun that affects his life in unanticipated ways, both good and bad. This story won the 2009 Theodore Sturgeon Memorial Award.
In Stephen Baxter's "Turing's Apples" two brothers reluctantly work together to decode an alien signal picked up by a radio telescope on the far side of the moon.
In a homage to H. P. Lovecraft, a black naturalist, just before World War II, investigates the biology of shoggoths (blobs of jelly) on the New England coast in Elizabeth Bear's "Shoggoths in Bloom".
A scientist slowly goes mad trying to prove that the distant stars are made of diamond and that matter is just light slowed down in Jeffrey Ford's "The Dream of Reason".
A steel company will do what it takes to prevent two scientists from releasing the secret of making carbon nanotubes in "The Art of Alchemy" by Ted Kosmatka.
In Paul McAuley's "The City of the Dead", the town constable in a settlement on a planet in the Sagittarius arm of the Milky Way befriends a woman who researches dangerous hive rats.
And a genetically enhanced psychopathic secret agent battles the "Rebirths" for the survival of the human race in Robert Reed's "Five Thrillers".

Robert Reed is an absolute legend. Simple as that. Audible needs more of his works.

What disappointed you about The Year's Top Ten Tales of Science Fiction?

The stories were boring and simplistic. Were these the top 10 sci-fi tales for 1951? I did read the tittle several times and these were supposed to be the top sci-fi stories for a year after 2000.

What could Stephen Baxter have done to make this a more enjoyable book for you?

get some bettter stories. do not deceive readers making them think they will read entertaining science fiction

I really enjoyed the bulk of these stories. They are entertaining, interesting and on the whole of high quality. I particularly enjoyed 'Ray-Gun - A Love Story', which you could envisage would make a rather good film.

However, as a Brit, the readers rather pained delivery and dead pan American drawl really started to grate after a while. Luckily, there are a few other readers along the way, which aren't advertised on the listing, but they help to break up the narrative.

If you want a really good laugh, listen out for Tom Dheere's British accent, which pops up in a couple of places and seems to have been dirived from watching dodgy episodes of Eastenders.

However, its worth persevering with this - there really are some excellent works in here if you like your hardish Sci-Fi.

These are great mainstream SF short stories that echo the golden age. However the narration is very poor, comprising a characterless flat monotone with little variation in tempo and emphasis. The only relief is in the Stephen Baxter stories when, inexplicably, the narrator attempts a 'British' accent and gets it terribly, hilariously wrong, drifting between cockney, irish, north country! What a pity these excellent tales are ruined in the telling.