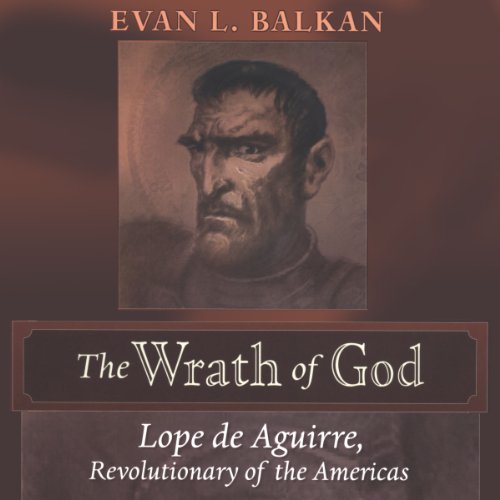 In 1560, General Pedro de Ursua led an expedition through the Amazon in search of El Dorado. Three months later, Ursua was murdered. His replacement, Fernando de Guzman, was also murdered. Emerging from the chaos was the Biscayan Lope de Aguirre, who turned away from El Dorado and led his men to Peru to overthrow the royal forces and declare independence from the Spanish Crown. When Aguirre was finally killed, the aftermath was astonishing: hundreds dead, entire towns depopulated, and a nascent revolution quashed.

Deliberately provocative, Evan Balkan's The Wrath of God examines Aguirre, a symbol of Basque fury and rampage, arguing that Aguirre's historical representation as a one-dimensional madman deserves revisiting. Indeed, Aguirre may be the Americas' first true revolutionary, a view shared by Simon Bolivar, among others. 2011 marks the 450th anniversary of one of the most extraordinary and least known events in the history of the Americas, and Balkan's work offers a timely investigation into the revolutionary's life and controversial methods.

I found myself checking to see if I had inadvertantly turned up the speed on the app. It was like the narrator was rushing to get to an important meeting. The diificulty in pronouncing names and places I can understand, but the speed reading rendered this book useless. I would ask for a refund, but I am not that guy.

Book is good, guy reading it is not.

Book is good, guy reading it is not. Many of the words and names are in Spanish and he has no idea how to pronounce them, making it difficult to follow the story.