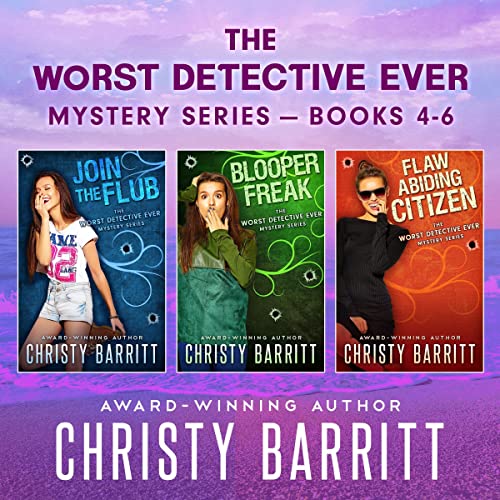 Have you met Joey Darling yet? Books 4-6 in her Worst Detective Ever series are now bundled for your convenience!

There’s no business like show business...especially when a killer is involved.

Joey Darling’s local movie premiere was supposed to be a win-win for everyone involved. All the proceeds would go to the children’s wing at a local hospital, and the online buzz would create positive press for the area’s tourism. But things go awry when the event is sabotaged and Joey’s stunt double is seriously injured.

Suspects seem sparser than quality G-rated movies, and police fear the intended target was actually Joey. Detective Jackson Sullivan and neighbor Zane Oakley—two men competing for Joey’s affection—insist on trading off guard duty until the bad guy is behind bars. To make matters even worse, Joey’s ex shows up right before the release of his tell-all book about his life with the Hollywood sweetheart.

Someone seems determined to create real-life drama. But Joey isn’t one to be deterred. Though a movie-worthy villain wants to pull the plug on this production—and maybe even on a few people’s lives—Joey is determined that the show must go on.

Joey Darling, actress and detective by default, is reminded of this point daily. If only problems could be solved in 60 minutes, complete with commercial breaks, closing credits, and a catchy theme song.

Joey accompanies Detective Jackson Sullivan to a crime scene, only to discover she knows the victim. After a friend is accused of murder, Joey can’t refuse her help—however bumbling it might be. Unfortunately, she only seems to dig up more questions instead of desperately needed answers.

When a misguided fan offers clues, Joey discovers something much deeper than a single crime. But can she sort through all the various story lines to get to the truth? Or will one blooper after another put not only the investigation in jeopardy, but her life as well?

Where’s the director when you need him to call “cut”?

Just when Joey thinks she’s closer to answers about her father’s mysterious disappearance, more questions surface. The starlet is determined to find her dad and to put an end to the crazy stalker fan club trying to manipulate her decisions. But life has plot twists she can’t see coming.

Secrets abound—secrets from the most unlikely of people—and Joey’s had enough. She’s tired of flawed theories and abiding by other people’s rules. Doing what any good citizen would, she seeks resolution, knowing the stakes are higher than just herself.

Dangerous encounters meet the wannabe detective at every turn. As the end of one mystery draws close, it’s clear that Joey will either end up with the answers she seeks or find herself in the closing credits...for one final time.