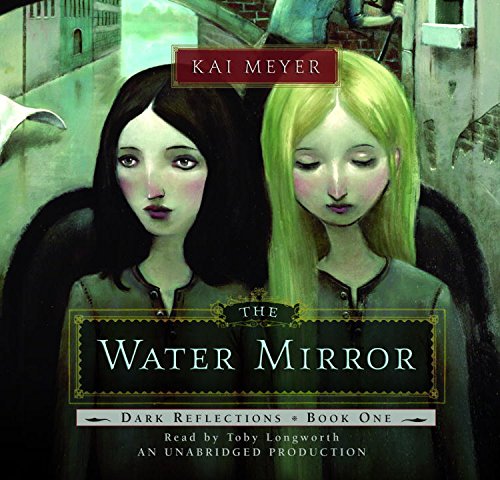 In Venice, magic is not unusual. Merle is apprenticed to a magic mirror maker, and Serafin, a boy who was once a master thief, works for a weaver of magic cloth. Merle and Serafin are used to the mermaids who live in the canals of the city, beautiful creatures with hideous mouths that split their faces from ear to ear, and to the guards who patrol the streets on living stone lions. Merle herself possesses something magical: a mirror whose surface is water. She can reach her whole arm into it and never get wet.

Now, Venice is under siege by the Egyptian Empire; its terrifying mummy warriors and flying sunbarks are waiting to strike. All that protects the Venetians is the Flowing Queen. Nobody knows who or what she is, only that her power flows through the canals and keeps the Egyptians at bay.

When Merle and Serafin overhear a plot to capture the Flowing Queen, they are catapulted into desperate danger. They must do everything they can to rescue the Queen and save the city, even if it means getting help from the Ancient Traitor himself.

Kai Meyer's bold, original fantasy conjures up a land of magic and menace as Merle and Serafin begin a journey to unimagined realms in the extraordinary world of Dark Reflections.

I thought this book was wonderfully dark and creepy with the perfect amount of suspence. Merle and Juniper are great characters,fully developed.

This was a pleasant surprise. I enjoyed the magic of Venice. Merle is a brave girl who gets caught up in a magical adventure. Well worth the time to listen.

I really enjoyed this story. There are three to it however, only two are available by Audible 'The Stone Light' is the second book. If I were you, I'd send requests for them to bring the last story to Audible to complete this trilogy. If not, I'll have to just read the last book 'The Glass Word'.

A fantastically imaginative tale that does not shy from its darker side. Very well done.

I have enjoyed the narration of Toby Longworth in the past, and this audiobook, for the most part, is no exception. His timing and depth are quite good.

What I did have a problem with was the abrupt and sudden end. The entire work seems like a long setup for a future novel. If you are looking for plot and conflict and resolution, you will be disappointed.

The work hints at future plot devices which could go horribly wrong or wonderfully right. Without finishing the series it is impossible to say whether this book is a complete waste of time or the beginning of something good-- and audible.com currently only offers the first two books.

Given my lack of fulfillment in the resolution of the Lemony Snicket books, I am more inclined to warn than recommend.

Good luck with your own decision!