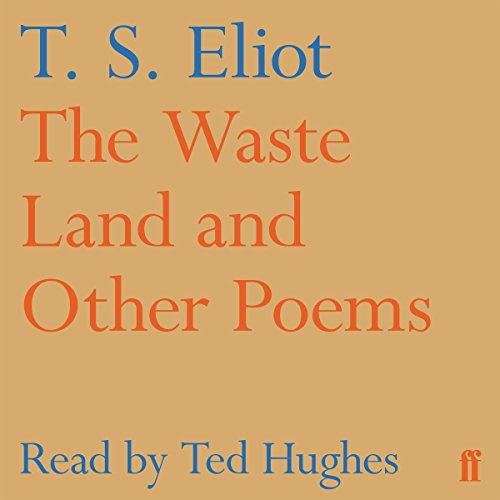 "Each year Eliot's presence reasserts itself at a deeper level, to an audience that is surprised to find itself more chastened, more astonished, more humble." (Ted Hughes)
"'The Waste Land' is one of the most important poems of the 20th century." (Andrew Motion, Independent)
"Eliot's 'Waste Land' is I think the justification of the 'movement', of our modern experiment, since 1900." (Ezra Pound, letter to Felix E. Schelling)
"'The Waste Land' is unquestionably important, unquestionably brilliant.... One of the most moving and original poems of our time." (Conrad Aiken, New Republic)
"'The Waste Land' is Mr Eliot's greatest achievement." (E. M. Forster)
"'The Waste Land' remains a great positive achievement, and one of the first importance for English poetry. In it a mind fully alive in the age compels a poetic triumph." (F. R. Leavis)
"A damn good poem...about enough, Eliot's poem, to make the rest of us shut up shop." (Ezra Pound)

'The Waste Land' is a landmark in 20th-century poetry. Here it is read by the late Poet Laureate Ted Hughes.

Published in 1922, it is a brilliant exploration of a faithless, immoral society trying to rebuild itself after the devastation of the Great War. Rich in literary references and steeped in allusive and evocative imagery, 'The Waste Land' is widely considered to be the pinnacle of modernist poetry. This audiobook also contains some of Eliot's other poems, including 'The Love Song of J. Alfred Prufrock', 'Sweeney Among the Nightingales', 'Ash Wednesday' and 'Journey of the Magi'.

Ted Hughes (1930-1998) was born in Yorkshire. His first book, The Hawk in the Rain, was published by Faber and Faber and was followed by many volumes of poetry and prose for adults and children, including River (1983). He received the Whitbread Book of the Year for both Tales from Ovid (1997) and Birthday Letters (1998). He was Poet Laureate from 1984, and in 1998 he was appointed to the Order of Merit.

The Waste Land and Other Poemsに寄せられたリスナーの声

It's something wonderful when a poet finds a voice and a character that resonates over such a long period of time, Prufrock is one such. Even now nearly a century later he is almost speaking for me and my view of the world. Still a beautiful poem and followed up with The Waste Land which I'm still trying to unravel.

Eliot needs to be read aloud rather than laboured over on the page. Hughes understands the music .