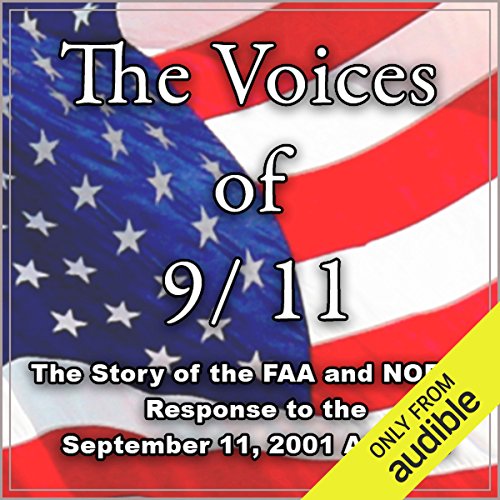 "The story of the day, of 9/11 itself, is best told in the voices of 9/11," said Miles Kara, a retired Army colonel and an investigator for the September 11 Commission, in a recent New York Times report.

Included here is a selection of recordings of Federal Aviation Administration, Defense Department, and American Airlines communications from September 11, 2001. You will hear air traffic controllers, military aviation officers, airline and fighter jet pilots, as well as two of the hijackers, during two hours of that historic morning.

Transcripts and some of the recordings have been released previously, but not the complete "audio monograph", as it was described by the September 11 Commission. The recordings were originally intended to be part of the Commissions' 2004 report on the terrorist attacks, but were not ready in time for a legal review before the Commission finished its work. They have now been released in their entirety.

This is Real World, Not Exercise

I'd just listened to a heavy work, over 24 hours, and wanted something short and engaging. When I found this, I figured it would do well for my mood.
What I got was a punch in the gut.
Looking back, I went in god-awfully glib: This is short! This is, even better, free! This is perfect!
It was a descent into the madness and memories of that horrific day and the days that followed. I was suddenly transported back to days of weeping and stuffing Oreos into my mouth, all in an attempt to release the terrible grief and fear of all that I (and most of the country) was feeling.
The tapes start with people simply living their lives, going through their day, with a blip or two occurring on the radars of their awareness. It grows into a gnawing fear and dread. We get to experience things just as they do, hearing oddities from cockpits, trying to understand, then trying to take actions to control what they soon start figuring out is a completely out of control situation. The line, "Does anybody know why there's smoke in lower Manhattan?" about killed me. Follow up with, in trying to get a bead on lost planes, someone saying, "Look out the window. Do you see it flying low?" and then "Yeah, it just dropped like 800 feet!" with the second plane going into the WTC, and I was flat-out sick.
There is some misinformation that the controllers deal with; there is audio from NORAD and the "This is real world, not exercise!"; there is horror, dread, and some extraordinarily calm people doing the impossible.
There were plenty of times that I wanted to shout at them to just get the planes out of the air, but who knew then what we know now? The fact that decisions were made so quickly and with such finality is mind-blowing, especially when so many different towers were involved. And though the last four minutes of the recording are tinny and difficult to understand, they're worth listening to. They pretty much sum up everything that became part of our American culture.
It's strange. I work with teen-aged girls who were only toddlers when 9-11 happened. These tapes would mean nothing to them. But for anybody who watched their television sets in a trance-like horror on that day, I strongly suggest the quick listen. Warning, though: if you felt even an iota of anything that remotely suggests your humanity back then, you will most likely, even now at this late date, feel something pretty powerful.
Personally, I'm going to sit and stare at the wall for a while, wipe some tears away...

I find it hard to read this book. I'm a very big history buff. But I have lived through this event. unlike the Challenger disaster I remember what happened that morning after dropping my kids off to school. I happen to work for a newspaper at the time and was getting ready to go to the warehouse where we pick them up.

that day was one of the longest I remember standing there in my girlfriend's living room watching the news seeing the second plane hit and wondering what was going on worried about my children that I just dropped off to school and wondering if it was safe to drive and go out at all. I'd lived in Michigan near Selfridge Air Force Base which was one of the places where the military was scrambled from and we heard the Jets go off and we didn't know what was going on.

This Book brought those voices to life filled in some blanks that I didn't know that happened it's not something I think that I can listen to again but how to read it as a history its spot on but it's so heartbreaking to know what happened and all those who lost their lives.

Would benefit from an overall context narration.

Fascinating but sometimes obscure. I thought that small snippets of narration to provide context would have helped. At times very moving, always frustrating in the reminder of a futile act the caused so much grief.

Chilling , the words at the end tell it all.

It's is a new kind of warfare. They have to be right only once ...

If you could sum up The Voices of 9-11 in three words, what would they be?

What was one of the most memorable moments of The Voices of 9-11?

The rule of engagement segment near the ending authorizing the shooting down of unresponsive plans along with the heroism of United Flight 93 to retake control.

Have you listened to any of the narrator’s other performances before? How does this one compare?

All of it moves all of us.

This is a great Audio to have free, my first experience with Audio book and I like it

The Scariest recording I have ever listened to

Sobering, intense, terrifying. VERY hard to listen to, but something that puts a human face on the events of 9/11 in a way that books, newspapers, magazines, movies or television cannot.

It added to my appreciation for the heroes and martyrs of that day. No matter how uncomfortable you feel while listening to this, it is but a drop in the ocean compared to how the participants and their families must feel.

Really puts you in the middle of the event.

What would have made The Voices of 9-11 better?

What could Various have done to make this a more enjoyable book for you?

I suppose being from USA making this recording more valuable

Difficult to listen to especially if you aren't familiar with air traffic control lingo. If you are, it is riveting and fascinating to hear how these professionals work through the situation trying to understand what is happening and how to respond to it.

Excellently produced, very sad events presented in a very matter of fact way that helps you to appreciate the magnitude of 9-11 and its aftermath

Well put together and interesting to hear the experience from the aviation support side. However I thought the ending was too abrupt. It missed eaving a epilogue to finish.

Goosebumps from start to finish. The story you dont know about the innocent peope of that fateful day.

Such a sad day. Interesting to hear about it first-hand and people's initial reactions. Some of the the sound isn't very clear but that's to be expected from radio comm chat. Good book 👍

a lot of knowledge was gained from listening to this I understand the great confusion.
desperately trying to come to terms with this dreadful day.
the Air traffic control did a wounderful job considering the exception circumstance

This was a fascinating insight into the tragic events of 9-11. An eye-opening experience of what the ATC staff were doing to try and figure out what was happening.

Hearing the actual recordings from air traffic control and from the flights themselves, makes this a most interesting and harrowing audio book.
Sounds strange to say, yet this is an excellent insight to the events.

deeply moving listen....terrifying to hear the events unfold............
I feel for the men and women dealing with these events. I doubt life was ever the same for them again.