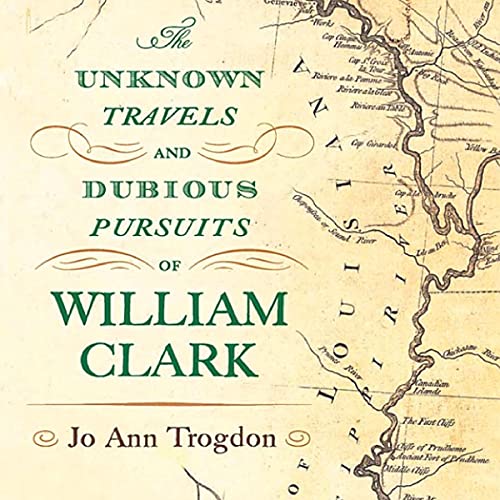 The Unknown Travels and Dubious Pursuits of William Clark

In 1798 - more than five years before he led the epic western journey that would make him and Meriwether Lewis national heroes - William Clark set off by flatboat from his Louisville, Kentucky, home with a cargo of tobacco and furs to sell downriver in Spanish New Orleans. He also carried with him a leather-trimmed journal to record his travels and notes on his activities.

In this vivid history, Jo Ann Trogdon reveals William Clark’s highly questionable activities during the years before his famous journey west of the Mississippi. Delving into the details of Clark’s diary and ledger entries, Trogdon investigates evidence linking Clark to a series of plots - often called the Spanish Conspiracy - in which corrupt officials sought to line their pockets with Spanish money and to separate Kentucky from the United States.

The Unknown Travels and Dubious Pursuits of William Clark gives listeners a more complex portrait of the American icon than has been previously written.

“At times reading like a complex spy novel, this is an excellent book.” (The NYMAS Review)

“A serious reference for any scholar of American history.” (Foreword)

“For anyone who loves historical detection, this is truly a stellar read and a worthy addition to the bookshelf for continued reference.” (Historia Obscura)

The Unknown Travels and Dubious Pursuits of William Clarkに寄せられたリスナーの声