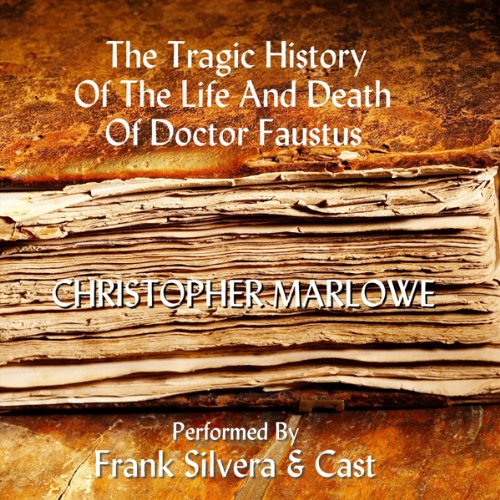 The Tragic History of the Life and Death of Dr. Faustus

Christopher Marlow's play based on the Faust story of a man selling his soul to the devil, has fascinated and divided critics throughout the ages since its first performance in Elizabethan England. The central character's thirst for knowledge and power throws up essential questions of morality, life and death.

Compulsive listening as this exceptionally brilliant play of verse and prose is finely executed by Frank Silvera and cast.

Please note: This is the original, shorter version of the play.

Great value on a rare recording

Don't be fooled: this recording is not complete, however much it may be unabridged from an earlier recording. Amongst other things, everything dealing with Cornelius and Valdes is cut, as is the Horse-courser episode. Oddly, Faustus's long and, to a modern audience, incomprehensible Latin incantation, is retained. As a result of the cuts, Faustus is neither shown needing help to master magic, nor wasting his powers on stupid tricks. In fairness to Audible, this recording seems merely to follow the cuts made in the original recording, for cassette tape, I believe. Moreover, the text of Marlowe's Doctor Faustus is famously complex. This particular version seems to follow the B-text, but cuts all of the comic episodes unique to it.

The source is evident in a distinct background hum, though the actors are very precise, in the manner of an older generation of classical actors, so their voices remain easy to understand. I particularly appreciated Mephistopheles's irony. Faustus's misplaced confidence and mounting desperation recalls Richard Burton's film version.

On the other hand, I think a lot is lost by reducing the parade of deadly sins to an audio format, especially when Faustus clearly says that he wants to see them, and the interruption of the Pope's dinner is also hard to follow in an audio format.

Nevertheless, I'm grateful to Audible for making this recording available, and hope they track down more Elizabethan and Jacobean drama other than Shakespeare. The price is extraordinary, and the recording is a very good value.

I guess a bit of Marlowe is better than none

Judging from the surface noise it sounds like this recording was taken from an old LP from the 1950s. The heavy abridgement is probably due to the time-constraints of a vinyl disc. The style of acting and the in-studio sound effects will almost certainly strike modern listeners as somewhat old-fashioned, but this remains a wonderful play, even if what is presented here is only a fragment of the complete text.

It's a stunning play, it truly is - and this is a great performance of it. But when a recording says 'unabridged', I'd love if that were true.