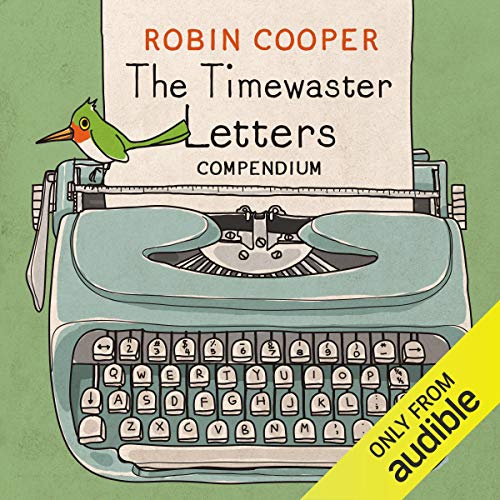 Two ridiculously funny cult classics. Brought to you - together in audio - for the very first time.

The massive best-selling Timewaster Letters books featured the wonderfully silly letters of Robin Cooper (a.k.a. Friday Night Dinner creator Robert Popper) in which he shared his madcap ideas - and even madcapper inventions - with everyone from the British Halibut Association to the Peanut Council. The resulting replies, as well as Cooper’s replies-to-these-replies, had a nation in hysterics.

Letter-writing was never the same again....

And now, exactly 15 years, 5 months and 26 days after the first Timewaster Letters book hit our shelves, you can listen to these hilarious letters, as they’re brought to life in this Audible exclusive by comedy giants Dawn French, Peter Serafinowicz and Robert Popper.

The Timewaster Letters Compendium brings together The Timewaster Letters and Return of the Timewaster Letters along with exclusive audio content. There’s a new Introduction by Popper, a chat with Serafinowicz reflecting on the 20 years since Popper sent off his first fateful letter. Plus, a world exclusive - The Cement Murder Mystery, the first thriller story penned by Robin Cooper himself and read by Jonathan Keeble. We don’t want to make promises, but it might also be the worst-written story of all time.

You’ll also get to hear a selection of Popper’s world-famous prank phone calls, in which he poses as the hapless and hopeless Robin Cooper.

Robert Popper is a writer, producer and performer, best known for creating the Channel 4 smash hit comedy Friday Night Dinner, as well as the award-winning spoof BBC2 science show Look Around You. He has also worked on many of Britain’s top comedy shows including Peep Show, The Inbetweeners, The IT Crowd and Stath Lets Flats, as well as writing on South Park.

I don't know who thought a voice actor holding his nose and speaking with a high pitched lisp for an entire audiobook would be funny, but it's just insultingly bad. how dare they do this

Wasting the time of scammers by engaging them in lengthy correspondence can be amusing. But this is a collection of decades old letters sent to innocent and unsuspecting companies for no other reason than to waste their time. Lost interest early on. Don't waste your credits.

An absolute comedy classic from one of the funniest men on the planet with a perfect supporting cast of fellow comedy legends. Anyone who doesn't find this incredibly and consistently funny is missing part of their soul. This audiobook is the ideal antidote to lockdown blues - a must for anyone with a silly sense of humour and appreciation for surreal, innovative comedy,

It really cheered me up. Very funny indeed.

This is a very silly and funny audiobook. I knew about the time waster letters before..but in audio form, the world of Robin Cooper, comes alive.
It really cheered me up, made me laugh a lot and showed a beautifully eccentric and also kind side of human nature…but basically its very very silly

As a hard working self employed person who regularly replies to emails and enquiries on a Saturday night this book is absolutely infuriating!!
The writer wasted the time of kind people who were trying to make a living and he did it while he was at work!!! Being paid to do a job not waste other people’s time.
Awful.
Infuriating.
Not at all funny.
Hated it.

An Excellent & Very Funny Waste Of My Time

Thank you for a very entertaining book Mr Cooper & please send my regards to your wife. I hope her ankle is on the mend.
Regards
Mark

Gave up listening early on

This could have been great but the constant use of the phrase "thank you for reply to my letter dated..." over and over did my head in. Peter Serafinowicz's voice and performance is sublime, as is Dawn French. But unfortunately I just couldn't listen to Robert Popper's character for too long so I had to give up.

Wasted my time listening to this dross.
Annoying voice, juvenile concept. All it proved was that most companies are decent and respectful and you are an annoying idiot.