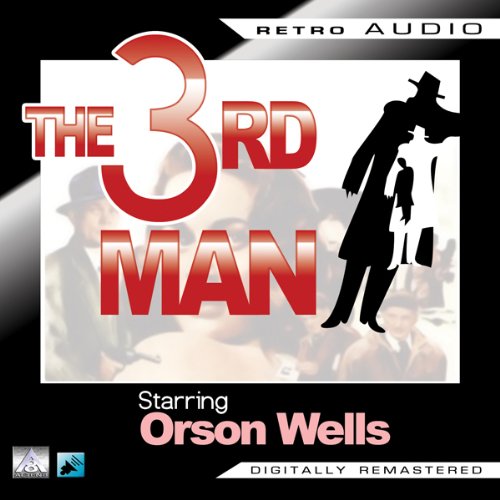 Arriving in post World War 2 Vienna, an American pulp writer finds his friend who was meant to be waiting for him has been killed under mysterious circumstances. Follow this mystery, starring Joseph Cotten, which trails through the murky world of the black market, with the involvement of the international police and the writer's Czechoslovakian girlfriend.

This is one of the Classic Radio Theatre productions you will want to listen to over and over again!

This is the radio version of the classic story, with a cast, some sound effects, etc.. It's an old-time radio version, with old-time commercial spots. It is very good as it is, and has the genuine feel of the period, but readers looking for an original print or literary version of the story should look elsewhere.

Great performance but did we really need the soap?

I enjoyed the actual performance...I’m just not sure about to need for the excessive mention of Lux soap... On the one hand it gave an insight into the role products played in radio broadcasting and how they were advertised. But was it really necessary in this recording? Could it not have been edited out?

Where does The Third Man rank among all the audiobooks you’ve listened to so far?

Too old for me but still a good performance. These old time performances rate in my top 20. I think it is important to appreciate where it all started and I like to keep them for posterity after all, these were the cream of Hollywood in their era.

If you’ve listened to books by Graham Greene before, how does this one compare?

This radio version is so edited it is nothing near the laborious film thank heavens. The over bearing heavy film put me off the 3rd Man for life. Enjoyed this but I have enjoyed other Graham Greene works much more though he is not one of my favourite authors.

Yes the type of Hollywood narration is perfect for the pace of the story. It is the same actor Joseph Cotten who narrated and starred in both the film and the radio version. His style of vocal "dark drifter Hollywood", is just right and carries the storyline along as I feel it should be.

Nothing in this book can move me other than not to listen to another line of this type.

I am glad to have been given the oppertunity to listen to this edited light version of the 3rd Man. I think all the old time Hollywood films should be available on audio.