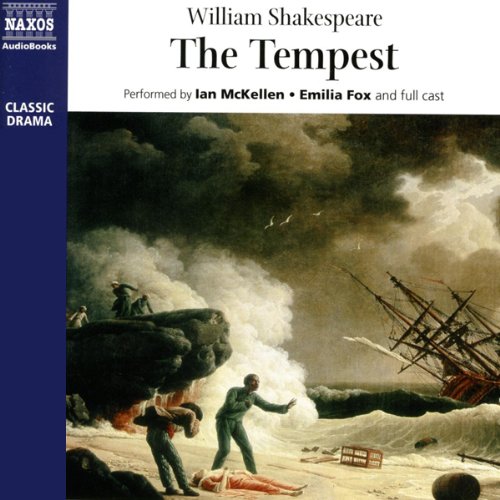 Sir Ian McKellen, fresh from his performance as Gandalf in Lord of the Rings, is Prospero, and heads a strong cast in Shakespeare’s last great play. The wronged duke raises a tempest to shipwreck his old opponents on his island so that he can ensure justice is done. With Emilia Fox as Miranda, Scott Handy in the pivotal role of the sprite Ariel, and Ben Owukwe as Caliban, this new production, directed by John Tydeman, balances the magic and the earthiness, with music playing a key role.

A stellar performance by a stunning cast

If you enjoy Shakespeare's comedies you should not miss out on this edition of The Tempest. Sir Ian McKellen as Prospero is everything you might hope for and more, which is no surprise from an actor of his caliber. The remainder of the cast excels similarly and the recording is produced seamlessly. This audio performance is a real treat.

I've always had trouble following Shakespeare plays in text. It's difficult for me to identify the tone of the scene, and the story becomes hard to follow.

Listening to these voice actors solves that problem. It's easy to follow the story when the lines are being delivered with the correct emotion.

That being said, The Tempest is a bit romantic for me, but I enjoyed it nonetheless.
Ian McKellen could literally read a dictionary to me and I would like it.

Last of the &quot;top-shelf&quot; Shakespeare

Me, poor man, my library
Was dukedom large enough.
- William Shakespeare, The Tempest

The last of the &quot;top-shelf&quot; Shakespeare plays. Those written after are either only partially written by Shakespeare or phoned-in. This one is just a trip and is a director's dream. There is so much room for interpretation and ability to get funky. This year, as I started reading Shakespeare, I saw a high school perform the Tempest and loved it. It was a HS performance for sure, but it translates well to a whole variety of people and ages. For me, the Tempest is next to A Midsummer Night's Dream in tone and style. While I'm usually not a fan of music and Shakespeare, this is one of those plays with its supernatural qualities, where music seems not only appropriate, but essential.

- Let us not burthen our remembrance with
A heaviness that's gone. (Act 5, Scene 1)

- I'll break my staff, bury it certain fathoms in the earth, and deeper than did ever plummet sound, I'll drown my book! (Act 5, Scene 1).

- This thing of darkness I Acknowledge mine. (Act 5, Scene 1)

Would you listen to The Tempest again? Why?

Absolutely! It's a fairly entertaining story.

What was one of the most memorable moments of The Tempest?

No narrator. This is recorded as a stage play. You get a different actor for every part.

No extreme reaction. Of course I was already familiar with the story.

Be prepared to rewind every now and then to catch what was said when the actors whisper. Having a hard copy of the play would probably help. Of course, then you could just read it.

This is a perfectly decent recording of The Tempest. Sir Ian is an excellent Prospero and the rest of the cast are competent, although the Caliban is a bit awkward, The sound quality is a little murky sometimes.

What did you love best about The Tempest?

The quality of the language and dialogue. I can listen to it over and over again and learn something new.

Caliban was my favorite. He represented peoples of color who lost their lands from colonization. As a character, he was ahead of his time.

Which character – as performed by the narrators – was your favorite?

Again Caliban. I can imagine myself as him. He is a lot smarter than he sounds and has a wicked sense of humor as well as a keen sense of anger, that he was dispossessed of his heritage and land.

i highly recommend this fine play.

A wonderful performance of "The Tempest". I particularly enjoyed Ian McKellen and Emilia Fox as Prospero and Miranda.

I believe this is a recording of an actual performance and that is the cause of my one complaint. There are very few or no clues to distinguish between Sebastian and Antonio. To my ear, their voices are close enough that it's a bit difficult sometimes to separate the two. (In the actual performance this wouldn't have been an issue.) Since I'm familiar with the play, it didn't bother me too much, but it did throw me a bit at first.

I would recommend this to anyone who is interested in "The Tempest".

One of my favorite Shakespeare plays. The performance was well done and very enjoyable to listen to.

The characters in this play are so interesting and the performance by this cast is top tier.

Of course, the standout is the irreplaceable Sir Ian McKellen as Prospero. He has the power to raise the score of any story.

This is one of my favorites and hearing it thusly read a true treat. The casting brought the characters and story to light beautifully.

Yes. Ian McKellen gives an excellent performance as Prospero and the recording really brings the play to life.

What was one of the most memorable moments of The Tempest?

Ariel's music and also the way in which characters were brought to life through their own mannerisms and personalities.

Prospero is the central character and gives an unforgettable performance.

Yes - I easily could have.

Hard to listen to.

The Tempest is hard to follow at the best of times but there are a few things in this production that really don't help. The first is Ian McKellen. Much of this performance of Prospero is practically whispered by the great actor. It is simply hard to hear his lines a lot of the time, unless you are listening to this in headphones - I was listening in the car and even with the volume right up he was incomprehensible at times. The second problem is the music; the musical settings of the songs are awful and obfuscate the text; they are like a lead weight around the ankles of these lyrics and utterly, utterly tuneless. It is hard to believe they were deemed acceptable.

The Tempest was an assigned reading for my studies. I was kind of forced to read it but I ended up falling in love with the book. Performances are obviously superb but the story itself has so much meaning, so many interpretations; it is a gold mine. Plus I would recommend watching a film with Helen Mirren as Prospero/Prospera - mind blowing.

This was beautifully performed and thoroughly enjoyed.

The cast was superb and really brought the tale to life.

The cast is outstanding, although Ian McKellan can be hard to hear if there's any background noise while you're listening. However, I can't give 5* because the singing/music is utterly dreadful. It's so bad that I nearly gave 3* overall!

I wish there was a full cast list available. I'm 95% sure Ferdinand is played by Benedict Cumberbatch, but his name isn't listed.

A beautiful performance of masterpiece

This is a lovely performance of Shakespeare's late masterpiece with outstanding actors. The music can be a little irritating but that's a minor complaint.

It was as if I was watching the performance.
All voices prefecture matched the character.
A wonderful audio that Shakespeare himself would be proud of.

Shakespeare and McKellen - a Perfect Combination

I enjoyed this immensely, particularly the wonderful tones of Sir Ian McKellen as Prospero. I know and enjoy the play and was pleased to hear it again after some years. I followed the text on my phone as I listened, which added to the experience. This is a great way to encounter or revisit Shakespeare... if the narration is prime quality, as it was in this instance from all speakers.