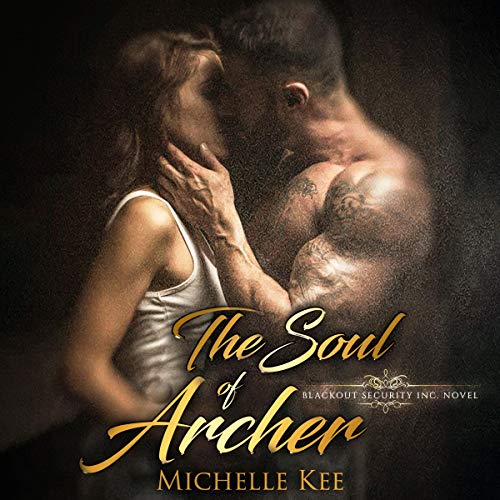 The Soul of Archer

She's running scared and running for her life....

Alora St. James thought she was living the American Dream spending her days making and designing sweet confections, running her own bakery and one night it all changes. Now she's living in a nightmare.

After being in a relationship with Sam Malconi for nearly two years, she finds out just what kind of man he is. Alora flees Austin but returns after being put in contact with Blackout Security Inc. Now back, she tries to pull herself together with Blackout's help. What she never expected was Lance "Hawkeye" Archer.

Lance had sworn off relationships. Or so he thought. Alora came to Blackout for help after witnessing her ex's true nature. There's something about the dark haired, amber eyed baker that sneaks in and sucker punches him. Yes, he's intrigued but he doesn't want this.

However when Sam Malconi starts targeting Alora, Lance is having none of that. He vows to protect her from Malconi, yet he also knows he's risking his very heart by doing it, but he can't afford not to.

As the heat builds around Alora, the fire between her and Lance grows into a passion filled inferno neither wants to extinguish. Can Lance and Blackout keep her safe from the Malconi family or will she become yet another victim?

I asked to receive this free review Audible book and wrote this unbiased review. This is the first book I have listened to by the author and I wasn't disappointed. Alora is a strong independent woman who isn't afraid to defend herself. But she is also smart enough to know when she needs help. Lance Archer is a fierce protector and soon to give in to the woman that he comes to love even though he vowed to never fall for a woman again. This book contains suspense, angst, intrigue, great friends and family, lots of action, and passionate love. Alora witnesses her boyfriend commit a murder and seeks help from the Blackout Security Agency. Lance becomes her main protector. I don't know about other listeners but every time Alora was out I just knew that the Marconi family was going to abduct her. Needless to say I was on the edge of my seat a lot.

I wasn't a fan of the narrator's female voice for Alora but I did get used to it. That being said, I did love his male voices. He gave Lance a very sexy voice. He gave the other characters distinctive voices and this brought them to life. He also did an amazing job of portraying the emotions and personalities of these characters. I would listen to him again. I highly recommend this Audible book.

I’m not a big fan of insta-love and even though the attraction was fast, I still felt the heat of this couple. Enjoyed that this wasn’t a whiny girl waiting to be rescued. This gal had no trouble saving herself.

There’s a few background details you miss by not reading other stories in the series, but I find this could be an easy standalone. A little bit of action and low angst made this story go by quickly.

I have everything Michelle Kee has published. The narrator did a good job too. And his accent fit the story location.

This was the first book I've read/listened to by Michelle Kee. The storyline was good. At first I had trouble keeping up with the characters. I may have been at a disadvantage since I didn't get book one, but this was good as a standalone. The writing is simple, was told more about how to feel verses actually feeling the emotions myself.

Michael was a good narrator. His performance is best with male voices. I did get use to the female voices by the end.

*I received this audiobook for free and this is my voluntary review.

Michelle Kee delivers another terrific novel in her “Blackout Security Inc” series. It is a well written suspenseful romance, it grabbed my attention right from the start and held it straight to the end. The characters are realistic and easy to relate to. Alora St. James is not just a baker she runs her own business, she designs beautiful cakes and sweet treats for special events, one of the best in the industry. She learns her boyfriend, Sam Malconi, is not who she thought he was she goes for help and is referred to Blackout Security. Lance”Hawkeye” Archer is intrigued by Alora but he not get involved with clients and he is not interested getting involved with any woman, his ex burned him and left him with a bad taste in his mouth. The chemistry between them is undeniable and smoking hot. I loved how everything plays out in this book, it is well plotted and there is never a dull moment. There is plenty of drama, angst, action, twists and turns, thrilling and suspenseful moments, heartfelt ones and the start of a great romance. Michelle Kee, thank you for another great story!

Michael Norman Johnson is a terrific narrator and voice artist. He does a great job portraying the characters, bringing them to life and humanizing them with personality and attitude. He sets the perfect tone for the story, captures the characters emotions as well as the drama of the story which is heard in his performance. He is an entertaining storyteller and a pleasure to listen to. Thank you for this great listen🎧

This was a action filled, steamy story that keeps you wondering what will happen next. It is part of a series but could be a standalone as well. This was a pretty hot listen with a major Alpha protective man and a head strong baker. Michael Norman Johnson does a great job.

I was given this free review copy audiobook at my request and have voluntarily left this review.
AudiobookObsession
AudiobooksUnleashed

The Soul of Archer

I was really excited about listening to this book. The synopsis sounds so great. There just seems to be no chemistry between the two. I don’t feel it. The danger and the boys from Blackout Security are the better part of the story. I did listen to this on audio and the narrator did a good job

This has been a well written and well performed romance. I enjoyed listening to it.

I enjoyed this book.
Found the main characters very likeable.
Story line had lots of action .
Foumd myself wanting them to be free of the bad guy's so they can be togeather.
Narrator was easy to listen too. Brought a lot to the book.

I loved these characters. They are strong and resilient. The relationship gets stronger with every incident. Excellent narration from Michael.

This author has been reported as plagiarizing Raine Miller's book The Blackstone Affair in her first book "Blackstone's Heart". I received a code from the author to review this book, but was not aware of that until after I redeemed it. The author denied it, of course. Do your own research before purchasing.