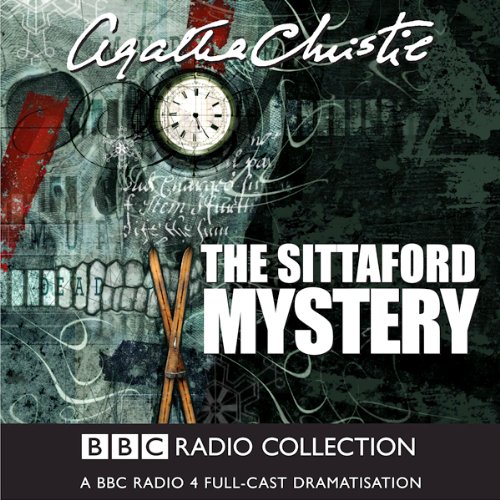 A blizzard has hit England. In the tiny village of Sittaford, on the fringes of Dartmoor, a party of six is gathered in Sittaford House, home of Captain Trevelyan. He has rented the house out for the winter and is staying in a nearby village.

As evening draws in, a seance is proposed. But it reveals more than they had anticipated - TREVELYAN DEAD, spells out the board. Slowly the table begins to rock again, spelling out the word M-U-R-D-E-R. Is it true? And who would kill a man who doesn’t have an enemy in the world?

John Moffatt and Stephen Tompkinson star in a BBC Radio 4 full-cast dramatisation of a classic from the Queen of Crime.

Look for this title to pop up on sale and grab it at discount! The cast does credit to small-town British evils, with even pacing and careful plot development. A murder occurs in wintry conditions, and possible culprits abound!

Would you listen to The Sittaford Mystery (Dramatised) again? Why?

Yes. I have listened to it several times. It is a clever mystery.

What was one of the most memorable moments of The Sittaford Mystery (Dramatised)?

What about John Moffatt and Stephen Tompkinson ’s performance did you like?

All the voices were distinct and fit the characters. I could visualize the scenes.

Emily is a plucky heroine. I liked her interactions with the other characters. Good non-series short story.

This was a very good story and I liked the suspense in the story. The murderer was surprising and a little bit expected

love it. one of the best stories and great performances from the radio actors. this is why we like Audible.

The performances were superb! I knew the story, but the performances made it new and more enjoyable. Rarely do I listen to a book more than once; this will be the exception. I look forward to more full cast productions.

One of the best stand alone Christie stories

Entertaining and well performed full cast audio adaptation of Agatha Christie's book. As each mystery unfolds, it is easy to imagine you are really there experiencing it all.

Excellent production of this story. The parts are played so well, and easily discernible from each other. One of those Christies stories that twists and turns and really gathers speed towards the end.

I really loved to sound effects, fire crackling, snowy sounds and crunching of feet in snow. Really creates a warm cosy feel or icy depending on scene. Music is used occasionally to add to the mood and atmosphere.

Parts are actually really scary! But then I don't want to spoil the story...

Loved it! Perfect for dog walking and ironing!

Great for a winter's evening

The usual Agatha Chrisite - easy to listen to, excellent characters - just right! The BBC radio collection are well worth space on the shelf.

Great masterpiece of misdirection. Atmospherically-staged; believe me, you will definitely feel the cold and wind!

Brilliant performance from all actors. The story is superbly brought to life in this adaptation. One of my Christie's favourites.

This is a winner all round and not just for the characters. Agatha Christie keeps her listeners on their toes as we are juggled around this fascinating who dun it. As with all of Christie’s work, no matter how many times you hear this it remains just as fresh and enjoyable. A great full cast with no Poirot nor little old lady, but John Moffat is there in the cast - see if you can spot him.

Good Christie, but not Poirot

I've been seeking out all the Hercule Poirot stories that feature John Moffat as I just love his Poirot. But in this dramatisation he plays a minor character and there's no Poirot! Should have read the blurb more carefully. Still a good story, though, if you like Agatha Christie :)