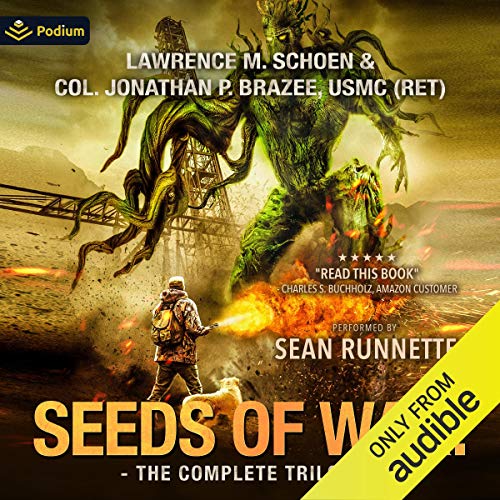 Retired (and exiled) Marine Lieutenant General Colby Edison’s farm is overrun by a horde of alien plants, leafy gremlin-like creatures that begin systematically destroying first his crops and then his home. And not just his farm, but all the surrounding farms as well. The relentless plants have apparently killed his neighbors, and clearly, he and his dog Duke are next. But as a retired Marine, Colby has resources and skills not shared by other farmers on the newly terraformed agricultural world of Vasquez and soon he is bringing the fight to the invaders.

Except...who is really invading whom? High in orbit above Vasquez, a sentient vegetable studies the planet it had seeded and sculpted centuries before, laying it out as world-sized garden. Now, returning to inspect the progress of its work, it finds its art has been tainted by the intrusion of crop grids, farm buildings, and people, all of which must be purged if the garden is to endure.

When two species clash, only one will survive.

Former psychology professor Lawrence M. Schoen and retired Marine Colonel Jonathan P. Brazee join forces in the Seeds of War trilogy, pitting Marine against Gardener, with the fate of all of humanity hanging in the balance.

On the plus side, this was a free listen. The concept of humans clashing with a plant-alien species was promising. And, I did enjoy the alien POV interludes. However, based on the cover art and summary, I was hoping for a pulpy, action filled alien invasion story; what I got was a bland bore. There are only small moments of humor, excitement, and smart dialogue.

80% of this book is just a man and his dog vs. the literally faceless alien menace. Colby conveniently acquires special skills, allowing him to repeatedly, single-handedly win battles, which are narrated in unexcited fashion. The few other characters with names are one-note, such as the caricature bad guy: a back stabbing, money grubbing politician with zero redeeming qualities.

For a better military v monster story, try The Extinction Cycle by Sansbury Smith (first thee books are free in an Audible Plus omnibus). For an outstanding sci-if man vs monster storyline, try that author’s Hell Divers series. For pulpy kaiju-style stories, Jeremy Robinson has several, from traditional to twisted, like Tether. And, if all you want is pulpy sci-fi, military monster mayhem, try Harper’s 10... it’s Aliens meets Pitch Black in a short, free Audible Plus listen.

This storyline is very interesting to me.
I truly enjoyed listening to it.

It ends as tho there could be more stories from this one. Although at the same time, it was a good ending in itself.

There were many situations where u had to think about the conflicts of who is the real enemy & did they really start a war
(It’s hard for me to explain, hope this makes some sense)
Great read!
p.s. Really want more....

I really liked this book.

Sean Runnette is a great narrator, as always. the story was fairly quick to start and had enough action to keep me happy. As a former Marine I really appreciate the attention to military details and correctness as so many authors seem to "wing it" or guess.

Very unique , well thought out , no useless vulgarity,I enjoyed this from start to finish!

Sounded cool, with a fresh idea of an invading species, but I couldn't get further than book two. Narrated well, but too much topic jumping. Invasion to political drama, then painfully long bouts of constipated struggle. Not bad books, maybe just not for me. Narrator sounds and reads perfectly for the main character, but any other character just seems to sound like an old man much in the style of Kevin Pierce.

Deferent take on a old story

Over all liked it. Fresh take on “Alien invader”. Few spots the writing got a little ruff but enjoyed the book. I would absolutely get the next installment.

Got this for free with Audible Plus. Still feel like I overpaid! Great if you want something to make you fall asleep but other than that, not so much. The reader does a great job but the story is just mind numbing.

Not my cup of tea, to slow paced very bland had to force myself to keep reading. Best part of the book is the cover

It was different , I’m sure a liberal and a climate change writer wrote it. But it’s an ok story. Action pack was ok. I liked the dog too, I wouldn’t look for a sequel and if there is I wouldn’t waste my time. But if you are doing what I’m doing , listening to all the free stories than ok it’s a good listen. But I definitely would not pay for it.

1st off, what a great performance. I can't imagine someone doing a better job with these characters. Kudos to the performer.

2nd, as a formally enlisted Marine I always try to keep an ear out for discrepancies with Military in entertainment. I am happy to say that I thoroughly enjoyed this despite being ready to rip it apart. I didn't find much to whine about. The characters were well done with respect to the military and a wonderful sense of pride and love for the Corps.

3rd, wonderful sci-fi story with a good look at both sides. Nicely done work here. I dare say others are bound to enjoy this.