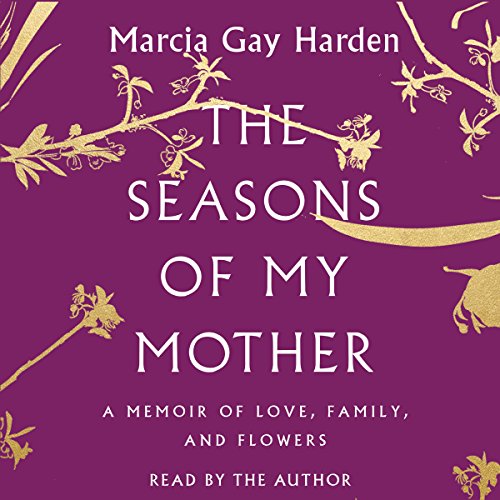 The Seasons of My Mother

"Actor Marcia Gay Harden's voice radiates love in her unusual memoir.... Harden's tone is even and gentle, only occasionally becoming a frustrated growl under her breath when she voices self-doubts and her frustration with her mother's descent into Alzheimer's. The listening experience is intimate and inspiring." (AudioFile)

In this poetic and inspiring memoir, one of America’s most revered actresses uses the imagery of flowers and the art of Ikebana to depict the unique creative bond that she has had with her mother throughout the years - and how, together, they are facing her mother’s struggle with Alzheimer’s disease.

Marcia Gay Harden knew at a young age that her life would be anything but ordinary. One of five lively children born to two Texas natives - Beverly, a proper Dallas lady, and Thad, a young officer in the US Navy hailing from El Paso - she always had a knack for storytelling, role-playing, and mischief-making. As a military family, the Hardens moved often, and their travels abroad eventually took them to a home off the coast of Japan. It was here that Beverly, amid the many challenges of raising a gaggle of youngsters, found solace in Ikebana, the Japanese art of flower arrangement.

Using the imagery of flowers and Ikebana as her starting point, Marcia Gay Harden takes us through the different seasons of her mother’s life, all the while weaving in the story of her own journey from precocious young girl to budding artist to Academy Award-winning actress. With a razor-sharp wit as well as the kind of emotional honesty that has made her performances resonate with audiences worldwide, Marcia describes the family’s travels overseas, her flourishing career in New York and Hollywood, and, most poignantly, Beverly’s struggles today to maintain her identity as she tackles her greatest challenge yet: Alzheimer’s disease.

This memoir illustrates the uniqueness, beauty, and unforgettable love of motherhood as Marcia does what Beverly can no longer do: She remembers. Like a cross between Mary Karr’s The Liars’ Club and Lisa Genova’s Still Alice, this memoir is a lyrical, loving homage to one mother’s strength as reflected in the tenacity and artistry of her daughter.

The Seasons of My Motherに寄せられたリスナーの声

beautiful poignant memoir. bittersweet and honest. Narration was so soothing. Harden is smart, honest, and likeable

Tender Memoir of a Wonderful Mom

Wow! I have always loved Marcia Gay Harden's acting, but this story of her mother and their relationship is the best book I have listened to all year. Heartfelt tribute from a loving and devoted daughter. Loved it!!!

Loved this book and it was so much more meaningful and relatable hearing it directly from Marcia Gay Harden. Alzheimer’s is such devastating disease and so sad but found comfort in knowing that the memories still live within the family and in Marcia. Beautiful family and such a beautiful mother daughter relationship.

I am so glad I "read" this book on Audible. It was wonderfully written and Marcia Gay Harden's narration made it perfect - just a wonderful book experience and makes me remember to appreciate and honor my own Mother! A beautiful story about a beautiful life!

I thought I was going to learn more about Alzheimer’s

This was a lovely story about the mother - daughter relationship. I was hoping to learn more about Alzheimer’s since I’m newly experiencing this with my mother.

I simply loved it

Loved it,. Will share thank you! Laughed, cried was overwhelmed just need to listen to the end.😀