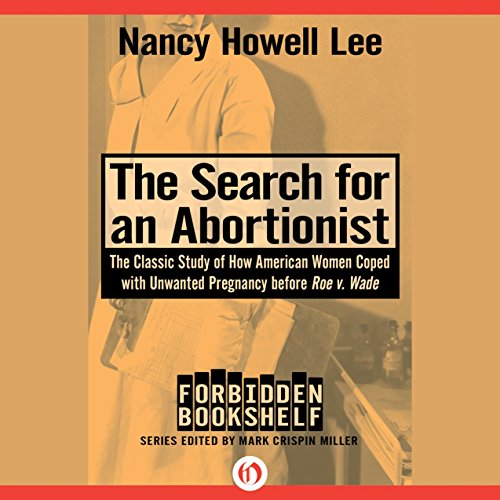 The Search for an Abortionist

This eye-opening look at the abortion process prior to the Supreme Court’s landmark Roe v. Wade decision of 1973 is now more relevant than ever, with a new introduction by the author revisiting history that is still salient half a century later.

In the years before Roe v. Wade, women seeking to end their unwanted pregnancies had limited options - many of them dangerous, even potentially fatal, and nearly all of them illegal. This groundbreaking work by sociologist Nancy Howell Lee, first published in 1969, takes an intimate look at the entire abortion process - from the initial decision to terminate a pregnancy through the procedure itself and the aftermath - providing an incomparable view of what is still one of the most controversial and divisive issues in America.

Based on interviews with 114 women who had illegal abortions, Howell Lee’s book reveals how the abortions were procured and paid for, and looks at the lasting effects the experience had on the participants. The interviewees were open and honest about what influenced their decisions, how they conducted their search for someone to perform the procedure, and the physical and emotional aftereffects. With many state governments across America currently passing new legislation that restricts and, in many cases, effectively bans abortion, an eventual return to the pre-Roe days threatens the well-being of millions of women, making Nancy Howell Lee’s pioneering study more relevant than ever. It is a must-listen for pro-choice and pro-life adherents alike.

The Search for an Abortionistに寄せられたリスナーの声