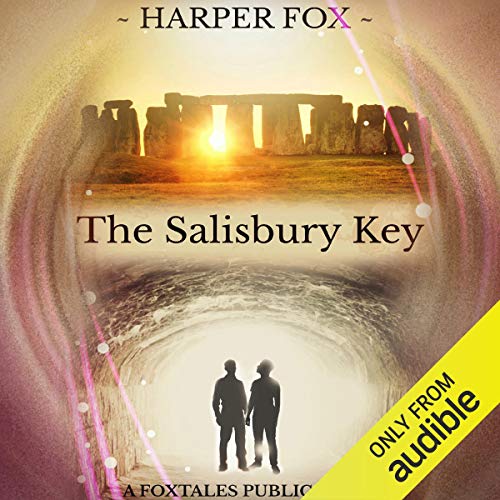 This is the FoxTales version of the work previously released through Samhain Publishing. Other than the cover material, the book is the same.

Shattered by his lover Jason's suicide, archaeologist Dan Logan is struggling to patch his life together again. He's desperately following up Jason's final obsession, a secret buried deep within the military zone on Salisbury Plain. Anything is better than facing the void of his grief.

He's convinced he'll never love again. When unexpected help arrives in the form of a soldier named Summer Rayne, the last thing Dan could have predicted is the spark of attraction between them. And at first their relationship is fraught with so much conflict, their investigation into the circumstances of Jason's death looks more likely to cause one of their own.

But Rayne is smart, and very kind beneath his soldierly reserve. As the mystery of the Plain begins to vortex around them, dangerous secrets emerge, and Rayne and Dan have to work closely together to protect one another and the sanctity of Jason's memory. A wild new romance takes fire against all odds in the heat of a Salisbury summer, and the soldier and the archaeologist are only on the brink of the mystery of the legendary Salisbury Key.

Makes you cry, laugh, and scream

I am absolutely in LOVE with the character Danny. The Narrator has such a real interpretation of the character that I now know Danny. The way he spoke was fantastic and every time Danny said Luv I ached because it was not to me.
I nearly cried when Danny's partner died and I screamed when his new partner gets hurt.
Being a gay man in my 50's this book gives me hope that some where there is an intelligent 20 something guy looking for me who can show the same compassion and love for me that Danny showed for Jason.
As for the story it is good, I would add that it needs to be tightened up a bit as it tends to jump in time leaving the reader (listener) to wonder how the character got to this place. The answers does come eventually but it possibly does not need the time difference.
I found very slight things that I would change but on the whole I would fully recommend this book.

I have the kindle version of this book and it’s been a favorite over the years. I’ve been waiting for the audible version, and was not disappointed now that it was finally released. The narrator was excellent, overall definitely worth the credit.

Wonderfully and intricately written. The characters are fully fleshed out and filled with powerful depth. The narrator adeptly breathes the final and complete life into an amazing work.
A warning however: because of the heavy and powerful emotions explored in this book (grief, loss etc) perhaps persons with more fragile mental states should be cautious.
All in all, a wonderful experience I cannot recommend highly enough.

Can't get passed someone claiming to be in a wonderful relationship who hooks up with somebody else before his longtime lover is even in the ground, that's the kind of person we call Trash, that premise alone makes this book awful. The story had potential, alas, dumpster fire comes to mind. I'm so disappointed, i really wanted to like it.

I love that this book is a legitimate story that is also a romance. The story was intriguing and the passion felt real. And Hamish Long... woah. He can narrate. This is a must listen.

I don't know what I expected when I started this book, but it wasn't this. This book was an emotional roller coaster ride. Very few books make a lasting impression on me, but this one has. It was written with empathy, patience, and compassion for the human condition in all its fragility.

Harper Fox is one of the most insightful writers I've had the pleasure of reading. I highly recommend this book.

I really enjoy this authors stories! They are a cut above your run of the mill MM romances!

Different than I expected

What a great book! Not so predictable like many of the stories in this genre. Give it a chance and you will like it too!

To be honest, I was expecting this book to be bland or just “ehh”....but that was only because I only because of the book’s art cover.

The book has a really good story and lovable characters. I went through a rollercoaster reading this. It was sexy, sad, exhilarating, and heart warming. This was my first read that’s not so science fictionly so this was a new type of read too.

The NARRARATOR. He was astounding. I’ve read 2-3 books with him reading and it was so good. He does an excellent job weaving through your emotions and setting a good picture in your mind to feel and visualize what he is reading. 10/10

Not very emotional or romantic, but a captivating story. Very nice naration, too. I go looking for another Harper Fox novel.

Another wonderful story from Harper Fox

I adore this book. The narration is really well done and adds even more emotion to this story. Rayne is such a solid kind character, not unrealistically sweet but a decent kind man. Wonderful archeology and a great mystery combine to make a nicely paced story.

I so love Harpers stories. Riveting, inspirational and what a performance from Hamish! Fabulous, more, more!