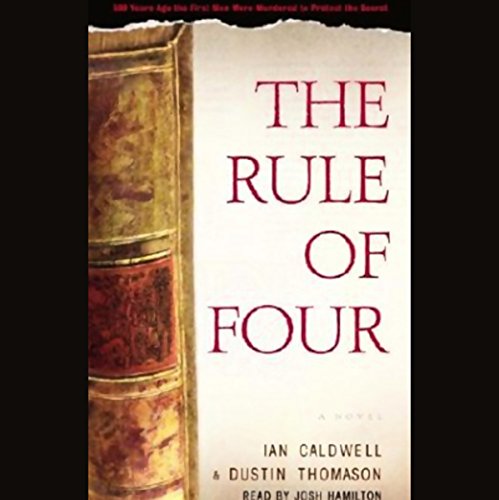 "The authors, best friends since childhood, have made an impressive debut, a coming-of-age novel in the guise of a thriller, packed with history (real and invented) and intellectual excitement." (Booklist)
"A smart, swift, multitextured tale that both entertains and informs." (San Francisco Chronicle)
"[An] intriguing intellectual suspense novel." (Publishers Weekly)

Princeton. Good Friday, 1999. On the eve of graduation, two students are a hairsbreadth from solving the mysteries of the Hypnerotomachia Poliphili. Famous for its hypnotic power over those who study it, the 500-year-old Hypnerotomachia may finally reveal its secrets to Tom Sullivan, whose father was obsessed with the book, and Paul Harris, whose future depends on it. As the deadline looms, research has stalled, until an ancient diary surfaces. What Tom and Paul discover inside shocks even them: proof that the location of a hidden crypt has been ciphered within the pages of the obscure Renaissance text.

Armed with this final clue, the two friends delve into the bizarre world of the Hypnerotomachia, a world of forgotten erudition, strange sexual appetites, and terrible violence. But just as they begin to realize the magnitude of their discovery, Princeton's snowy campus is rocked: a longtime student of the book is murdered, shot dead in the hushed halls of the history department.

A tale of timeless intrigue, dazzling scholarship, and great imaginative power, The Rule of Four is the story of a young man divided between the future's promise and the past's allure, guided only by friendship and love.

This book just fell short of being a great book. You got the feeling they simply ran out of steam as they approached the end of their story. Yet, it still made for a good read. I hope they do a sequal, I would bet the next one will be better.

The concept of a medieval noble saving invaluable art and literature treasures in the face of Machiavelli's crusade to rid culture of unholy influences is great. But, this poorly written, disjointed book spends 1% of time on the plot and 99% on a grinding merry-go-round of thinly-drawn characters. I couldn't wait for it to be over.

I was disappointed by this title, though I admit that it makes good trashy-novel-on-vacation reading. The authors flaunt their erudition at a pedantic adolescent "see what I know" level. The plot focuses far too much on perceptions of glamour and privilege at an ivy league university, and the criminal plot turns are entirely unbelievable. It is fun if you are in search of light reading with a puzzle plot, but you will need to tolerate the self-conscious writing.

I enjoyed this book, I especially found some information in this read enticingly curious. Which in itself has led me on a new journey of discovery. If you can read/listen between the lines and not be too consumed with the story line, there in lies some very intriguing information here. With a little time and some adventurous energy one could continue on to another adventure. The only regret bestowed is the ending, a bit of a let down after all is said, but leaves you wondering if a sequel is in due. All in all a very nice book.

I selected this book based on reviews comparing it to The DaVinci Code, and was very disappointed. It was difficult to get interested in the plot, and the characters just didn't have much going for them. I finally gave up trying to get through it.

I got caught up trying to follow the book - mostly because it didn't capture my attention until it was about three quarters of the way over. I would recommend reading it, though - if anything, the brushing up on the Renaissance was good for me! In the end, I'm glad I listened to it but would suggest either paying better attention or just not worrying about it and realizing that it will come together (for the most part) in the end.

Good, but not great

I too found this book inferior to The Da Vinci Code (and to Angels and Demons for that matter); however, it did contain a dramatic plot that encompassed both fact and fiction. Buy it, if only to keep up with the New York Times best seller?s list, but don?t expect DVC caliber.

I did not find this book at all comparable to the DaVinci Code. Somewhat intellectual, but ponderously so.

This audio book was very disappointing all around. The characters were barely developed, the "added" romance/relationship seemed like it was just thrown in, and there was absolulte no closure at all...I like an open-ended novel just as much as the next person but with The Rule of Four, there was unfinished business every where. The narrator was very monotonous and overall the book had a great concept but no substance...I couldn't wait till it was over, yet I continued to listen thinking that something significant was going to happen...maybe I missed something...would not recommend.

The Rule of Four was interesting but it seemed a bit contrived to me.

The contemporary murder mystery plot seemed to be pasted around the solution to the riddle of the Hypneratomachia, rather than being believably intertwined as one. Of course, this might have been due to the abridgment. Too bad the unabridged edition was not available--perhaps it would have appeared a better integrated whole.

And the plot wasn't nearly as exciting as was the plot of the Da Vinci Code--which I liked a whole lot more than The Rule of Four. I'm glad I "read" The Rule of Four, but it isn't one of my favorites.