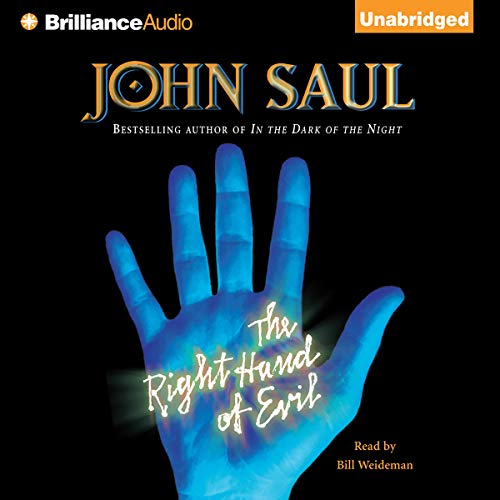 "Best-selling Gothic Suspense-meister John Saul is back with a gory tale of evil that is both extreme and entertaining." (Chicago Tribune)
"Bill Weideman's reading is expressive, and his words are clearly enunciated." (Library Journal)

Just as their troubled marriage is reaching the breaking point, Ted and Janet Conway inherit a home that has been in the family for more than a century. Eager to make a new beginning, the Conways and their three children head for the promise of a better life in the small Louisiana town of St. Albans.

But within the long-abandoned, sprawling Victorian manse lies the dark history of the Conway name - a grim bloodline poisoned by suicide, strange disappearances, voodoo rituals, and rumors of murder.

The Conways know nothing of the soul-shattering secrets that, once revealed, will threaten to consume every living soul in their fiery wake. For with each generation of the Conway name comes a hellish day of reckoning.

The Right Hand of Evilに寄せられたリスナーの声

John Saul is 1 out of the top 3 of my favourite authors. John Saul, Dean Koontz, AND Mark Tufo. I've noticed that Mr. Saul has a thing for schools and Catholics. don't get me wrong, I love his books. but sometimes it makes me think, what happened? anyways. this is another fantasticly hair raising book that he has created centered around a catholic school. if you're a catholic, don't take it personal, haha.

I usually like John Saul books this verged on getting good, then becoming ridiculous then back to being good... then WTF.... then just dumb. I thought the ending was.... (after all that).....REALLY!!!!! My advice DON'T BOTHER....not his best :(

The Right Hand of Evil

Not typical of John Saul at all, I was very disappointed. It continuously put me to sleep.

I love these kind of books and this one dimid not disappoint..I ecommend you try it

This book was better than I expected. Listen to it during a long road trip. John Saul usually does not disappoint

I've listened and read many John Saul books over the years, and almost enjoyed every one.

I found it hard to get into this particular story and actually started 4 or 5 times before I finally got going. As it has a copywrite of 1999 it is obviously one of his earlier books.

Well, I eventually got to the end of the story and it does have the hallmark of the books John Saul writes. It is not one of his best but I am sure I will listen to it again, just to see if I could have made a mistake and it is actually better than I at this moment think it is.