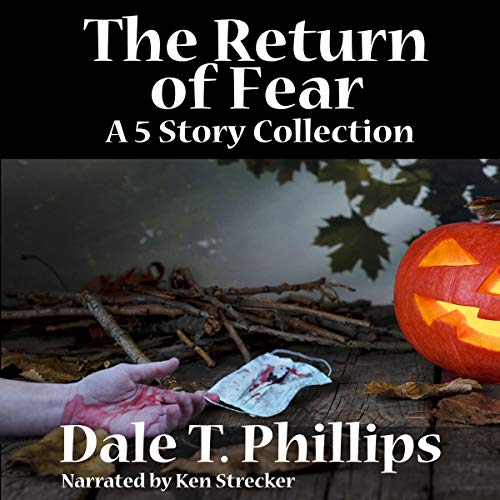 Here are five scary stories about different types of terrors that haunt us. Some are deserved. Some come from the pits of evil for the innocent. These tales come together for the first time to keep you up at night. Enjoy the ride on the scary rollercoaster.

Decent Collection, Nothing too Scary

Ken Strecker did a good job with the narration. I liked his chacter voices and overall cadence.

The Return of fear

A really good collection of 5 stories to chill you.I think I liked the first one best.Ken Strecker was a fine narrator.I was given this free review copy audiobook at my request and have voluntarily left this review.'

This was a good collection of short, horror-type stories that keep you engaged. I enjoyed them and the narrator was great.

Let me start by commenting that Audible seems to be the only platform where I can leave a review. I couldn't find this book or the author listed on Goodreads and there was no "leave a review" here link on Amazon.


I love scary stories, but I seem to rarely find any even if the book is listed as “scary.” Unfortunately, that was the case with this batch of short stories. I think this batch would have been better for kids, sans the sexual talk and cussing.

This is a new narrator, right? He had all the telltale signs of being one. I’ve listened to, or attempted to listen to, brand new narrators and sometimes I can “see” the potential, other times, not so much. The latter are typically ones who I honestly have no clue why they considered narrating in the beginning. I get that not all narrators, whether male or female, can pass with a tone/voice from a character of the opposite sex, ie a male narrator doing a female character voice or vice versa. But if you can’t even lower your voice (for a male narrator to female character), then maybe narrating isn’t for you. When it seems as though you have a hard time just providing a small variety of male character voices to keep them different from each other, without them sounding crazy, yeah… When you don’t even think of changing a character’s voice (Kathrine from the first story)… Or when you add emphasis to a word or words in the middle of a question and not the last word, it sounds strange. This seemed to be most prominent in “Jack-O’-Lantern.” The plus side to this narration was that in the final story, he provided the “sound effects” for the man who’d been shot, which unless there’s some hesitation shown in the author’s writing or verbally saying the character was struggling to speak or breath, most of the time it seems narrators just talk normal for them, no matter the situation they’re in.

The narrator did it in for this story aka he didn’t add anything to it. As soon as he began with the Spanish accent (hearing him say “hola”), I rolled my eyes and shook my head, like “This is the wrong narrator for this story,” which was also the case for the last one. I swear it was like he’d never heard a Spanish accent before! This story was predictable and all the foreshadowing was unnecessary especially given how short the story was. Having Kathrine randomly take up smoking at the end… What was that about? No one, or I would assume a large percentage of nonsmoking people would just plop down next to a smoker and decide “Yeah, I’m going to try smoking today.” No.

I found it funny that after Burrows “accidentally” kills the prostitute with his hook, like right after that first swipe of it against her neck, the hook is described as “blunt.” If his hook were blunt, he wouldn’t have been able to so easily slit the throats of people. Also, the prostitute's blood is described as smelling “burnt.” Why? It wouldn’t be sharp, period. Blunt = dull/not sharp. The idea that everyone he came into contact with, minus the art-girl, found his hooks “disgusting,” I didn’t get it?! Why would they be considered disgusting? The fact he randomly went about killing strangers, didn’t work for me. I feel like that was a play on the whole stereotypical depiction that all military people who go overseas are killing “bad guys,” so, in this case for the Burrows, it was easy for him to continue that when they came home. That of course is not the case whatsoever. In the end, when Burrows shows up at art-girl’s house, which was very strange because if he found her address, then why not her phone number, it’s like the story ended on a very strange note, like it was unfinished.

The premise that the house was left to Jay’s father, as he was the only family member left, was reasonable. Got it. But being told that the previous owner, owners, were his cousins… That was strange. At first I thought I misheard and it had been his “cousin” (singular) that had lived in the house and later disappeared. But no, there were multiple references to it being his “cousinS” which wouldn’t make sense because if they’re both his cousins, so why in the world would they be living together and have a child? Yeah, no. The fact Jay’s mother thought they’d just moved away was hilarious since she said it so seriously. If they moved away, the house wouldn’t have been “settled by the estate” because it would still have an owner, albeit one who wasn’t living in it. Therefore, the owners should have been dead (which was later the case). The little girl and old man voices for this one? Too funny! In a bad way of course. The ending was strange. I didn’t really understand why the old man was killing people. Him just being there when Jay got home, obviously having already killed her parents. I was bored. Bored with all the stories.


I received a free audiobook code in exchange for an honest review.

These short stories were awesome. They were even better because they could actually be possible. I would love to listen to more.

I was given a copy of this recording in exchange for an honest review.

I really enjoyed this book and all five of the tales. The narrator did a fantastic job with voices and bringing the stories to life. The storylines are well written and some are truly terrifying. I reccomend this book if you like horror books. I received this book from Audioboom and this is my totally unbiased review.

A solid and very enjoyable short story anthology from Dale T Phillips.
The author’s writing kept me interested and there is a quality of humanity about his work. Only once was I slightly disappointed when I was expecting a twist in the tale, but none came. To be fair, the story stood well without a twist anyway, so the letdown was minimal and soon forgotten. I won’t reveal more about this because I hate a spoiler as much as the next gal!
Excellent, fully-fleshed narration from Ken Strecker.

This book was given to me for free at my request and I provided this voluntary review."