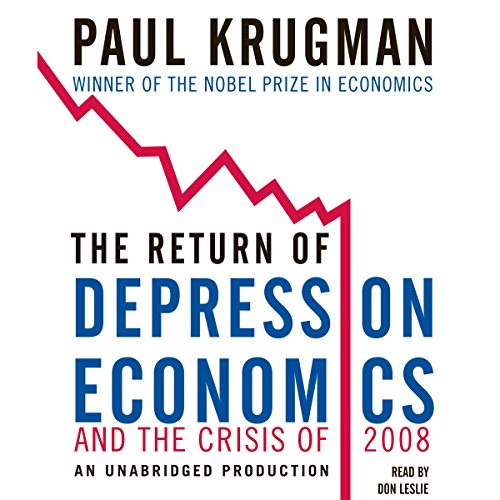 The Return of Depression Economics and the Crisis of 2008

“The most celebrated economist of his generation.” (The Economist)

“Krugman’s facility with both arcane details and vast unified explanations boils down complexity so much that the reader often wonders: Why didn’t I see it that way myself?” (Boston Globe)

In 1999, in The Return of Depression Economics, Paul Krugman surveyed the economic crises that had swept across Asia and Latin America, and pointed out that those crises were a warning for all of us: like diseases that have become resistant to antibiotics, the economic maladies that caused the Great Depression were making a comeback.

In the years that followed, as Wall Street boomed and financial wheeler-dealers made vast profits, the international crises of the 1990s faded from memory. But now depression economics has come to America: when the great housing bubble of the mid-2000s burst, the US financial system proved as vulnerable as those of developing countries caught up in earlier crises and a replay of the 1930s seems all too possible.

In this updated edition of The Return of Depression Economics, Krugman shows how the failure of regulation to keep pace with an increasingly out-of-control financial system set the United States, and the world as a whole, up for the greatest financial crisis since the 1930s. He also lays out the steps that must be taken to contain the crisis, and turn around a world economy sliding into a deep recession. Brilliantly crafted in Krugman's trademark style - lucid, lively, and supremely informed - this new edition of The Return of Depression Economics will become an instant cornerstone of the debate over how to respond to the crisis.

The Return of Depression Economics and the Crisis of 2008に寄せられたリスナーの声

A very interesting analysis of the causes of and remedies for the current and historical recessions and depressions, and the actions that have been taken and could be taken to ameliorate them. However, I recommend that the book be enjoyed in hard copy rather than in audio. The material is dense, and Krugman throws out references to many technical aspects of domestic and international finance. Although Krugman states at the outset that he's trying to avoid economic jargon and abstruse economic concepts, so that a broader audience can understand his analysis, he assumes a level of understanding of the forces that operate in finance that I believe most listeners won't have.

So much of this book, I did not want to hear. The more I wanted to turn it off, the more I kept listening. Because I spend much time in Bangkok, Thailand, chapter 3 on how crony capitalism in emerging markets really got my attention. The detailed mechanism of the '97 Asian financial crisis, which seems to be repeating itself in the US now, was cogently delineated, albeit with an attitude. Chapter 6 on hedge funds also opened my eyes to the rise and fall of money. Hear it but be prepared to turn it off only to turn it back on again!

Lucid and informative to the Nth degree

I've followed Krugman in the NYT for some time, so was much gladdened by the appearance of his work on Audible. The work requires the listener pay attention -- not as if you were defusing a bomb, but definitely more than a piece of pure fiction. The historical perspectives are truly enlightening in their own right, but as the basis for understanding the present superbly invaluable. Krugman's analysis is supported my much experience, data, and a superbly trained eye. That's why I think this work can be fairly classified as neutral in political perspective. He lets the evidence make his point and strengthen his conclusions, which makes for, in my mind, a very credible description of why we are where we are, and where we need to go next. As I said at the onset one needs to focus when listening as the work will engage one's critical listening skills if your to enjoy the work. Again, a masterful piece of historical analysis and explanation of the present. Well worth the buy!!

So Relevent, So Impactful

This book came about before the crisis started in the United States, but in it Krugman examined the economic situation in Latin America and Asia and draws startling conclusions about the fragility of the current shadow banking system and the lure of free credit that spread throughout the world at the beginnings of this century. When his predictions came true he updated the book to include information about America and re-released it. This book is a treasure, full of insight, description and enough actual economic theory to understand the crisis and not just balk at it.

Moreover, Krugman's writing is masterful. He deftly describes serious economic topics in very straightforward language. You come away not only informed but able to talk about what you learned with people. Today, we spend so much time watching talking heads try to figure out what to do about debt and employment. This book lets you understand the conversation and know who's serious and who's seriously dangerous. Please buy this book, please read it and get involved in the conversation!

Krugman offers a comprehensive context for the crisis of 2008 and events still unfolding today. The professor deserves high marks for brevity and an elegance of presentation regarding the intricate connections of financial plumbing and investor psychology throughout history as manifest in bubbles, panics and crashes.

I withold the 5th star because his treatment of Alan Greenspan is cursory, dismissive and, I believe, unfair. The former fed chair turned universal scapegoat presided over a period where the effectiveness or normal tools of monetary policy changed in inexplicable ways. Krugman, of all people should recognize and acknowledge this.

Stay away if you have no economics background.

Ok book, kinda tailored too much to people who work in that field. I was hoping for a more everyday man friendly book. I got the impression that's what it was supposed to be.

I was very very disappointed with this book. I love Paul Krugman but hated this book. I could not believe that a Nobel Prize winner could write a book about the most important crisis facing the world today and not have any original ideas about how to get us out of this mess. Moreover, the book title is totally misleading - only a small portion of the book (the very last chapter) discusses the current crisis. And that chapter does little more than repeat what Krugman says in his NY Times column - the government should spend our way out of the crisis. The rest of the book is an economic history lesson of what happened in all the other economic crises since the Great Depression. And it is not even a very good history lesson. Not only was the book bad but the narrator was also bad. I could not stand to listen to his condescending tone. Save yourself the time and the credits. If you are interested in reading what Krugman thinks read his column. If you are interested in an economic history book (which this is) there are much better ones out there to read.

What made the experience of listening to The Return of Depression Economics and the Crisis of 2008 the most enjoyable?

The author does a good job of articulating his complex and deep issues into terms that the non-economist can understand. Further, he uses very well-considered real world examples to further demonstrate the mechanics that he is describing.

Which character – as performed by Don Leslie – was your favorite?

Krugman takes economic problems (down turns, recessions/depressions, rallies) from around the world over the last 100 years and highlights key contributing characteristics for ultimate application to the 2008 crisis. While competitive (incorrectly named "free") markets contribute tremendously to quality of life improvements, there are glitches in that environment where government can tweak the money supply to prevent the glitches from causing catastrophe. He uses an analogy from local DC news where an open market approach causes problems because - without tweaking - demand is naturally high in one season low in another - among other problems - so what is needed is a way for the organization to communicate to members that the high demand season is very taxing on the organization overall so members will adjust demand for the benefit of all, that is, for the benefit of avoiding collapse of the organization.

Resting on his "Laureates"?

I spent 2 credits hoping it would be worth it. It was not. Many leaps of faith - especially claiming that WWII was a Keynesian stimulus. CCC and WPA were, but WWII? Also, suggests there is a simple solution to the problems of the day, but this Nobel Laureate doesn't tell us what it is. Let me try. Work hard, spend less, import less, export more. It's a global economy with global competition. Geez. He gets three because there is much worse out there, but definitely not what I expected.