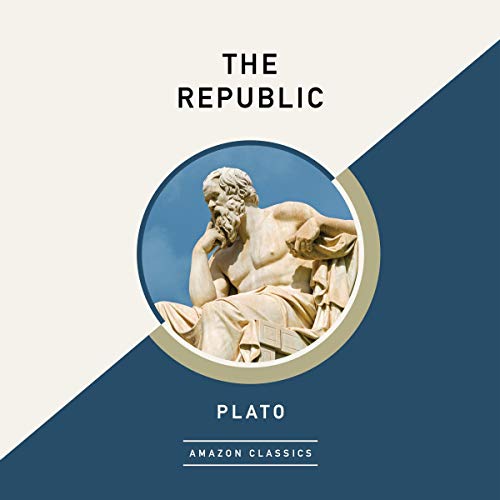 What is justice? In Plato’s Socratic dialogue, The Republic, the citizens of ancient Greece explore the world’s most fundamental question.

In search of an ideal civilization, Socrates leads Glaucon, Polemarchus, Thrasymachus, and others in debates about various subjects, including justice, truth, class, and art. For without righteousness, tyranny and injustice give rise to oligarchy.

The influential dialogues of The Republic helped shape all of Western literature and philosophical thought. It is as much a doctrine of ethics and politics now as it was for the ancient Greeks, and its dilemma remains: how to create a perfect society populated by very imperfect human beings.

AmazonClassics brings you timeless works from the masters of storytelling. Ideal for anyone who wants to listen to a great work for the first time or rediscover an old favorite, these new editions open the door to literature’s most unforgettable characters and beloved worlds.

This is not Plato's Republic

This is not Plato's work; this is a commentary on Plato's Republic. Nowhere in the description or title or cover does audible make this clear. It doesn't even say who wrote the commentary. In the narration, it's impossible to tell when the narrator is reading from The Republic and when he's reading commentary.

Amazon should be embarrassed with this product.
First off it was listed under C.D.C Reeve translation which it clearly is not. If you are going to offer an audio version of a book have the decency and credibility to sell it according to the correct translation.
The narration is terrible- the narrator is so monotone that it is near impossible to tell when he is narrating The Republic vs narrating interpretation and inserting opinions. It’s as if the narrator is on Valium and lacks ability to follow punctuation and lacks inflection.
This translation seems more interested in making analogies to Jesus and a religion that was yet to exist when Plato lived while ignoring what is considered one of the philosophical masterpieces.
Absolute garbage not worth a star on any front and masqueraded as an actual scholarly translation by Grube/Reeve.

Never-ending "Introduction" by a nodoby

45 mins in and still "introduction". Don't care. Where is the Republic? Avoid this mess.

A great review of ancient history in philosophy.

A great review of ancient history in philosophy and how our present lives are not any different than that of those in the BC era of Socrates and Plato.

I enjoyed this presentation of The Republic. However, Amazon can do a much better job in guiding the reader/listener, by making index available showing content of The Republic and commentary respectively. This is a general problem with Audible, but in this situation where commentary and the book are consolidated it is imperative.

The narrator is doing a terrific job narrating this title.

this is not the book its a longwinded commentary

this is not the book. its a longwinded commentary. this should have been made clear in the title.