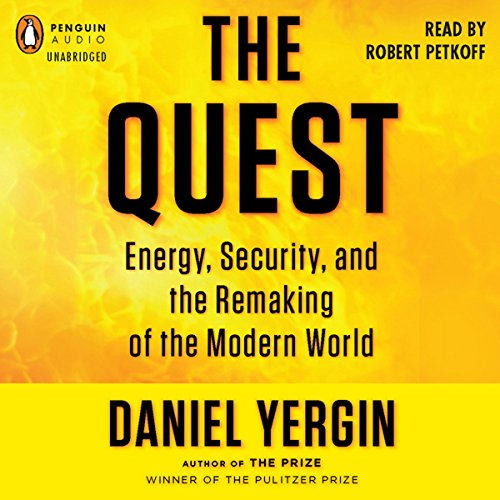 "Mr. Yergin is back with a sequel to The Prize. It is called The Quest: Energy, Security, and the Remaking of the Modern World, and, if anything, it’s an even better book. It is searching, impartial and alarmingly up to date.... The Quest will be necessary reading for C.E.O.’s, conservationists, lawmakers, generals, spies, tech geeks, thriller writers, ambitious terrorists and many others.... The Quest is encyclopedic in its ambitions; it resists easy synopsis." (Dwight Garner, The New York Times)

"[An] important book...a valuable primer on the basic issues that define energy today. Yergin is careful in his analysis and never polemical.... Despite that, The Quest makes it clear that energy policy is not on the right course anywhere in the world and that everyone - on the left and the right, in the developed and the developing world - need to rethink strongly held positions." (Fareed Zakaria, The New York Times Book Review)

In this gripping account of the quest for the energy that our world needs, Daniel Yergin continues the riveting story begun in his Pulitzer Prize-winning book, The Prize.

A master storyteller as well as a leading energy expert, Yergin shows us how energy is an engine of global political and economic change. It is a story that spans the energies on which our civilization has been built and the new energies that are competing to replace them. From the jammed streets of Beijing to the shores of the Caspian Sea, from the conflicts in the Mideast to Capitol Hill and Silicon Valley, Yergin takes us into the decisions that are shaping our future. The drama of oil - the struggle for access, the battle for control, the insecurity of supply, the consequences of use, its impact on the global economy, and the geopolitics that dominate it - continues to profoundly affect our world.

Yergin tells the inside stories of the oil market and the surge in oil prices, the race to control the resources of the former Soviet empire, and the massive mergers that transformed the landscape of world oil. He tackles the toughest questions: Will we run out of oil? Are China and the United States destined to come into conflict over oil? How will a turbulent Middle East affect the future of oil supply?


2011 was a great year for nonfiction, but no book comes close to The Quest for claiming top honors.

Everything we do depends on energy. Every industry, including higher education, ultimately is possible due to energy. Without energy, we could not teach or do research, heat our classrooms and offices, or cool our data centers. If you walked to campus today (or worked at home) that is terrific, but most of us relied on gasoline to power our cars for our commute. Higher ed may not be like the airlines, where fuel is the largest expense (ours is labor), but we are no less dependent on energy to run our business than Southwest airlines.

The past, present, and future of worldwide energy is a big topic, one that requires a big book. The Quest is 816 pages, none of which are wasted. This is an efficient book. Yergin manages to keep the narrative moving along without skimping on either the stories or the numbers.

The Quest systematically examines every major source of energy, including oil, natural gas, coal, nuclear, solar and wind. The origins, technology, sustainability, and personalities attached to each of these major energy sources is given a complete and balanced treatment.

Readers looking either for an indictment or defense of our carbon or renewable fuel sources will be disappointed, as Yergin is scrupulously even-handed and non-polemical. Energy turns out to be too important, and too complicated, to be reduced to simple narratives and slogans. Rather, Yergin manages to consider the role of energy in the environment as well as the economy, while making strong (and actionable) policy recommendations for a sustainable energy future.

A prize awaits for thoughtful readers....

Had a difficult time following the first part of this book as I wasn't familiar with the characters / players / history of the patchwork of states that have emerged since the fall of communism. Perhaps I missed it or perhaps its just impossible to tell the outrageous stories contained in The Prize about powerful people still living. There is probably alot to fear from those people. I would bet my last gold deutsche mark the stories that will one day be told will make this period of time very interesting indeed. Unfortunately I didn't find the first half that interesting, though I really need to sit down with a map and some additional history books to gain a better appreciation. Certainly the role of Russia and its satellites in the world today is vastly underrated. The discussion of Putin and Europe alone is worthwhile enough to justify reading the first 40% of the book.

Really hit stride when discussing the US energy markets and the competing energy alternatives. The book is ambitious and perhaps has too much ground to cover. I know something about these markets so I looked forward to hearing what Daniel Yergin had to say. I have to say I am really impressed by the author. Did he persuade anyone with this book? Probably not as the book is really a quick synopsis of key items and drivers for the energy industry in the recent past and foreseeable future. All as seen and interpreted by Daniel Yergin. I really trust his judgement, but clearly readers who disagree with the fundamental view of the author may not enjoy this book as much. Personally I think if you disagree with Yergin you should benefit from his perspective as he may give you new facts and/or a different perspective. I'm sure certain groups of readers such as peak oilers will disagree however. Highly recommended. Not as easy a read as the Prize... so I used a little p in my headline... still worthy of 5 stars however.

Covers all aspects of our modern energy situation--scientific, technological, environmental, political, economic--in a global narrative history that presents every side of every issue in a fair and straightforward way. Full of compelling stories and fascinating facts.

This book is foundational for understanding the global economic and political challenges of the 21st century, because every aspect of our modern way of life depends on reliable and sustainable energy.

This book was pretty good, with very good narration, but it was a bit dry for my taste. The book is loaded with historical information and factoids about the energy industry, energy production technology and climate change, but it seems to me to lack the perspective, depth, and analysis of a good history and lacks the details of a good technical primer. The book takes a non-investigative journalistic tack and the author seems to go to extremes to not expose his own point of view (which is, of course, impossible). The author’s views come through, but only through subtle framing of ideas. I found this a little insidious. I prefer reading many books with many different, yet strong and clear, points of view. The author glosses over many important issues, then presents a bunch of cute anecdotes. The little science presented is weak at best. A bunch of facts may be somewhat interesting but more scrutiny and analysis would make this a much stronger book. Having a book on energy without even mentioning fusion seems odd to me. I learned quite a bit more from Global Warming: Global Threat.

A must read for anyone in the oil and gas business

It is without a doubt the quintessential first book that must be read for anyone working in the petrochemical industry. If only as a fan of history, it should be a trophy on one’s bookshelf. I’ve listened to it multiple times, and it gets better each time.

solid on the history of the modern energy industry

Fascinating journey through the development of the modern energy industry and the story of what led to the "climate change" conversation. Nothing promised nor delivered on where it is all headed.

It is impressive how Daniel Yergin
compile all those years of Energy history in a unique book.

A must read for everyone who wants to understand and learn more about how energy is intrinsically in our lives.

Every moment and cent you invest in this book will be worth it. Yergin does a phenomenal job exploring the interface of innovation, world history/politics, and energy.

Since I read THE PRIZE in mid-2012, as it was assigned reading for a college course I took I have been a huge fan of Daniel Yergin and the various books he has written, as Energy explains History, not just in the United States but across the world.

I thought the narration is clear & precise, the story fully understandable.

In Depth History of Energy

This book gives a very detailed history of energy, mostly from the industrial revolution until today.
Highly recommend to the Energy nerds out there like myself.