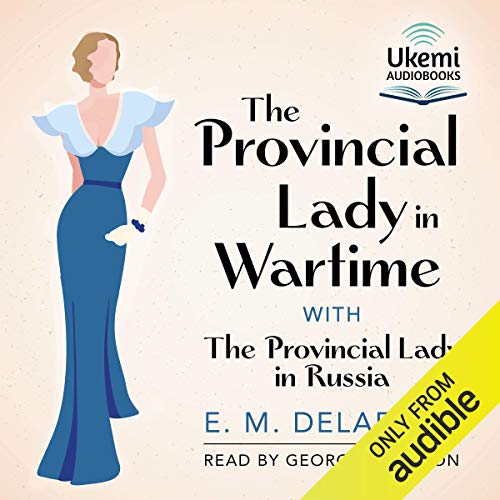 No further ‘Diaries’ had appeared since The Provincial Lady in America (published in 1934) when, in 1939, Harold Macmillan, then chairman of Macmillan publishers and a fan, made a personal request to E. M. Delafield for a new book. The onset of the war with Germany was serious, but, he said, Britain, was in need of the entertaining but pertinent observations from the Provincial Lady!

Delafield duly set to work and produced the longest and in a way the most interesting of the ‘Diaries’ without losing its sense of fun, of seemingly casual frivolity.

The Provincial Lady in Wartime covers a short time - from 1 September 1939 (just before the declaration of war on 3 September) to 21 November 1939, when fact again met fiction and E. M. Delafield was really ‘called up’ to work for the Ministry of Information. As a result, the focus in the book was on the ‘Phoney War’ when the country found itself in a fever of preparation without the intense action that was to follow a short time after.

The Provincial Lady finds herself in London, looking for voluntary work to support the war effort, which proves an unexpectedly difficult thing to achieve. Her interactions with a varied host of companions, also caught up in a strange frenzy, reflect so clearly the mood and tension of the time, yet the account is witty, apposite - and so very English, with the stiff upper lip underpinning it all.

This book is both hugely entertaining and a faithful portrait of the months before hostilities began in earnest - as seen, of course, from the quirky eyes and particular milieu of the Provincial Lady, whom we have come to love and admire. Sad, then, that it was to be the last ‘Diary’. However, this recording also contains The Provincial Lady in Russia, the three articles Delafield wrote for Harper’s Magazine in 1937 covering her three-month visit to the USSR. These deft pieces of more personal journalism are again witty, observant and informative, showing how ably Delafield combines a light touch with more serious conclusions.

The three essays are:

The Provincial Lady in Wartimeに寄せられたリスナーの声

I really enjoyed this audio book.
Excellently narrated.
I will look for more with the Provincial Lady.