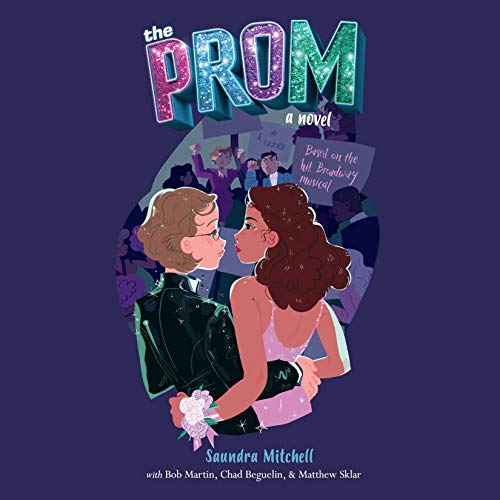 An honest, laugh-out-loud, feel-good novel inspired by the Tony-nominated musical The Prom, read by members of the original Broadway cast!

Seventeen-year-old Emma Nolan wants only one thing before she graduates: to dance with her girlfriend at the senior prom. But in her small town of Edgewater, Indiana, that's like asking for the moon.

Alyssa Greene is her high school's "it" girl: popular, head of the student council, and daughter of the PTA president. She also has a secret. She's been dating Emma for the last year and a half.

When word gets out that Emma plans to bring a girl as her date, it stirs a community-wide uproar that spirals out of control. Now, the PTA, led by Alyssa's mother, is threatening to cancel the prom altogether.

Enter Barry Glickman and Dee Dee Allen, two Broadway stars who decide to take up the cause and get a little publicity along the way. But when they arrive in Indiana to fight on Emma's behalf, their good intentions go quickly south.

Between Emma facing the fray head-on, Alyssa wavering about coming out, and Barry and Dee Dee basking in all the attention, it's the perfect prom storm. Only when this unlikely group comes together do they realize that love is always worth fighting for.

I loved this book

it was such a heartwarming book and I highly recommend, especially if you are part of the lgbtq+ community or any community that faces regular struggles

So the performance is definitely the best part of this audiobook. The writing is odd, and the flow is not always the best, but the narrators makes it way better.

The musical is also so much better, and I highly recommend checking it out if you're interested in this story. But if you want a story about 2 lesbians with a happy ending, this is not the worst book you can listen to.

I love that it actually went into Emma and Allyssa more. Just all around a really good listen. I am gayer than a bucket of wigs

I will cherish this musical and this story forever

As if the story wasn't great enough in the original play, getting this in-depth version focused on Emma and Alyssa and being narrated by them brought me to tears several times. There is so much emotion and truth in this story that works so well in every medium because the essence of it, regardless of the medium, will always be so pure and funny while remaining realistic. I will probably never relate to any character as much as I relate to Emma and Alyssa and I will always cherish this play and this book.

My little heart is dancing

I love this book! This made me happy every single time. Thank you for the amazing listen

After seeing the show in person and meeting Caitlin in person, the book truly melted my heart all over again!

Having seen The Prom on Broadway, this book did a great job with the back story to everything in the show. It answered some questions, and made Emma and Alyssa even more lovable as if that’s even possible. Just like the stage production, it brought laughs and tears. Hearing Caitlin and Izzy do the audiobook was icing on the cake. Well done!