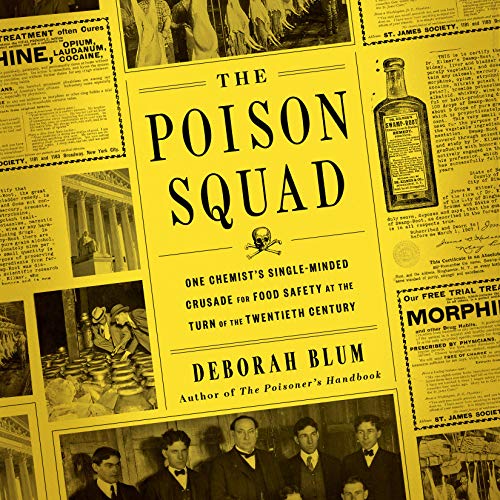 "Full of fascinating detail...a valuable contribution to understanding the politics of food.” (Nature)

“[Blum’s] prose is graceful, and her book is full of vivid, unsettling detail.... The Poison Squad offers a powerful reminder that truth can defeat lies, that government can protect consumers and that an honest public servant can overcome the greed of private interests.” (Eric Schlosser, New York Times Book Review)

“[E]ngrossing.... Blum’s well-informed narrative - complete with intricate battles between industry lobbyists and a coalition of scientists, food activists, and women’s groups - illuminates the birth of the modern regulatory state and its tangle of reformist zeal, policy dog-fights, and occasional overreach.... [A] page-turner.” (Publishers Weekly)

“A detailed, highly readable history of food and drink regulation in the United States.... [The Poison Squad] shows the push and pull of competing economic, political and social interests. The journey our country has taken in establishing food, drink and drug regulation is an important one to understand because it is still going on.” (Wall Street Journal)

The inspiration for PBS's American Experience film The Poison Squad.

From Pulitzer Prize winner and New York Times best-selling author Deborah Blum, the dramatic true story of how food was made safe in the United States and the heroes, led by the inimitable Dr. Harvey Washington Wiley, who fought for change

By the end of 19th century, food was dangerous. Lethal, even. "Milk" might contain formaldehyde, most often used to embalm corpses. Decaying meat was preserved with both salicylic acid, a pharmaceutical chemical, and borax, a compound first identified as a cleaning product. This was not by accident; food manufacturers had rushed to embrace the rise of industrial chemistry and were knowingly selling harmful products. Unchecked by government regulation, basic safety, or even labelling requirements, they put profit before the health of their customers. By some estimates, in New York City alone, thousands of children were killed by "embalmed milk" every year. Citizens - activists, journalists, scientists, and women's groups - began agitating for change. But even as protective measures were enacted in Europe, American corporations blocked even modest regulations. Then, in 1883, Dr. Harvey Washington Wiley, a chemistry professor from Purdue University, was named chief chemist of the agriculture department, and the agency began methodically investigating food and drink fraud, even conducting shocking human tests on groups of young men who came to be known as, "The Poison Squad".

Over the next 30 years, a titanic struggle took place, with the courageous and fascinating Dr. Wiley campaigning indefatigably for food safety and consumer protection. Together with a gallant cast, including the muckraking reporter Upton Sinclair, whose fiction revealed the horrific truth about the Chicago stockyards; Fannie Farmer, then the most famous cookbook author in the country; and Henry J. Heinz, one of the few food producers who actively advocated for pure food, Dr. Wiley changed history. When the landmark 1906 Food and Drug Act was finally passed, it was known across the land, as "Dr. Wiley's Law".

Blum brings to life this timeless and hugely satisfying "David and Goliath" tale with righteous verve and style, driving home the moral imperative of confronting corporate greed and government corruption with a bracing clarity, which speaks resoundingly to the enormous social and political challenges we face today.

As a former Food Chemistry Laboratory Director at the FDA for 31 years I am proud and blessed to be a member of Wiley's professional legacy. We are all global citizens and as such we must be more vigilant in protecting the food supply for all.

Excellent historical account of a public servant. Much respect to Blum!

Amazing how history repeats itself!

Listening to the ways that our lawmakers were owned by corporations in the past, and seeing examples everyday in the news of exactly the same horsesh*t happening today makes me sick to my stomach. We really have not progressed as a society. I loved this book for it's eye-opening ability.

I learned so much!

I never knew what used to be in our food. Amazing! She does such a nice job telling the story.

I was hesitant to read this book because of the title, which suggests the book is about people ingesting poisons as part of an experiment or study. That sounded like it might be a book about sickness, death and the horrors that come with being poisoned. That might be a very long slog. But the so-called "poison squad" is only one small part of this story. And while sickness, death and the horrors of being poisoned do make an unavoidable appearance in the pages of this book, the reader is not accosted on every page with such material. A better title for this book might be "Harvey Wiley and the Battle for Food Safety in America." Much of the book is about legal battles and political maneuvering at the dawn of food safety regulations in America. Some might find such material dry or tedious, but I found it fairly interesting. It certainly made me appreciate the relatively pure and wholesome food we enjoy today. One thing I did not realize was how long arguments over the safety of saccharine and caffeine have been going on. After so much discussion about this, it would have been nice if the book had included information about how these additives are regulated today.

My biggest complaint is the first chapter of the book, which is simply a list of the many people who make an appearance in the book, along with brief descriptions of each. There are dozens (or scores?) of people in this list and it seems to go on and on. I finally skipped this section entirely. I think including it in the audio version of the book was a serious mistake. It should have been provided as a downloadable PDF, or just skipped entirely. The audio book seems fine without it, and is certainly not enhanced by such a long and tedious list.

I thought the reading was more than adequate. But I did notice that a couple of paragraphs that required thick foreign accents seemed like they might have been read by a different narrator.

Couldn't have finished this without the narration.

I bought both the ebook and Audible version of this book and never would have made it through without the narration. The reader did what they could with the material, so I give it an extra star for that here in my Audible rating and review. The content of this book is just so dull. If it were actually about The Poison Squad, what it did, how and why and what the ultimate conclusions of the tests were then that would be interesting. This is a book about politics, though, and how they bs hasn't changed or stopped in over 100 years. So, I do not recommend it, but if it's required for any course that you may be taking then definitely get the narration.

I had read Deborah Blum’s Poisoners handbook years ago. The Poison Squad came out when I first got an audible account and preordered this book because it came with a 5 dollar credit. It took a few years to finally try it out. I still have 3 hours left and do not think I will finish it. I don’t expect this to be helpful because I can’t really put my finger on whether it is the narrator or the story but, it’s just not holding me.

Truth is better than fiction

This book has it all-a love story, backstabbing treachery, commitment in the face of insurmountable odds... history is so much better than a novel. The author has a way of spinning the tale in a very engaging manner. It saddens me to think that we are still dealing with some of the exact same things that they were fighting over 100 years ago-nitrates in foods, aluminum in baking powder, labeling of all ingredients on alcohol, truth and transparency in product labeling, and the corruption of lobbyists influencing political decisions in favor of corporate profits vs the good of the consumer. I highly recommend the book. Worth it from start to finish.

The story of Food Safety I never knew

This read connects the dots that I had heard of but never had all of the pieces of the puzzle. When the dots are connected the big picture emerges!
I now see that things have not changed they have just repeated themselves . Rules, regulations, and laws can and are all manipulated to protect corporations before the people. God bless the scientists who try to protect us!

Excellent and Timely Lesson and Call to Action

The research that went into creating the potrait of a brilliant, dedicated and passionate, though long-suffering and sometimes self-sabotaging character of Dr. Wiley is admirable. As the epilogue clearly states, this book provides a timely look at the history of food regulation and the long-running war between science and politics; as we look at Wiley's discoveries, battles and political roadblocks toward protecting public health through the Pure Foods Act, we are reminded how little has changed in the landscape of pilitics and how crucual both an educated public and tireless crusaders are to ensuring the public good over the interests of business. I enjoyed this book, and I enjoyed the reader's performance. I think she is able to convery Wiley's wry, dry humor very well. <3