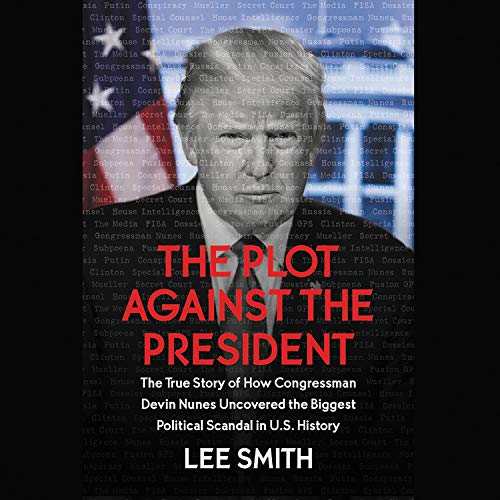 The Plot Against the President

Investigative journalist Lee Smith uses his unprecedented access to Congressman Devin Nunes, former head of the House Intelligence Committee, to expose the deep state operation against the president - and the American people.

Investigative journalist Lee Smith's The Plot Against the President tells the story of how Congressman Devin Nunes uncovered the operation to bring down the commander-in-chief. While popular opinion holds that Russia subverted democratic processes during the 2016 elections, the real damage was done not by Moscow or any other foreign actor. Rather, this was a slow-moving coup engineered by a coterie of the American elite, the "deep state," targeting not only the president, but also the rest of the country. The plot officially began July 31, 2016, with the counterintelligence investigation that the FBI opened to probe Russian infiltration of Donald Trump's presidential campaign. But the bureau never followed any Russians. In fact, it was an operation to sabotage Trump, the candidate, then president-elect, and finally the presidency. The conspirators included political operatives, law enforcement and intelligence officials, and the press.

The plot was uncovered by Nunes, chairman of the House Intelligence Committee, and his investigative team. They understood that the target of the operation wasn't just Trump, but rather the institutions that sustain our republic. A country where operatives use the intelligence and security services to protect their privileges by spying on Americans, coordinating with the press, and using extra-constitutional means to undermine an election then undo a presidency is more like the third world than the republic envisioned by the founding fathers.

Without Nunes and his team, the plot against the president - and against the country - never would have been revealed. Told from the perspective of Nunes and his crack investigators - men and women who banded together to do the right thing at a crucial moment for our democracy - the story of the biggest political scandal in a generation unfolds like a great detective novel, feels like a classic cowboy movie. The congressman from the cattle capital of California really did fight corruption in Washington. Devin Nunes took on the "deep state."

The Plot Against the Presidentに寄せられたリスナーの声

Nunes is a national treasure.

You don’t have to be a supporter of Trump to understand just how corrupt the press and FBI are. In fact, you can hate him. But don’t turn your back on the truth.

Justice Should Be Forthcoming

This book was amazing. I admit I'm a political junkie and followed the Trump/Russia collusion story as best I could, but what was uncovered and revealed in this book should scare the hell out of any American. We have traitors in our midst. They're power hungry statists who don't care about America, its citizens, or its values. Trump has earned my respect. The democrats, and the media that ran, and still run, cover for them, are the enemy within the gates. They must be dealt with.

Well documented expose of a plot to overthrow the United States...FROM THE INSIDE...This is real. This is a wake up call.

Liked the information on the top down corruption, scary. Follows the leftist rebels on their way to sabotage the people of America for power at any cost . I have been following this since the first day , I believe it is the ultimate HOAX, Sad 😢

Truly amazing, shocking, very well researched & documented story. Smith goes thru the story from the “beginning” and documents all the players in a very clear, very well documented, precise manner. A real eye-opener to anyone who wants to know the “back-story”. Interesting, especially now, to see the people in the News whom Smith discusses in this book. Only “negative”: the narrator, Addison C. Reynolds, did a horrific job; his voice was monotone & offered very little inflection. Still, he’s worth tolerating for the fantastic information in this book. I highly recommend it.

This book was so interesting I listened to it Twice

If you want to understand what is going on in politics especially within the Democrat party? Then this book is a MUST READ!

A must read to see the truth

An amazing and detailed report how the Democrats with the assistance of high intelligence staff including those in the Obama administration (his spy chiefs and himself too) plotted from even before President Trump took office to remove him with the false Russian interference in the elections. Leaks of classified information by top intelligence officers to the media was a common and regular occurrence and illegal. It is shameful and disgraceful that the media went along with the Russian conspiracy based on a fake Clinton funded dossier instead of investigating this dishonest and incredible scandal. This is worse than what Nixon did with the spying of the DNC offices. This was outright spying of a President elect and when he was the sitting President and all his transition team. All of them involved in creating, promoting and enabling this spying to remove a sitting president should be criminally charged and prosecuted.

This book is well sourced, easy to understand, detailed as to names and misdeeds of the legion of culprits and is devastating. Devon Nunez deserves our grateful plaudits, he is an American hero. Thank you Lee Smith and especially the Nunez team!!

Who knew we would be witness to an attempted coup in our lifetime? There had better be Justice served for these crimes or it's going to be Pitchforks and Torches time in America.

This book provides a KEY to understanding the FAILURE of the Deep state. Must Read! WWG1WGA

very interesting and a must listen for anybody who doesnt believe what they are being told.

A great insight into the silent workings of the fight for light in a world of deliberate darkness.