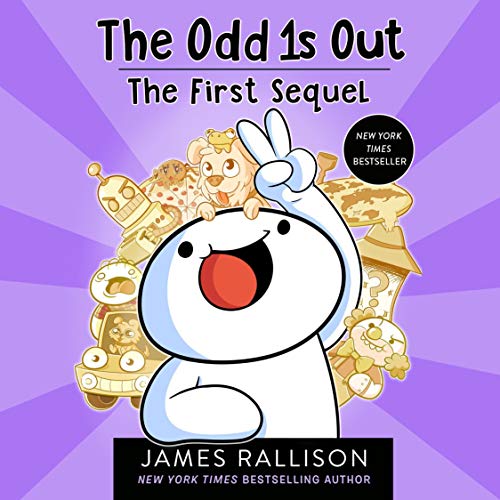 The Odd 1s Out: The First Sequel

The sequel to the New York Times best-selling The Odd 1s Out, with all new and never-before-heard content featuring opinions, stories, and signature characters from YouTube phenomenon James Rallison.

James Rallison has always felt like he was on the outside looking in. His YouTube videos are all about his "odd" behavior, and with more than 13 million subscribers and millions more followers on social media, these animations have found their way into the hearts of fans who also feel like a bit of an odd one.

In this second installment in the Odd 1s Out series, James is back with characters, stories, and opinions, including:

Offering advice on accepting your quirks and growing up in the internet age, The Odd 1s Out: The First Sequel is sure to be a must-have for old and new fans alike.

The Odd 1s Out: The First Sequelに寄せられたリスナーの声

I am a HUGE fan of Theodd1sout and watch his videos all the time. I also really like Audible and audiobooks. So put the two together and you have the most perfectly entertaining wondrous book!!! If you are contemplating buying this book, then I say DEFINITELY, DEFINITELY, DEFINITELY BUY IT!!! I 100% recommend 🤩👏🌟

OMG THIS IS THE BEST

The author's voice is so entertaining!

Such a funny and entertaining book with charming stories from the author's childhood. We are big fans.

I love your vids so I thought I would like this and yes I think it’s really funny thank you!

The book is long and has some humorous moments in it. you should get it.

I love the book. that's all u need to know. also that James is cool 😌

15 chapters of story, a funny induction to James Rallison, or TheOdd1sout has a interesting story to tell I recommend buying his first book (because it’s not on audible) and yea Overall I enjoyed it