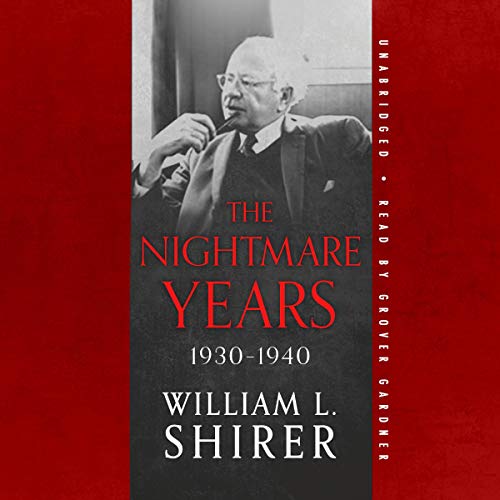 The famous journalist and author of The Rise and Fall of the Third Reich documents his front row seat at the pivotal events leading up to World War II.

In the second of a three-volume series, William L. Shirer tells the story of his own eventful life, detailing the most notable moments of his career as a journalist stationed in Germany during the rise of the Third Reich. Shirer was there while Hitler celebrated his new domination of Germany, unleashed the Blitzkrieg on Poland, and began the conflict that would come to be known as World War II. This remarkable account tells the story of an American reporter caught in a maelstrom of war and politics, desperately trying to warn Europe and the United States about the dangers to come.

This memoir gives listeners a chance to relive one of the most turbulent periods in 20th-century history - painting a stunningly intimate portrait of a dangerous decade.

Shirers book is doubly excellent First by the very nature of the many eyewitness accounts of this man to things in history one can only imagine. Second by the always expert reading by Gardner Listen how Shirer repeatedly comes within easy observing distance of Hitler , Mussolini, Ghandi and countless others
The very best book I have. Of over 2000. Yes it’s that good

Wonderful narration. Having lived through many of those years, it brought so many memories. Having traveled so many years, the descriptions of cafes, neighborhood and streets in Paris and Berlin allowed me to relive my own travels. He speaks of Barcelona, the Estoril in Portugal and the river Tagus. I was able to recall Chamberlin, the Munich treaty, the rail car where the Germans surrendered in ww1 and the French in Ww2. Overall a great read.

Shirer’s writing is always so descriptive. You can see why, with Ed Murrow, he basically invented radio reporting. Grover Gardner is such a brilliant narrator, warm and poignant in his delivery.

The Truth will out

I was born 3 years after the second WW2 ended and grew up regailed by stories of the atrocities committed by the German nation and their allies. My mothers first husband had died of his wounds suffered whilst serving in the Kings Own in Italy 1945. My first job was working for an Austrian who had been a POW and later I served in a Government Dept were my senior officer was an ex member of the SS Hitler jugend division. How on earth can you equate these good men with murderous regime of Adolph Hitler. Now after listening to this brilliant book I can understand the brain washing of a nation. Listen and be warned is it happening again North Korea?