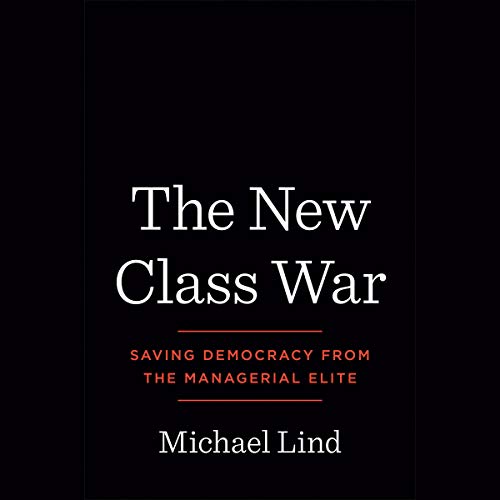 In both Europe and North America, populist movements have shattered existing party systems and thrown governments into turmoil. The embattled establishment claims that these populist insurgencies seek to overthrow liberal democracy. The truth is no less alarming but is more complex: Western democracies are being torn apart by a new class war.

In this controversial and groundbreaking new analysis, Michael Lind, one of America’s leading thinkers, debunks the idea that the insurgencies are primarily the result of bigotry, traces how the breakdown of mid-century class compromises between business and labor led to the conflict, and reveals the real battle lines.

On one side is the managerial overclass - the university-credentialed elite that clusters in high-income hubs and dominates government, the economy and the culture. On the other side is the working class of the low-density heartlands - mostly, but not exclusively, native and white.

The two classes clash over immigration, trade, the environment, and social values, and the managerial class has had the upper hand. As a result of the half-century decline of the institutions that once empowered the working class, power has shifted to the institutions the overclass controls: corporations, executive and judicial branches, universities, and the media.

The class war can resolve in one of three ways:

Lind argues that Western democracies must incorporate working-class majorities of all races, ethnicities, and creeds into decision making in politics, the economy, and culture. Only this class compromise can avert a never-ending cycle of clashes between oligarchs and populists and save democracy.

Monopoly is good... brought to you by Google

Now that I am armed with this information, the author's claims that monopoly isn't bad and automation isn't bad make a lot more sense. The author makes a lot of great points in this book and I agree with 90% of what he has to say. But there is no excuse for this kind of intellectual dishonesty. If you take money from a monopoly company and fire any employees who point out what you are doing, then you lose your right to claim objectivity in your analysis.

Monopoly is bad. Automation killed more American jobs than off-shoring did. You would certainly make these points yourself if your hands weren't tied by your need for funding from Google.

This is one of the most interesting books I've read during the current crisis of conscious bubbling up within the elite. The book isn't necessarily interesting for what it says, its main theses have all been tried and failed and what little new it suggests is essentially just widening the inclusivity of power politics. What is interesting is seeing the authors schizoid perspective in action. He uses the word populist or populism dozens of times without defining it before offering a weak and essentially meaningless definition halfway through. It's clear his definition of populism is policies he likes enacted in ways he finds distasteful. He also constantly refers to various politicians as demagogues, not a flattering word, while making essentially no case for how these positions he advocates would be advanced in ways he wouldn't label demagogic. Then in a turn of Supreme hypocircy promotes a system of interlocking petty demagogues on a smaller scale. It is fascinating to see the author's mind struggle valiantly to grasp what is happening and his own sensitivity to it with his own prejudices and stances. Maybe the best example of this is his constant derision of Trump while advocating essentially all of his policies.


In the end the book is fascinating. It is the account of a sensitive and perceptive elite writing to other elites in order to warn that maybe that sound outside the gates is in fact a mob with pitchforks and not a celebratory carnival. It is a warning, and the facts and issues it presents are accurate. However, it is a warning issued from someone who wishes to find a way to preserve the current order through changes in the appearance of power sharing while avoiding implementing any real policy changes. It is fascinating and worth a read, but I recommend supplementing it with another recent book, The Age of Entitlement, by Caldwell. That book shows that many of Linds ideas, including his largest policy proposal found in the epilogue have already been tried and failed, he just doesn't realize it.

Learn how to Smile as you Kill

While tweetstorms and virtue-signaling rage in America, the real problems of the country go unsolved and unnoticed. That problem is one of class. The managerial elites, and all the rest of us. The managerial elites range from academics, scientists, bureaucrats, politicians, corporate managers, technologists. doctors and professionals, and so on. You've probably encountered them, they take a snotty attitude and act superior, while charging you big bucks for little value.

As John Lennon sang, "there's room at the top they're telling you still, but first you must learn how to smile as you kill, if you want to live like the folks on the hill". They're likely to have a college degree, think a lot of themselves and treat you like dirt if you're not in their tribe. They cluster in large cities, mostly on the coasts. They're likely to set the agenda in the political sphere, think of themselves as the avante-guard, make good money.

Then there's the rest of the people, who tend to cluster in suburbia, exurbia, and small-town America. Also the plebs of the cities who do the dirty work in restaurants, street repair, and garbage pick-up. They have different political views, some like guns, or fishing or working on cars, etc. Then tend to make low wages, have no college degree, and are excluded from the media and politics. They are pandered to during political elections, but otherwise ignored by the political elites.

I'm an artist, so I don't rightly fit in either camp. But I can see that America is more and more divided by these two classes, with the middle class shrinking.

Not very profound or persuasive at all! Not a coherent or conclusive set of arguments. Generalizations and arbitrary classifications that are utterly artificial and forced. Michael Lind is a slayer of strawman arguments and does not confront the steelman arguments of the views he seeks to dismiss. I came away with very little gained knowledge. Don't waste your time or money!

This book gives voice to many of the concerns I've had working in these multinational conglomerates. The management in those companies fall over themselves to be racially and ethnically inclusive, but they silence any opinion that challenges their disdain for those of us who don't have a degree, and who really hate their constant efforts to ship more work overseas. They're building "bias detection" directly into the technologies. Talk about big brother.

I think the author gives Trump too much credit, and I doubt he's actually read the Meuller report. He reports the Russian interference in the 2016 election as the small dollar amount of facebook ads that have been conclusively linked to Russia. What he fails to mention, and probably has political motivations to not mention, is the high likelihood that the exposed facebook operation was just the tip of a mountain-sized iceberg. The Meuller report clearly lays out a massive campaign to support Trump, smear Clinton and deepen the divide between Clinton and Bernie supporters. Trump behaved EXACTLY as one would expect if he were beholden to Putin. I do credit Trump for one thing: he didn't start any new wars.

I'm glad he wrote this book, but it's clear the author has serious politically motivated blindspots. There are many places where he presents right wing political spin as fact. Still, a good book for anyone who can think for themselves and check facts for political spin.

What we’ve been needing

This is the first book we need to try and regain control of our country. I hope to see more along these lines from other others. This book does not take a liberal or conservative perspective.

It seems the author likes to grab a point in time vice using a complete body of work when giving his assessment of a movement or philosophy. Also, the author should understand polls are driven by the design of the question. Polls at times are very weak metrics for broad views of a demographic.

Great book on the neo liberalism taking hold across the west. Good news is that there is still time reverse the trend.

Are we becoming a high tech banana republic?

This is not a page turner but it is an excellent analysis of our current political situation. It’s about more than just class but class is at the heart of it. If I had to list a flaw it would be the absence of any good solution. The author is much better at diagnosing the problem than suggesting what to do about it but diagnosis is not unimportant. The solution shouldn’t be our side has to win.

Will change your paradigm on politics in the econo

This is an excellent book to get a different take and create a different paradigm on what's wrong with our political parties, immigration and our economy and where it is headed in the US and Western Europe. As the author said if changes are not made we are on the path to becoming a high-tech banana republic like Brazil with wealthy managerial elite living in gated communities surrounded by angry working class people. This is not a book that's good for Republicans or good for Democrats as the author points out there are serious issues to be found in both parties and the problems they have created.The main part of the book that readers have to learn to deal with is that it's full of technical details and research that can get deep and boring at times.