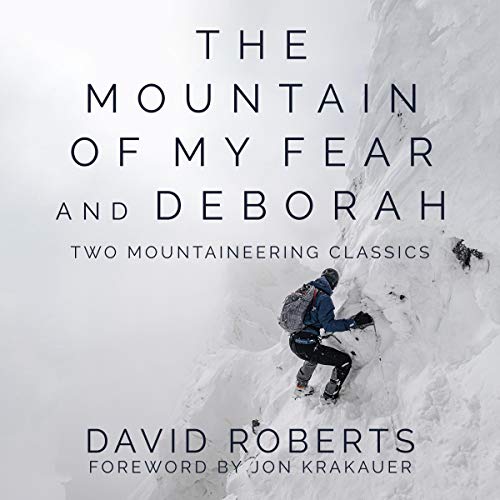 The publication of The Mountain of My Fear in 1968 and Deborah in 1970 changed the face of the mountaineering narrative. Now these two classic expedition narratives by acclaimed writer David Roberts are together again in one volume for a new generation of readers.

Deborah is the story of Roberts's 1964 expedition with fellow Harvard Mountaineering Club member Don Jensen to the eastern side of Mount Deborah in Alaska. Their two-man attempt on the then-unclimbed ridge was a rash and heroic effort. The story tells not only what happened on the mountain, but what happened in the stark isolation to the climbers and their friendship, as each became totally dependent on the other for survival.

In The Mountain of My Fear Roberts and Jensen come together again only a year after the Deborah climb. In this account, they and two other Harvard students attempt an ascent of Mount Huntington, for the first time via its treacherous west face. The summit had been reached only the year before, via one of its less dangerous ridges. The story is one of a magnificent achievement. But it is also the story of how a perfect adventure can turn into tragedy in a single instant.

Mountaineers, lovers of adventure literature, David Roberts fans, and non-climbers who simply enjoy a good story will value this pairing, by a great climber and a great writer, of two dramatic and enlightening works.

The Mountain of My Fear and Deborahに寄せられたリスナーの声

An ass basically murdered his superior friend through arrogance, ignorance of nature that he hates, and a failure who tried to capitalize from HIS so called tragedy. Yes I climb, but don't endanger others, don't write books about it. I don't want to or HAVE to as this fool had to rationalize HIS stupidity to anyone who listen. His rage aimed at anyone and the earth is the only clear thing. Never took any blame. He OF COURSE was blameless. A pseudonym.

As Jon Krakauer commented, David Roberts’ writing capability is extraordinary within the mountaineering genre. I found I was with him during both of these expeditions, feeling what he was feeling and seeing what he was seeing. I am so glad I listen to both of these stories. Now I want to read “Moment of Doubt.”

I love David Roberts' writing and these two books were powerful. I highly recommend reading them, if you love the mountaineering genre. He really describes time and place beautifully, and you feel as though you are taking every step with him. For me, an armchair mountaineer, I will listen to this again and again.