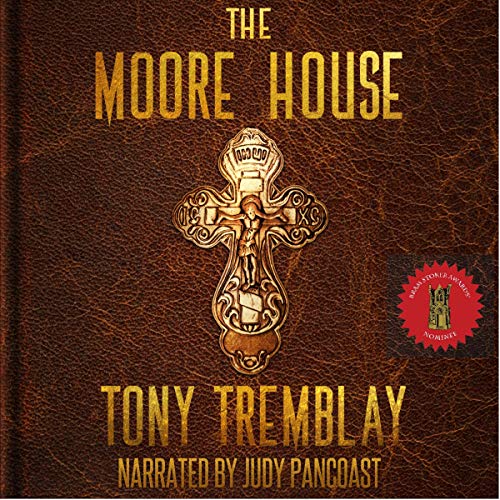 With The Moore House, Tony Tremblay takes us on a terrifying journey. Three excommunicated nuns, Nora, Agnes, and Celeste, join a paranormal unit sanctioned by the Catholic Church, in the hopes for redemption in God’s eyes. As empaths, their jobs are to verify reports of demonic possession, and when their boss, Father MacLeod, is persuaded to investigate a house in a small New Hampshire town, the three women are chosen to assess these claims. Goffstown police files detail numerous extraordinary occurrences at the Moore house, including seven gruesome, unsolved killings. For this reason, the three empaths are instructed to not enter the dwelling, but to employ their abilities while circling outside the house. Nora, Agnes, and Celeste proclaim it free of supernatural forces, but they are wrong...dead wrong.

The three women discover their presence is part of a larger plan. The Moore House is not only possessed, but it soon possesses them, forcing them to relive the sins that had resulted in their excommunications. Their belief in God and redemption dissolving, they become pawns in a demonic scheme, a means to an end, in which Father MacLeod is their only hope. But Father MacLeod has made his own deal with devil, and the devil is ready to collect.

Described as Ghost Story meets The Exorcist, The Moore House will possess you, as well.

A great possession story with some clever twists!

A solid possession novel with a few clever twists.

THE MOORE HOUSE by Tony Tremblay is set up much like a haunted house story. There’s an old house that locals avoid, lots of deaths within its walls, and a mystery surrounding why. But instead of ghosts, we have a demon, and a Catholic priest with a team of “empaths” are brought in to first investigate, then exorcise the house.

The action in this novel comes in quick and sudden bursts throughout. One minute the characters are standing around talking, the next there’s a ferocious attack. These jarring scenes actually work really well in the context of the book, acting less like ‘jump scares’ and more like an in-your-face way of letting you know never to get too comfortable here. Bad things are happening, and worse beings are behind it. Tremblay doesn’t let you forget it, either.

The pacing was solid from start to finish. This isn’t a slow burn story, but it’s staged similarly to one, the main difference being the ferocious acts of violence that reach out and snatch you by the throat when you least expect it. For this reason, THE MOORE HOUSE moves along at a brisk clip, building the tension as the mystery unfolds before us.

Speaking of mysteries, I was also struck at how this novel also moved much like a detective novel from the 40s. Replace Sam Spade with Fr. McCloud, throw in some disgraced nuns with psychic abilities, and you’ll have an idea of what I’m talking about. I really enjoyed this procedural aspect to the book, the search for clues and to just exactly what the name of the demon within is so that the rites of exorcism can be utilized at their fullest strength.

The climax of this story was very satisfying, throwing in some twists I didn’t see coming and I doubt you will either. Tremblay keeps you on your toes as to what the motivations of the various characters are, especially towards the end, and it all served to elevate the suspense and keeping me on the edge of my seat. It’s quite a gripping finale, replete with hand-wringing action and suspense.

The prose is good, the dialogue serving the story well, especially in that ‘mystery novel’ aspect, as they way the people converse reminded me of some older Raymond Chandler and Dashiell Hammet books from many decades past. But none of it rings untrue to the characters and works rather well here, though the setting is modern.

Not your typical ‘haunted house’ story, THE MOORE HOUSE ups the ante by introducing ravenous demons (and some interesting mythos surrounding their creation) in place of disembodied souls, giving the novel a set of teeth far sharper and tearing than it might have otherwise. The characters are flawed but believable, and though some are clearly hypocrites, you end up rooting for them anyway. Why? Because they’re human.

4/5 stars to THE MOORE HOUSE. A story of possession of both person and home, a mystery/detective story cloaked in a cape of horror from the supernatural. If you like stories like this, you’ll be right at home. And both gore lovers and haters alike can be assured, this one is up your alley all at once. The gore is minimal, but when it happens it is striking and horrifying. Not too much, but enough syrup to keep the pancakes tasty.

The narrator does a pretty decent job, I'd listen to some more of her work.

Don’t miss this one. It’s easy to see why it was nominated for the Bram Stoker award.