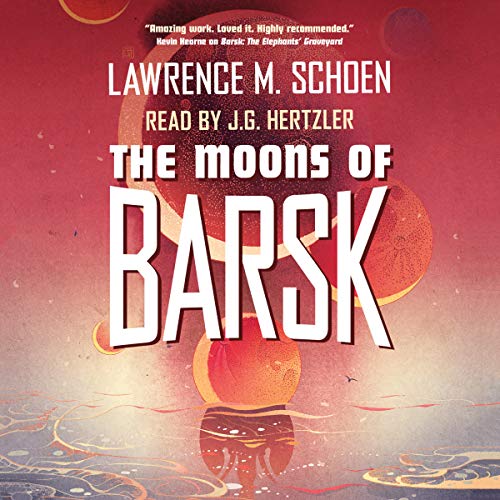 Years after the events of Barsk: The Elephants' Graveyard, the lonely young outcast and physically-challenged Fant, Pizlo, is now a teenager. He still believes he hears voices from the planet’s moons, imparting secret knowledge to him alone. And so embarks on a dangerous voyage to learn the truth behind the messages. His quest will catapult him offworld for the second time is his short life, and reveal things the galaxy isn’t yet ready to know.

Elsewhere, Barsk's Senator Jorl, who can speak with the dead, navigates galactic politics as Barsk's unwelcome representative, and digs even deeper into the past than ever before to discover new truths of his own.

I didnt like this one as much as Barsk the Elephants Graveyard. it took 10 chapters for anything to really happen and the metaphysical breakdowns made my head hurt. I liked it overall, but pace was too slow for my taste

As soon as I saw that a second Barsk book had been released, I knew where my next credit was going, because I'd enjoyed the first one so much. I sometimes listen to books at a higher speed, because there are so many I want to read, and so little time. I didn't do that for The Moons of Barsk, because I wanted to take my time and really enjoy it.

This book builds upon the first story in what feels like a very natural way, but it definitely goes in directions I didn't expect. I loved The Moons of Barsk. I love Pizlo and Jorl. I hope Schoen keeps writing Barsk books and Hertzler keeps narrating them.

The depth and humanity of characters shine, even as they come forth in uplifted "lower" mammal bodies. If anything, with "Moons," Schoen has dug deeper into issues of prejudice, memory and vision all the while telling a great story. There are times he gets a bit too metaphysical for my taste, but not for long. Hertzler is a talented and engaging narrator. He inhabits the two books' many characters well.

Adventuresome walk along the rails

As in all good sci-fi, it’s nothing without the world building, and Larry Schoen gives us a view into a culture which is both wildly different from ours, but subject to the same fears and failings as “people”. I found myself embracing and cheering for the teenage hero of this story all through the fast moving tale. J.G. Herzler did a great job with an absorbing performance of the book. A good listen!