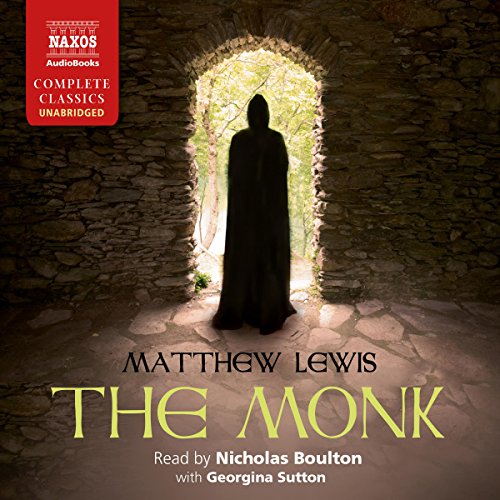 A masterpiece of gothic fiction, The Monk is a cautionary tale of madness, horror, lust, and despair. Father Ambrosio, the most pious and venerated monk in all of Madrid, is held as a paragon of virtue. But after 30 years of study and prayer, evil thoughts begin to permeate his mind.

As two plots cleverly converge, torture, murder, incest, rape, poison, and magic prevail, sustained by an elegance in the writing of the 19-year-old Matthew Lewis.

The book was banned upon its initial publication in 1796, but later caught the attention of Lord Byron and Samuel Taylor Coleridge, with Coleridge naming it "the offspring of no common genius".

Great story with adventure, passion, horror, love and hypocrisy, with a flare of the supernatural.

Not a book that should be overlooked!

Wow. I ran across this book while looking up Gothic novels and alternated between reading my physical copy and listening to this version.
I was not at all disappointed by the characters, plot, or narrators. I don't want to spoil anything for you, so suffice it to say that nothing is extraneous and the ending will be a wild ride. Allow yourself to be swept up in this world and to believe in the characters and you will not be disappointed. I wish I had been half this imaginative when I was 19!!

the Platonic Form of the Gothic novel!.org

The plot moves fast through all the usual yet somehow unexpected architecture, the manors, the convent and monastery, even the catacombs... and the entire cast of good and evil and the nearly good and the seemingly good but really blackest evil characters. The readers' performance was perfect. I can't imagine better. I wanted a great Halloween novel and this was definitely it.

No words; just read it. It is a story that questions salvation, religion, and relationships. If those peak you read it.

Not sure what I was expecting, but by the end I was disappointed and wished I had made a different selection.
I was unable to suspend my disbelief and as such never invested I either the plot or characters.

Great Performances But One For the True Goth Fans

Naxos's edition of "The Monk" is the best audio recording you will find on audible, and on the market (if one exists anymore) more generally. It comes with multiple narrators, and narrators of both genders. It also comes with music and poetical songs that accompany the presence of poetry and music in the text. They are quite beautiful and i would definitely recommend this recording to fans of Gothic fiction, or fans who a familiar with and like Lewis's novel. Regarding the narrative itself, i found the eroticism of the story, specifically its representation of the body and desire, to be incredibly captivating, but I also found the plot to be incredibly convoluted, the story and the historical setting to be lacking in realism, complexity, and depth. By and large, the novel came across as a highly dated form of sublimated pornography. In areas and at times i wanted to keep on listening to find out what next, but in a larger way, i was just glad to say I finally finished "The Monk." Alas it is not going to make my best novels list.

I was enthralled by this book, and the fact that it was written centuries ago was not an obstacle for getting into it. There are many excellent horror moments for the fan of gothic fiction, as well as plenty of humor that still works for modern audiences. I would highly recommend The Monk to anyone interested in the gothic genre who is looking for something substantial with a dark tone.

This is my favorite piece of Gothic fiction

The Monk is sprawling, enthralling, and ridiculous. I have read it numerous times and continue to find it so. Secret dungeons, murderous nuns, mysterious orphans, hidden pregnancies, lots of (18th century style) sex and gore, and that one hilarious scene with the bird (you'll know when you reach it.) To top it off, Satan himself. The narrator attacks the story with both skill and gusto, and the touch of a female voice for certain parts was a nice touch.

The Monk is gothic literature from the 1700’s but it is readable and parts were laugh out load funny. With a dark overtone we learn about the adored monk, Ambrosio, and his noble air. He was found as an infant and was raised in the monastery, and now at 30 years old, he has never left the abbey walls and vows to never leave, never give into temptation, never break his chastity.
Written by a 20 year old member of parliament, this book was banned and destroyed by the critics for its profanity and obscenity, which surged it popularity because everyone wanted to see if it was as lurid as reported.
A ghost called the Bleeding Nun, corruption of the pious, scandals, temptation, Spanish Inquisition, deals with Lucifer himself...this book has it all...murder, torture, lust, abuse of power, arrogance, and sexual desire from the most noble of men. Twists you will never see coming. I definitely understand why it was banned, I can’t imagine the church liked this at all.
There was quite a bit of unnecessary filler but it wasn’t over the top. I listened to the audiobook and it was amazing. There are several poems and songs and are actually sung with a guitar accompaniment.
This was recommended by someone in my classic horror book club after she saw it in Danse Macabre by Stephen King.

This book is excellent. Truly. Matthew Lewis was just nineteen when he wrote this, what were you doing at nineteen? I was trying to figure out how to open bras with one hand, and deciding on the best excuse to use when calling in sick at my job and not get fired. Silly me; I could have been writing one of the greatest Gothic Novels of all time.
I could explain about the plot, the temptation and corruption of Ambrosio; or the subplot, the unjust fate of Agnes. Rather, I'll avoid giving spoilers and just say that anyone who thinks eighteenth century literature is boring needs to read this.
The narration is perfect. Highly recommend.

Audible exists for this. This is an old book and a long book and although the story is excellent and utterly engrossing, I think if I had only the print version then the experience would have been very different.

The narrator acts the story and does so superbly. There are moments when a character sings a song and an actual song, with music, plays.

As I said, utterly engrossing.