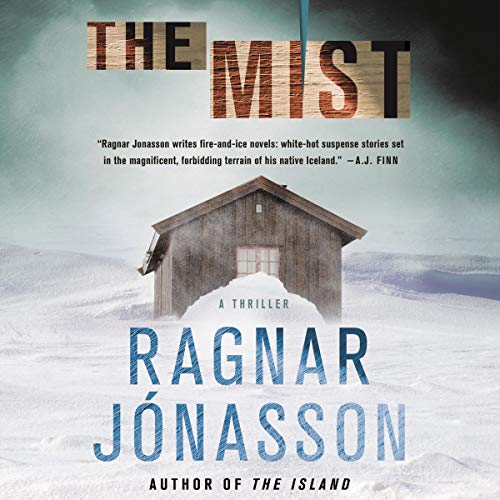 It's 1987. An isolated farm house in the east of Iceland. The snowstorm should have shut everybody out. But it didn't.

The couple should never have let him in. But they did.

An unexpected guest, a liar, a killer. Not all will survive the night. And Detective Hulda will be haunted forever.

"If you’re looking for a fictional good fright to distract you from the real ones, look no further than this third entry in the Hidden Iceland series , featuring brainy, glum police inspector Hulda Hermannsdottir." (Washington Post)

A little bit perfect. I've listened to this twice. The first listening with its
"what happens nex t" left me thinking
this book is a loser. I listened again - this time I got it. The author
has crafted a fine story, so rich in character and place I almost missed it. If you like these hidden gems, here is another book for you.

You’re in for a great ride. Full of atmosphere, tension, twists and turns with a satisfying end...well done.

I finished this series in record time--it was so good I didn't want to stop listening. Ragnar Jonasson is a very gifted writer.

I kept waiting to enjoy this… it never happened

I had been looking for a new author to really enjoy- I am a huge mystery fan and had literally run out of people to read so I was excited when a whole collection were recommended. Maybe I started on the wrong one but I keep waiting to enjoy this listen- it never happened. Narrator was excellent though.

the most boring thriller ever

the plot is weak
the personalities shallow as cardboard
the writing is terrible. the writer repeats the same boring elements of the story time and again....without any progress in the storyline
the narrator seems as bored by the plot as i was

i strongly suggest not wasting your time on this book

This is an absolutely wonderful read. As usual, the character development is superb, the sense of place is firmly and clearly established. You feel transported to this dark, severe, and bleak yet stunningly beautiful place. The narration is perfect and could not be improved upon. She kills it! This story is very well told, well written and unputdownable. Honestly I wish I could get into his other stuff like Snowblind, etc but I tried a couple of those and I guess it’s just different I could not ever really get into it. I may try again though. I’ve listened to most of the Hulda books twice and they are just as good if not better the second go round. That’s just yay.
Thank you Ragnar Jonasson!
Thank you Amanda Redman!