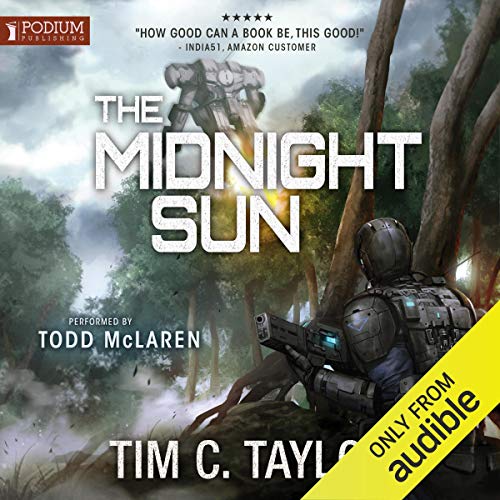 War has come to the worlds of Humans. The rich planet of Tau-Rietzke, however, is far from Earth and the Mercenary Guild’s invasion, and its alien-registered mercenary companies are a safe haven for humans on the run. Organizations like the Midnight Sun Free Company.

Having just completed another successful mission and taken possession of three Raknars, it was party time for Saisho Branco and the personnel of the Midnight Sun, and they were enjoying a little down time...until the war spilled over into their corner of the galaxy and two competing mercenary organizations showed up to steal the Raknars.

But no one takes the company owner’s toys, and Gloriana has given the Midnight Sun a new mission: return the Raknars to her at any cost…or don’t return at all.

This is the hardest mission the Midnight Sun has ever taken, and it will test not only the military prowess of the company, but also its members’ loyalties as well. When everyone is against you, and your race calls you to war, do you heed the call or continue to trust your shadowy employer? Outnumbered and outgunned, the Midnight Sun must decide whether to fight or to give up the Raknars and save their lives. Little do they know, it’s a decision that will impact the war being fought hundreds of light years away!

This book 2 is not a continuation of book 1. I noticed that it is by a different author and at first I thought that this is a good way to get a series of books released in short order and maintaining continuity and adherence to an overall story arc...NO. This is a tangentially derivative tale with all different characters that I care nothing about that spend a lot of time ensuring that the story does not go anywhere.

Despite a new set of characters I gave it a try just to get back to the 4 Horseman without being lost. It was very well written and performed. 4 1/2 stars!!!

has a 10 ft tall spider alien ever made you cry?

truly epic nonstop scifi action. great story, love the development and if you dont fall in love with Betty you have no heart

Tim C. Taylor creates what appears to be a tangential story arc to the main Omega War series by authors Chris Kennedy and Mark Wandrey. Even so, the characters and their interactions with opposing forces make for exciting encounter. There are acts of betrayal, romantic elements (somewhat stunted and awkward but meant to be written that way), heroism, intrigue and good boots on the ground action. While the two sisters were the obvious MCs, the involvement of Saisho Branco was somewhat odd. He plays a pivotal role but one that is bewildering and left as somewhat of a mystery. His final disposition was a bit gruesome and more than a little weird.

I enjoyed the story and appreciated Todd McLaren's narration of it.

Just not what I was looking for.

I didn't like the mood the reader set. I was uncomfortable with the way this story was presented. It had it's moments but they were too few and far between.

This is a great continuation of the omega war portion of the 4 horsemen universe. I eagerly await the next book. This team of authors really knows how to tell a good story